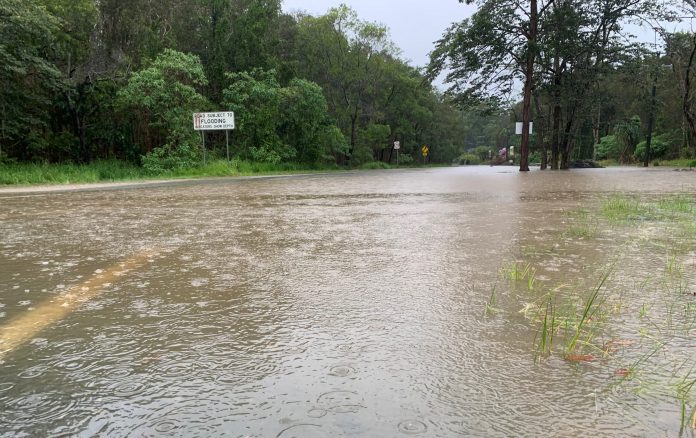 A woman’s body has been recovered from a submerged car in the Sunshine Coast hinterland as authorities warn of more dangerous weather.

Sunshine Coast Police District Superintendent Craig Hawkins said the driver, the sole occupant of the vehicle, had died on a flooded road at Belli Park, west of Eumundi on Wednesday morning.

At 4.45am, police received a report of a submerged vehicle on Skyring Creek Road.

Initially, emergency services were unable to access it due to the conditions, but at 8am located a deceased 63-year-old Belli Park woman.

Superintendent Hawkins said a number of people had been rescued in separate incidents, and up to 10 were missing.

“Unfortunately, we have seen the catastrophic consequences of going out in such terrible conditions and the message to motorists is: ‘if it’s flooded, forget it’.”

Flash flooding is occurring throughout the region as residents are warned to brace for more severe weather over the next 48 hours.

Northern parts of the Sunshine Coast and Gympie are experiencing the most treacherous conditions after “intense rainfall” that saw 150mm to 250mm dumped in a matter of hours.

By the weekend, further widespread accumulated rainfalls of 250-500mm are likely across South-East Queensland, with much higher isolated falls.

A Flood Watch was issued Wednesday morning with residents in the Sunshine Coast Local Government Area warned “roads and bridges may be impacted” and to “stay off roads if possible”.

“Rivers and creeks across the Sunshine Coast are responding to heavy rainfall recorded overnight Tuesday and into Wednesday morning, leading to localised flooding,” the Bureau of Meteorology said.

“A severe weather warning is current for the Southeast Coast and parts of the Wide Bay and Burnett Forecast Districts.

“A strong upper trough and associated cut-off low will move slowly eastward across the southern interior of Queensland during today and into Thursday, before moving offshore on Friday. A surface trough near the southeast coast will deepen in response to this upper weather system. The surface trough is forecast to remain slow-moving through Thursday, producing periods of heavy to intense rainfall over the next few days.”

The BOM said heavy rainfall that could lead to flash flooding was expected between Double Island Point, Toowoomba and Northeast NSW.

The severe weather experienced at Gympie and northern parts of the Coast was expected to extend south to Brisbane and the Gold Coast.

Residents are urged to avoid all unnecessary travel. If travel is absolutely necessary, drive carefully and to the conditions – never drive through flood waters. Significant rainfall is expected to continue for the next three days and some parts of the Sunshine Coast have received more than 300mm over the last 24 hours.

“You can help keep them, yourself and your loved ones safe by staying off the roads when possible and please never drive through flood waters.

“An evacuation centre has been opened at Nambour Showgrounds and able to accept people and animals.”

More information and details on road closures can be found on council’s Disaster Hub website  https://disasterhub.sunshinecoast.qld.gov.au

Gympie Regional Council issued an Emergency Alert to all residents in the local government area regarding flash flooding.

Residents are being advised that roads and bridges may be impacted by flash flooding and they should stay tuned to the Bureau of Meteorology for further information.

Localised flooding is occurring. Rainfall totals of between 30-150mm have been recorded in the catchment area since 9am Tuesday. Further heavy rainfall is forecast for the next few days, which may lead to further river level rises.

Minor flooding may occur along the Mooloolah River.

The river level at Palmview is currently at 0.85m (below minor) and rising with the tide. The Mooloolah River at Palmview may reach the minor flood level (4.5m) Wednesday afternoon, with forecast heavy rainfall.

Moderate flooding may occur along the Mary River to Gympie.

Minor flooding may occur along the Mary River downstream of Gympie to Miva.

Strong creek level rises and minor flooding are occurring along the Tinana Creek at Tagigan Road.

For latest updates, go to www.bom.gov.au