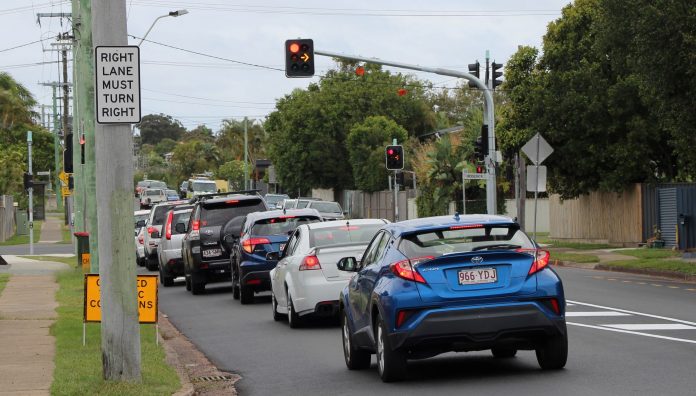 Infuriating lane changes that turned a beachside intersection into a traffic nightmare will be reversed.

Sunshine Coast Council is notifying residents at Moffat Beach that the controversial southbound right-turn only lane, introduced at the intersection of Buccleugh and Roderick Street late last year, will revert to a through lane.

The alteration had forced all the traffic heading to the surf, or south to Caloundra into one lane and vehicles were regularly queued back to Dicky Beach almost 1km away.

We later reported lengthy delays, confusion and an accident had kept the spotlight on the busy thoroughfare as the chaos continued despite council monitoring traffic flow and reinstating sensors.

In December, following the community pushback, Council told SCN it would review the changes and was “considering all options”.

In January, former Sunshine Coast deputy mayor Tim Dwyer joined the protest, saying he was “dumbfounded” by the council decision that made no sense.

SCN also revealed the concerns of Sunshine Coast Bicycle Touring Club president, Michael Jacobson, who said accidents had become more likely due to the right-turn only lane with cyclists risking life and limb when they travelled through the popular area.

Sunshine Coast Council on Thursday said it had taken on board community feedback and would make lane changes at the busy Moffat Beach intersection.

The dedicated right turn southbound lane at the intersection of Buccleugh and Roderick streets will change to a through lane in coming weeks and, once works are completed, it is expected the current queue lengths will be reduced.

“The traffic engineers recommended that we remove the right turn only lane into Roderick Street west and, for safety reasons, remove the ability to turn right into that street,” Cr Landsberg said.

“As a result, the right turn lane will be changed to a through-lane only, and the left lane will allow both left turns and through-traffic for Buccleugh Street’s southbound motorists.

“This will make the intersection more efficient and is anticipated to reduce queue lengths on all approaches.

“To minimise inconvenience, these works are scheduled to be completed before the Easter break, weather and site conditions permitting.

“We thank everyone for their patience while we undertake these works and thank the community for raising their concerns.

“We also apologise for any inconvenience caused as a result of traffic delays since changes were made in November.

“Council will continue to keep the community informed as we progress scheduling.”

Council is notifying the surrounding residents and businesses of the upcoming improvements.