New routes as low-cost airline sets up HQ on Coast

New routes as low-cost airline sets up HQ on Coast 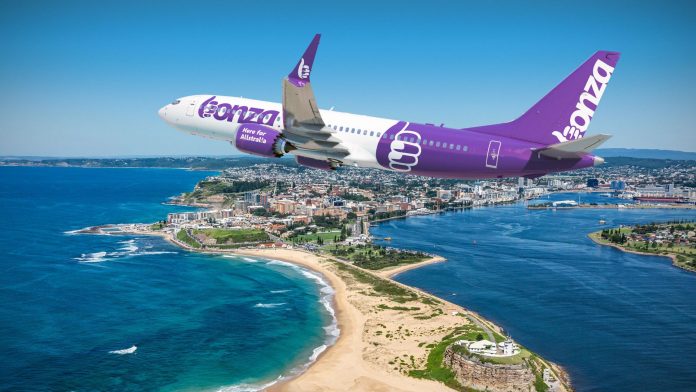 In one of the largest launch announcements in Australian aviation history, Sunshine Coast Airport was on Tuesday named as the first airport base and head office location for the nation’s only independent carrier, Bonza.

The carrier is opening up exciting routes to provincial towns in Queensland, NSW and Victoria through its fleet of Boeing 737 MAX aircraft.

The historic partnership with our airport, will see Bonza initially operate 37 flights per week on 12 routes from the Sunshine Coast, nine of which have never been serviced from here.

Bonza’s presence also will generate around $86 million in visitor expenditure in the first 12 months, and bring an additional 367,000 seats directly into the region.

At its launch on Tuesday morning at Sunshine Coast Airport, Bonza unveiled its new 737 MAX aircraft with finishing touches applied.

The purple theme was continued with The Big Pineapple tourist attraction at Woombye going purple to mark the historic aviation news.

An initial two aircraft (and one “spare”) will be based at Sunshine Coast Airport, with another two at Melbourne Airport: the second Bonza base. Bonza plans to operate up to eight aircraft in its first year of operation.

In October last year, Bonza announced it was taking to Australian skies and promised not to fly the golden triangle between Australia’s three largest cities — Sydney, Melbourne and Brisbane.

Bonza CEO Tim Jordan said this week’s announcement delivered on that promise to give people in the regions more choice.

“From our two bases on the Sunshine Coast and Melbourne, we will give Aussies more options at ultra-low fares to explore their own backyard,” Mr Jordan said.

“Aussies can look forward to enjoying more time at their destination and spending less of their hard-earned cash getting there in the first place.”

“Amongst the reasons we are so excited to partner with Sunshine Coast Airport is our shared values and commitment to customers, community and sustainability,” he said.

“The airport has been incredibly welcoming to Bonza. Their region has boomed in recent years and the people who call it home deserve more choice when it comes to holidays and reconnecting with friends and family.

“From Albury to the Whitsundays, Sunshine Coast locals will now be able to fly instead of impossibly long road trips, as well as fly direct without a stopover in a major city.

“We’re also equally excited about opening up the Sunshine Coast to leisure travellers looking to visit the recently announced No.1 most-loved destination according to the Tourism Sentiment Index.”

Bonza’s executive chairman Rick Howell, from 777 Partners – the investment company backing the airline – said his company firmly believed in the opportunity Bonza presented to democratise air travel for all Aussies and provide independent choice to a market long deprived of it.

“Our brand new fleet of 737 MAX aircraft, the youngest, most technologically advanced and most efficient in Australia, will ensure more Aussies get to travel at low prices but with the bar set high on the quality of their experience with us,” he said.

“Although some airlines in the past have connected the two, low-cost travel does not mean low-quality travel.  We’re investing in advanced aircraft to bring the opportunity for low fares along with great environmental efficiencies.”

Sunshine Coast Airport CEO Andrew Brodie said the partnership was a great win, not just for the airport, but also for the Sunshine Coast region as a whole.

“As Bonza sets up their backyard here on the Sunshine Coast, it will open up a range of opportunities for employment, business development, tourism growth and in re-connecting with family, friends and colleagues,” he said.

“Through our latest modelling and forecasting, and based on Bonza’s current schedule, we estimate that Bonza’s presence here on the Sunshine Coast will generate around $86 million in visitor expenditure in the region in the first 12 months of flights being operational, and bring an additional 367,000 seats directly into the Sunshine Coast.

“With three aircraft based here on the Sunshine Coast and the influx of travellers from new destinations, a range of direct and indirect employment opportunities will be created to support tourism and business growth.”

“Sunshine Coast Airport’s increased domestic connectivity will spearhead the region’s recovery with 16 destinations connected to the Sunshine Coast when Bonza takes flight, up from three pre-COVID, boosting us from 10th to the second-most-connected airport in Queensland,” he said.

The Sunshine Coast Airport head office won’t be a traditional set-up either, instead being coined as “Bonza Backyard”, bringing future job opportunities to the region as well as providing a home for “Bonza Legends” to collaborate in person as needed, with a large proportion of roles to be based virtually all over the country.

“Bonza’s Backyard at Sunshine Coast Airport provides us with an ideal base for our virtual workforce to come together – just as Aussies do in their own backyards. We can’t think of a better location,” Mr Jordan said.

The Fly Bonza app has been launched as part of commitment to a paperless experience –complimenting Sunshine Coast Airport’s status as Australia’s first carbon neutral airport.

Mr Jordan said Bonza’s decision to go paperless with the launch of its own app represented a commitment to technology that was part of a broader focus on customer experience and sustainability.

“We encourage everyone to download the new app to be the first in the know as to when flights will be going on sale, fare sales, destination news and travel tips,” he said.

“We’re also giving people the chance to win flights via the app.”

Once all functions are added in coming weeks, the app will be where Aussies can plan, book and manage their bookings.

Travellers will be able to check in and access their boarding passes, eliminating the need for printing unnecessarily and reducing the need to check-in at the airport. Once onboard, the retail offering, travel information and other details will be available exclusively through the app.

“Never before have the settings been better to challenge the norms to support a streamlined customer-engagement experience and focussing on sustainability from day one by removing the need for traditional paper-based processes,” Mr Jordan said.

The Fly Bonza app is available on the Apple App Store or Google Play now.

Flights are due to go on sale within the next two months with Bonza’s first flight date subject to regulatory approval.