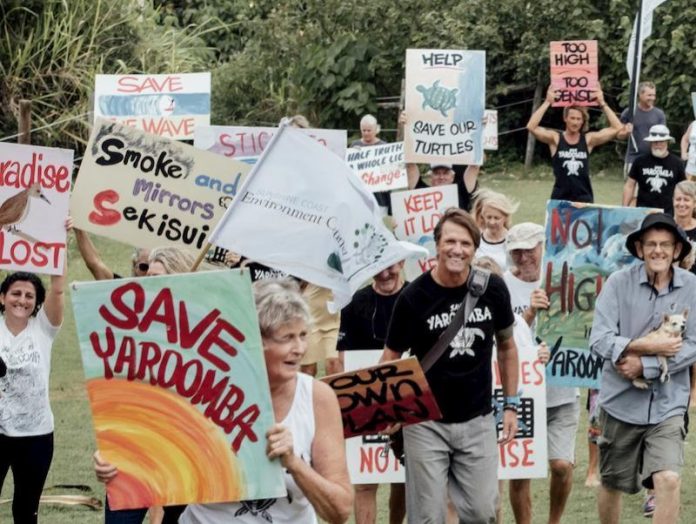 The community has won its epic legal battle against the controversial $900 million Sekisui development after a decision was finally handed down in the Supreme Court.

Save Yaroomba campaign spokesperson Kathryn Hyman said “champagne corks are flying” after they waited nearly a year for three judges to consider their appeal.

The judgement, released on Wednesday, set aside a ruling made in June 2020 when the Planning and Environment Court (P&E) dismissed the community’s appeal against the project’s approval by council.

The detail of the 23-page judgement of Morrison, McMurdo and Burns was posted online mid-morning.

The trio found the previous P&E court decision had erred by not adequately considering the community’s expectations relating to building heights.

The Sekisui beachfront estate in Yaroomba included apartments and two and three-storey homes, community open spaces and a seven-storey hotel (the Coast’s first 5-star resort in 30 years), and was expected to create hundreds of local jobs.

Sekisui House issued a statement saying it would “consider its options” in response to the Court of Appeal decision.

Project Director Evan Aldridge said the options open to Sekisui House were to:

“Given the previous approval issued by the Sunshine Coast Council in June 2018 and subsequently the Planning and Environment Court’s decision in June 2020 to uphold the approval, we are disappointed with the court’s ruling.” he said.

A Sunshine Coast Council spokesperson said it was reviewing the judgement in its entirety.

“It’s important to note that the case will be remitted back to the Planning and Environment Court for further consideration according to law.  As such, the matter remains before the Courts.

“Council will await the outcome from the Planning and Environment Court’s further consideration of this case.”

In the judges’ findings, they said the previous court’s decision supporting the development’s approval was affected by “three errors of law’’.

These related to “a central question … whether the proposed development complied with the height of buildings and structures overlay code.’’

“First, there was no base to work from because the primary judge did not find what the expectations of the local community were as to the height of buildings and structures in the proposed development,’’ the Supreme Court judges said in their judgement.

“Although her Honour noted substantial opposition to the development and, by implication, concerns about the height of some of the buildings and structures, no finding was made as to the local community’s expectations regarding height,” they said.

“Second, although the planning scheme may be regarded as a prima facie expression of what will constitute, in the public interest, the appropriate development of the land, there was in this case a credible source of evidence as to the expectations of the local community, and a substantial one at that.

“The court was required to take that evidence into account as part of the common material but that did not occur because any opposition to the proposed development was seen to be trumped by the planning scheme. This was another error of law.

“Third … the primary judge had no regard to the version of the planning scheme current at the time of the appeal.’’

Ms Hyman said the community had been brave to pursue the legal fight against the Sunshine Coast Council’s approval of the Sekisui development.

She said the Supreme Court decision would set an important precedent for developments in the future that were not in keeping with the town plan.

“That’s the lesson that they’ve been taught, if they do that again there will be a mass objection, unless they do something in line with those community expectations,” said Ms Hyman.

“I believe Sekisui can come back and relodge an (development) application (with council).

“So hopefully if Sekisui does come back with another application for that site they need to meet that expectation and do that site justice and hopefully next time they can get the community on board to work with them and actually support their proposal.

“Perhaps now they can be a bit more sensitive to the expectations of the community that is found in the planning scheme which is what we have been arguing from the beginning.”

The Sekisui development was initially was approved by council in 2018 despite a mass community uprising and some 9000 submissions opposed to it.

The community appealed that decision in the Planning and Environment Court but the council’s approval was upheld in June 2020.

The community, led by the local group Development Watch, then lodged an appeal in March 2021 in the Supreme Court.

A decision had been expected in June last year but it was drawn out for months which Ms Hyman said showed that it was being carefully scrutinised.

Ms Hyman said the community had proven naysayers wrong who had said they were fighting a lost cause.

She said it was so brave for the people to have those points of law tested in the court again.

“Your home is where your heart is, that’s why people are prepared to fight and defend for the love if it and you know it’s certainly shown it’s certainly worthwhile.

“I want to thank the community for sticking with it. Thank Friends of Yaroomba who did endless, endless events and Development Watch who led the appeal.

“It’s just been a team effort and couldn’t have been done without those arms.”

Ms Hyman said the court decision proved the value of the planning scheme and consulting with residents.

“We want development, we need development, but it must conform with community expectations in the planning scheme,” she said.

“It must be respected just like Joe Bloggs if he’s building his house or renovating his carport. There is an expectation we all comply with that book of rules.”

She said the community had raised half a million dollars to cover its legal bills.

“Half a million dollars is nothing against the deep pockets of big corp and even the ratepayer-funded council,” she said.