'No sentence will cure their grief': crane driver avoids jail over devastating crash 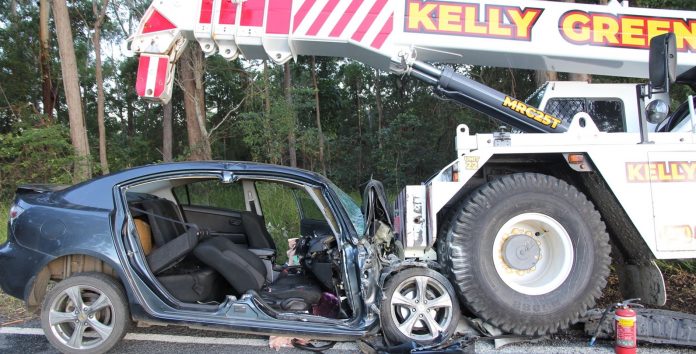 A crane driver has avoided jail despite admitting causing a crash at Ilkley that killed an unborn baby and left two young women with catastrophic injuries.

Russell Leslie Curtis, 41, veered onto the wrong side of Ilkley Road after he lost control of his 24-tonne crane on gravel, hitting a Mazda sedan head-on in March last year.

The driver of the car, Harlee Henderson, 19, and her childhood friend and passenger Charlotte Harris, 20, both of Mooloolah Valley, were critically injured.

Ms Henderson was left with broken femurs, tibia, ankle and ribs and had to undergo an emergency caesarean.

Police prosecutor Sgt Amanda Brewer told the Maroochydore Magistrates Court that at the time of the incident Ms Henderson was 26 weeks’ pregnant with a baby boy, who subsequently died.

Sgt Brewer said Curtis had expressed deep remorse, but that he “lacked due care and attention that a reasonable and prudent professional driver would exercise”.

“His carelessness had led to a tragic outcome of which denunciation and personal and public deterrence is needed,” Sgt Brewer told the court.

Curtis, a professional driver for more than 10 years and an employee of Borger Cranes, pleaded guilty in the Maroochydore Magistrates Court to driving without due care and attention, causing grievous bodily harm.

His barrister, Timothy Ryan, said Curtis acknowledged his guilty plea would mean an automatic suspension of his driver’s licence, which would mean he would lose his job as a crane driver with Borger.

The maximum penalties for the charge are 12 months’ jail, a $24,000 fine and a minimum six-month driving disqualification.

The prosecution had sought a penalty of five months in jail to be suspended, a suspension of Curtis’s driver’s licence for nine months and a conviction to be recorded.

Magistrate Haydn Stjernqvist fined Curtis $3000, ordered he pay each of the two women $1000 compensation, disqualified him from driving for six months and ordered that a conviction not be recorded.

“It is pertinent to take note of the pain and suffering and grief this incident has caused, and also that collectively the two women project a sense of luck that they are here today with their loved ones,” Mr Stjernqvist said.

“There are four victims: three – Harlee Henderson, Charlotte Harris and Ms Henderson’s partner Sam Noble – have given detailed and articulate victim impact statements. The fourth is the child lost. No sentence will cure their grief, but hopefully time will.”

Ms Henderson and Ms Harris, who were supported by friends and family, said outside the court while nothing could undo the incident, the lack of a recorded conviction and small sum in compensation felt inadequate.

“It is good to have this part over, but both of us have to have more surgery, so in some ways it has just started for us,” Ms Harris said.