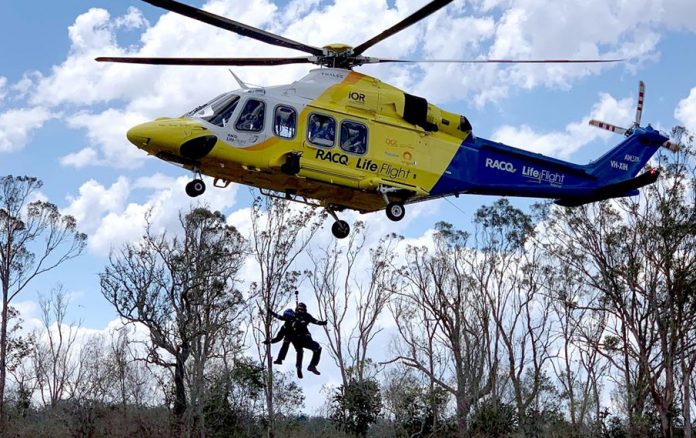 Those airlifts were valued at $13.7 million and saw the crews spend more than 750 hours in the air.

“We operate 365 days a year, 24/7, and we’re always ready for action, ensuring we can get critical medical care to people in need, as quickly as possible,” Mr Guthrie said.

The crews were called to a wide range of missions, including almost 100 motor vehicle incidents and 16 searches.

“We’re very proud that we’ve been able to make such a difference across Queensland in 2021.”

Motor vehicle incidents came in as the second highest reason for callouts.

“Predominantly, these include crashes on and off road, as well as quad bike incidents,” Mr Guthrie said.

“Our crews are able to respond quickly, land on a hospital helipad and get critical patients straight into an emergency department or an ICU.”

One of the many jobs that showed the agility of the highly-trained crews included a tasking to a beach in the Gympie region, after a man was injured in an explosion during a barbecue.

The chopper hovered low over the sand, to allow the aeromedical team to carefully step off the aircraft and treat the patient at the scene.

The service’s long term naming rights sponsor, RACQ, has urged drivers to put safety first, to reduce the number of serious crashes on roads in the region.

“RACQ LifeFlight Rescue does an incredible job but we don’t want drivers meeting the crew because of a crash,” she said.

“It’s very simple, people need to remember the Fatal Five when they get behind the wheel.

“Wear a seatbelt, don’t speed, don’t drive if you’re tired or affected by drugs or alcohol and don’t be distracted.”

Across the state, RACQ LifeFlight Rescue’s fleet of community helicopters, Air Ambulance jets and Critical Care Doctors performed 6846 missions, which was a record for the service.

The service is funded by a combination of a service agreement with the Queensland Government, community fundraising, the sponsorship of RACQ and profit-for-purpose enterprises.

“The continuing demand on the service highlights how important it is that the community’s generosity keeps coming,” Mr Guthrie said.