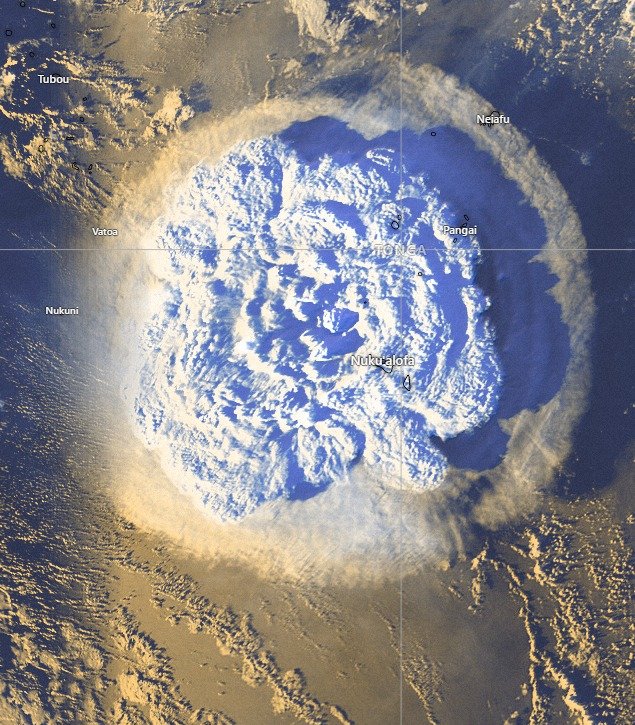 The Sunshine Coast was included in a tsunami warning for Australia’s east coast, with people told to “to leave the water and move away from the immediate water’s edge”.

The warning on Sunday morning was issued after an underwater volcano erupted off Tonga, sending large waves crashing ashore on the island kingdom and triggering tsunami alerts across parts of the Pacific.

The giant eruption of the Hunga-Tonga-Hunga-Ha’apai volcano on Saturday, which was heard across the Pacific and as far as the USA, triggered a tsunami in Tonga.

Local media on the island chain reported a downpour of ash, the flooding of properties and disruptions to phone and power connections.

Tsunami videos out of Tonga 🇹🇴 this afternoon following the Volcano Eruption. pic.twitter.com/JTIcEdbpGe

In Queensland the marine warning is in place for Sandy Cape to Point Danger including the Fraser Island coast, Sunshine Coast waters, Moreton Bay and Gold Coast waters.

“While evacuations are not necessary for marine warning zones, people in these areas are advised to leave the water and move away from the immediate water’s edge.”

“There will be many waves and the first wave may not be the largest.”

The bureau said a tsunami wave height of 1.27 metres was observed on Norfolk Island at 9pm AEDT and an 82cm wave was registered on the Gold Coast at 10.54pm AEDT on Saturday.

Countries around the Pacific were also on alert, with the southern Japanese island of Chichijima recording a 75cm wave at 1am AEDT.

Authorities across the Pacific, including in Samoa, Fiji and New Zealand, issued tsunami alerts, warning people to stay away from coastal areas due to the possibility of strong and unusual currents and unpredictable surges.

“People in or near the sea should move out of the water, off beaches and shore areas and away from harbours, rivers and estuaries,” the New Zealand National Emergency Management Agency warned.

The volcano is located 65km from Tonga’s capital and about 2000 kilometres northeast of New Zealand.

Fiji issued a tsunami warning, urging residents to avoid the shorelines “due to strong currents and dangerous waves”.

Jese Tuisinu, a television reporter at Fiji One, posted a video on Twitter showing large waves crashing ashore, with people trying to flee in their cars.

“It is literally dark in parts of Tonga and people are rushing to safety following the eruption,” he said.

Residents of American Samoa were alerted to a tsunami warning by local broadcasters as well as church bells that rang territory-wide as an outdoor siren warning system was out of service.

As night fell, there were no reports of any damage and the US-based Pacific Tsunami Warning Center cancelled the alert.

The volcano was erupting intermittently in late December but Friday’s eruption was about seven times more powerful than the previous eruption, Tonga Geological Services said.
with reporting from AP and Reuters.