'You never really stop being a surfer': Baby Boomers ride an endless summer 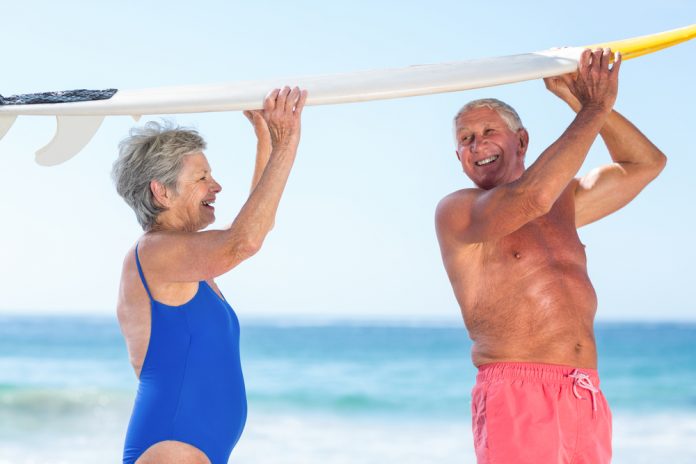 Surf’s up, the sun is shining, the waves are rolling in and South-East Queensland’s silver surfers are heading for the beach in numbers that might surprise you.

In 1966, the seminal surfing film Endless Summer expressed the idea of following the seasons around the world on a surfboard, searching for the perfect wave and endless sunshine.

Back then, we beach-loving Queenslanders felt pretty smug.

Thanks to our climate we already had an endless summer and just about anyone who grew up within an hour or so of the sea was affected by the fast-developing surfing culture — even if they never owned a board.

Every weekend, young surfers and their girls set out in their old bangers to point breaks north and south of Brisbane.

Surfboard manufacturers and shops selling associated merchandise sprang up from Noosa to Coolangatta.

The Beach Boys and Jan and Dean played on our transistor radios. We watched films and TV shows with surfing themes.

Local surfing identities like Peter Troy, Ken Adler and Hayden Kenny were our heroes, along with national legends like Rabbit Bartholomew and Phyllis O’Donnell.

And if we didn’t surf ourselves we loved to watch others doing it and were proud of our surfie culture.

Let’s go surfin’ now, everybody’s learning how, come on a safari with me …”

And many of those Baby Boomers from the 60s and 70s are still riding the waves today in their 60s and 70s, and competing just as fiercely too.

Phil Jarratt is among them.

Now 70, he is still working and still surfing and his iconic status in the surfing community comes from years of writing and photographing for the world’s leading surfing magazines (plus Playboy, among others).

He also produces films, writes books, mixes with surfing royalty and has held executive positions with Rip Curl and Quiksilver, which took him to live in France and California.

In 1998, he co-founded the Noosa Festival of Surfing, which is known for the high number of competitors in its senior divisions, and remained a director until 2002 when his daughter Sam Smith took over the role.

In 2014, Phil had a heart attack while surfing and made it to shore in time to get medical attention.

It doesn’t seem to have slowed him down much.

Today, he is working with lifesaving bodies and the National Parks and Wildlife Service to have defibrillators installed in strategic places along surfing beaches, to make activities safer for all beachgoers, especially older ones.

He is also involved in a surfing educational program in schools which, among other things, helps promote water safety and good etiquette for board riders.

Overcrowding is the major problem in surfing today and, Phil said, leads to bad surfing manners.

“I still love to catch a wave,” Phil said.

“If that feeling ever stops it will be time to give up.”

Surfing takes judgement, fitness, agility and courage — all attributes that help make for success in the corporate world and many of the young surfers of yesteryear went on, like Phil, to lead useful and profitable lives.

For some, surfing remained the “pure” life and conventional consumerism and comfort was sacrificed for the endless search for the perfect wave.

Benny, 74, is one of those to whom it has always been a pastime, rather than a sport.

He hasn’t been in a competition since 1972 and said: “You can do it for the prize money and the glory or just try and find a good wave on a quiet morning.”

He owns little but doesn’t care.

“When I was young we had to say we were lion tamers or glass blowers so we could get the dole without having to look for a job,” he said.

“Then I had to turn my hand to any old odd job just to earn enough to keep surfing. These days the government pays me a pension to do it, how good is that.”

Benny lives in a rented fibro flat, runs a rusting old car and surfs every day he can.

Most older surfers today, though, are like the Wednesday Warriors who started surfing in that carefree yesteryear when Little Patti was singing about her stompy, wompy surfer boy, then put it on the back burner while they built careers and families.

They get together regularly to compete in the 65 or 70-and-over divisions at surf festivals or just go riding together for the joy of it.

I met with five of these cheerful blokes – Barry Davies, Trev Garbett, Tony Stewart, Terry Halloran and Chris Heavener – in a café at Caloundra.

Two of them are locals, the other three from Brisbane.

They explained how the group consists of retired members of the all-age Brisbane Boardriders, established in 2004, whose activities include one full week a year of surfing at Caloundra and another at Noosa.

They have surfed together for so long they can easily recognise each other’s style.

It’s more fun, they say, than surfing alone and one of the compensations of age is not having great expectations of the surf but just taking it as it comes.

“You never really stop being a surfer,” Trev said.

“You remain a mind surfer, always looking at a wave and working out how you’d approach it.”

It’s this mindset that helps former surfers get back into it at an older age, though all agree it’s still possible for people over, say, 50 to take up surfing for the first time provided they are reasonably fit.

After all, Caloundra legends Pa and Ma Bendall didn’t start surfing until they were in their early 50s more than 60 years ago when, as one of the Wanderers pointed out, you learned surfing manners from older blokes who commanded respect.

Like Phil Jarratt, they don’t see surfing so much as exercise but rather, exercise to keep surf fit and this includes walking, cycling, swimming, paddle boarding and special stretching exercises to maintain and increase core strength.

You have to read the water, the currents and find a rip to take you out there with the least effort, then position yourself for the best take-off.

Not for nothing is a 60-plus surfer featured on the brochure for a leading bowel screening service.

Competitions today are more diverse than they were, offering opportunities for older surfers to test their lifetime board skills against others of the same age.

The Noosa Wrecks and Relics, for example, is a two-day over 50s longboard event for men and women, hosted by the Noosa Malibu Club.

It is a celebration of bygone surfing days as well as a contest.

Today’s over 60s surfers have seen many changes: different board designs and surfing styles, more female board riders, the advent of surf rage as even the once-remote spots known only to the most adventurous surfers, become well-known.

The popularity of big wave surfing, made more accessible by jet ski-towing, has increased spectator interest.

And though Phil maintains that the culture hasn’t changed that much and surfing music is constantly renewing itself, others disagree.

Benny, for instance, is glad he isn’t young today.

“It was so bloody good back then in the 60s,” he said wistfully.

“The beaches were so empty you rarely had to fight for a wave.

“The little milk bars kept us fed for peanuts; no over-priced lattes and stuff then.

“Parking was easy. The beach parties were legend and we had that instantly recognisable surf rock music.

“We lived and talked surfing. We even looked like surfers; our cars were beat-up old surfer cars. It’s not like that today.”

Maybe not, but the Wednesday Wanderers and others like them don’t depend on their memories to enjoy the surfing life.

They’ll keep trekking up and down the coast in search of good waves.

For them, life is still an endless summer.