Unusual ocean ‘dragons’ wash up on our beaches

Unusual ocean ‘dragons’ wash up on our beaches 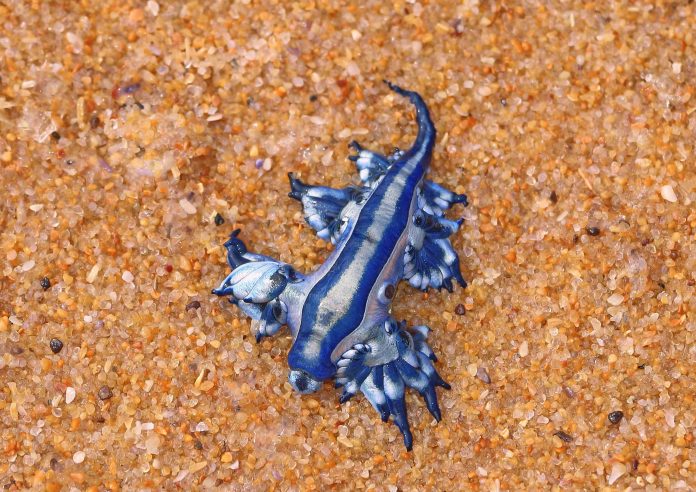 A leading Sunshine Coast ecologist has revealed why some amazing creatures have recently appeared on our shoreline — and they may become more common in the future.

Elegant and striking ‘Blue Dragons’ have recently washed up and been spotted by curious beachgoers.

The tiny sea animals are a special type of nudibranch, which are marine molluscs.

Professor David Schoeman, of the University of the Sunshine Coast, said they were more obvious in recent weeks because of onshore winds.

“If you look in rock pools, you can see these striking sea slugs. They’re fairly flat, often ribbon shaped and can have really bright colours,” he said.

“The reason we’re seeing them now is because we’ve had several weeks of onshore breezes.

“The wind has been blowing consistently and jellyfish and bluebottles have blown in from the open ocean.

“These guys (Blue Dragons) are suffering the same consequences.

“The wind is blowing them, slowly but surely, from the open ocean on to our beaches.

“The waves then drag them in and as the tide drops, they get left behind.”

Blue Dragons can be found around the world but we can’t estimate how many there are.

Professor Shoeman said we would likely see more of them here because onshore winds are associated with the La Nina phase.

“And with climate change, we’re expected to see strong La Nina, when the warm water is on our side of the Pacific and we get onshore winds,” he said.

“As long as the La Ninas get more intense and we get wetter summers and onshore winds, we’ll get more of these critters on the beaches.”

Blue Dragons, scientifically known as Glaucus atlanticus, thrive on the surface of the ocean.

“They do this by swallowing an air bubble, which makes them buoyant, and they can float along,” Professor Schoeman said.

The creatures, which are shorter than 3cm in length, share traits to bluebottles.

“Bluebottles are actually their prey, and they are fairly voracious predators, so they live in the same environment as bluebottles,” he said.

“They also have similar colours, to act as camouflage from birds.

“It’s difficult to see them on the surface of the ocean.”

They are also camouflaged beneath the surface.

“They have very light colours on their underside, almost white, so when they are viewed from below, they are also hard to see,” Professor Schoeman said.

“This counter-shading is something that’s also used in security systems, like Air Force One, which is difficult to spot against the sky.”

“They can incorporate the stinging cells from bluebottles in their own tissue,” Professor Schoeman said.

“In a sense they are a chimera. They can take cells … and incorporate them into their own tissues and use this for defence.”

“They can but they normally don’t,” Professor Schoeman said.

“The sting would be no worse than a bluebottle because that’s exactly the bluebottle (sting) that’s being used.

“People should be careful when handling them.”

The waters around Mudjimba Island have proved popular for divers to see Nudibranchs.

Professor Schoeman wasn’t completely sure why so many of the creatures were there.

“It may be that the island has a (breeding) habitat for them, so we could be seeing a hatching population or a population aggregating there to breed, but that’s speculation,” he said

Professor Schoeman said he’s yet to see a Blue Dragon in the flesh but he’s eager to.

“I really like these little critters. I’ve never seen one face-to-face so I’m going to go out and see if I can find some to play with.”