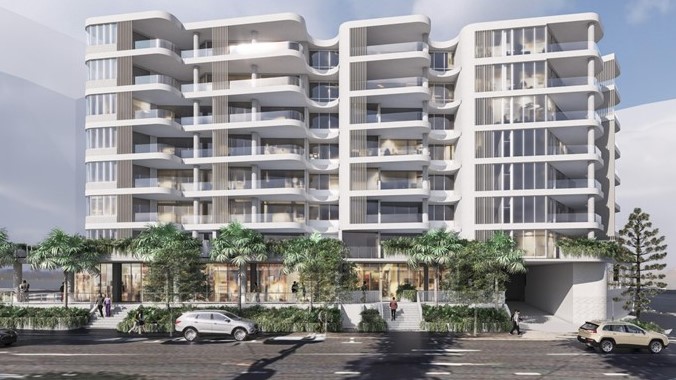 Another ambitious luxury development in Caloundra is helping herald a new era for Queensland’s “most undervalued beach town” that has suddenly become hot property.

Developers are spruiking the ‘renaissance’ of the popular family destination, which will soon welcome a series of upmarket apartment towers unlike anything in the area.

The latest project to be revealed is BIANCO Caloundra, a new residential complex on the corner of Bulcock Street and Tay Avenue, which will boast one of the region’s most spectacular views over Pumicestone Passage.

This follows the announcement of a $250 million hotel and apartments development, Paloma Paloma at the old post office site, which has been touted as “unlike anything before on the Sunshine Coast” that will “set a new benchmark”.

It also comes hot on the heels of Coast developer Henzell Property Group acquiring the nearby Caloundra Suncourt Motel, on a 6175 sqm site at 135 Bulcock Street, that is set to become modern apartments for owner-occupiers, with retail and dining at street level.

However, the pace of development has not pleased everyone, with many long-time locals lamenting the loss of well-known buildings and unhappy at rapid changes to the quiet and affordable lifestyle.

Caloundra Chamber of Commerce president Michael Shadforth said Caloundra was “the most undervalued beach suburb in Queensland” and its main street was set to be “the James Street of the Sunshine Coast”.

Mr Shadforth said locals were well aware of the “cool vibe” and “generational change” that had been sweeping the sleepy town for the past three years.

“Bulcock St is the James St of the Sunshine Coast,” he said, referring to the funky and creative “Eat Street” that now draws people back to Brisbane’s Fortitude Valley.

“Most people will be very surprised – if they haven’t visited Caloundra in two years – how it’s changed.”

Mr Shadforth said the town and other parts of the southern end of the Sunshine Coast (including the Birtinya hospital precinct, Bokarina Beach and Aura) were enjoying “the most predominant growth on the Sunshine Coast”.

That was creating more interest in the area, leading to a “massive demographic shift in age groups” towards younger residents.

“What they’ve done is built this really cool culture that’s now attracting more and more younger people to the Caloundra area. So there’s jobs and a cool vibe,” he said.

“These developers have come along and realised: ‘If I build high-quality product, I’ll sell it’.

“You can see that higher level of design. Those developers have got in at the perfect time.

“They’re all designing stuff that’s way better than previously designed there. The specs are amazing.”

Belle Property principal and owner John Stamp, who is marketing BIANCO Caloundra, predicted it was the start of big things to come for the town.

“It‘s really important that these sort of ambitious products are being delivered at the southern end of the Sunshine Coast,” Mr Stamp said on the phone from Tasmania.

“It really is the gateway into the most beautiful part of the world and it is an easy-to-reach area from Queensland’s capital city.

“From 2022 on, I think we’re going to see a quite spectacular renaissance of Caloundra.

“Most definitely that is going to be centred and glowing brightest in that Bulcock Street area.”

The two, three and four-bedroom apartments will have access to a private pool, gym, spa and sauna onsite.

The project is designed by renowned architects Cottee Parker and will be developed by Coast-based RCQ Projects.

“The opportunity to secure these properties today will be seen in five to 10 years’ time as quite a lucky situation for those 33 people who actually manage to get their name on a title,” Mr Stamp said.

While details were still being finalised on the development, he said owner-occupiers “definitely will have access to apartments under $1 million”.

Mr Stamp said BIANCO Caloundra’s position alone was unique: “It is beautiful. That unique way that Tay Ave winds back on an angle gives us an expanded view.”

He said the southern end of Bulcock Street was already transitioning, with restaurants and cafes upgrading and expanding, and BIANCO Caloundra offered the ideal opportunity to downsize to apartment living in a special part of the Coast.

The southern end of Bulcock Street was quiet yet close to all amenities, with easy access to Bulcock Beach for patrolled swimming and fishing, as well as kayaking and boating in the unique waterway of the Passage, lying between Caloundra and Bribie Island.

“You’ve got everything at your fingertips. It’s just a really beautiful spot.”

Privately owned, award-winning builder RCQ is also the name behind such projects as Reflection Cove (the fourth and signature stage of the Emporio masterplan in Maroochydore), Plaza Central (a unique residential development just steps from Sunshine Plaza shopping centre in Maroochydore) and One The Esplanade apartment building in Cotton Tree.

Operating since 1987, RCQ has received more than 50 Master Builder Awards including five Queensland State Awards, and numerous regional accolades as well as being a significant contributor to the Maroochydore skyline. Its development footprint ranges from Brisbane to North Queensland, after opening the RCQ Townsville office in 2007.

Mr Stamp said RCQ was a “very considered and sensible” developer that Belle Property – part of a network of more than over 140 offices operating across New South Wales, Victoria, Queensland, South Australia and the Australian Capital Territory – was proud to be associated with.

“Belle Property really don’t lend our name to many builders and developers on their products,” he said.

“We tend to hold our brand in quite high esteem so we will only work with products that we think are quite special.”