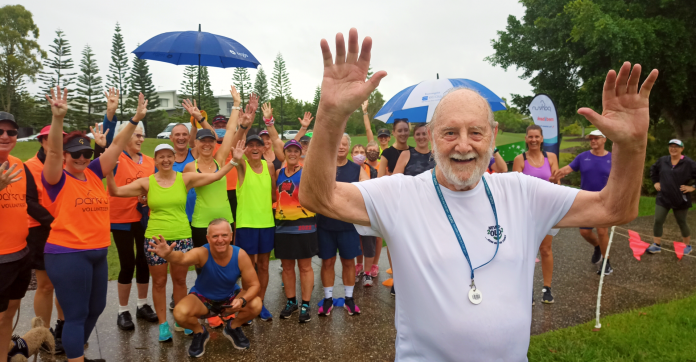 John Taylor has overcome three heart attacks and bypass surgery to become the oldest person in Australia to achieve a running milestone that requires years and years of commitment.

The 88-year-old just completed his 400th parkrun which is a free 5km community event held every Saturday morning in parks and public spaces around the world.

Runners and walkers cheered as the Mooloolaba grandfather crossed the finish line at Brightwater parkrun at the weekend to set an Australian record.

However Mr Taylor points out it’s a title he may only hold for the next 16 weeks when he’s expected to be overtaken by a man in his 90s from Cleveland who’s also due to pass four centuries.

To achieve 400 parkruns, Mr Taylor would have had to run or walk parkrun religiously every Saturday for nearly eight years straight, totalling some 2000km.

And that’s pretty much what he did, only missing a few mornings when he was extremely ill or the weather was thoroughly uninviting.

He has also volunteered 36 times (the free community events are able to held every week thanks to the commitment of volunteers).

Mr Taylor started taking part in 2012 when the Sunshine Coast’s first parkrun formed at Kawana, with a circuit from the surf club to Point Cartwright and back.

(There are now nine on the Coast including Mudjimba, Nambour, Glass House Mountains, the Baringa Sports Ground at Aura and Noosa.).

Mr Taylor said parkrun was one of two activities he could fit into his week at his age “that makes you feel like you’re functioning okay”.

“I do choir on Mondays and parkrun on Saturdays,” he said.

Although he was a more prolific runner in his younger decades, these days Mr Taylor says he’s dealing with various health issues and for now prefers to walk.

There was a time when he was waking up early every day to run 12-16km, and there was another era when he stopped altogether.

But after suffering three heart attacks and undergoing heart bypass surgery, he rediscovered the sport and has been putting one foot in front of the other ever since.

“(After my third heart attack in my 70s) I started doing a lot of walking and then increasing that, and then added running as I wanted to leave the heart incidents behind me,” he said.

“(Now) I don’t want to stop. I’ve always thought about retiring as a strange thing.”

Part of the cult of parkrun is not only trying to beat your personal record of how fast you can run 5km each week, but attending as many events as possible.

Milestones that are celebrated include the 50 club, which takes at least one year of solid attendance, and the 100, 250 and 500 clubs.

Although 400 isn’t an official milestone, it’s still considered a notable achievement with only a small number having ticked it off in Australia.