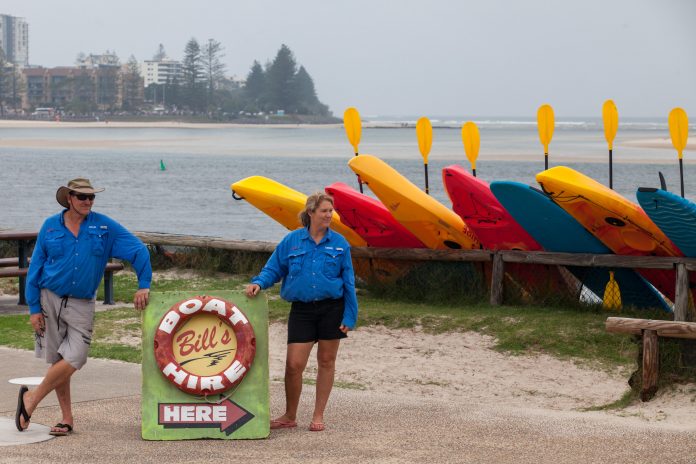 A boat hire business that dates back 65 years has been forced to close in the wake of the Bribie Island breakthrough, which the Coast Guard says has created “a dangerous, pulling vortex”.

Coast Guard Caloundra has issued a warning to boaties after the dramatic tidal breakthrough at the northern end of Bribie Island.

The event has created concern among locals, with community groups calling for a roundtable with government and scientists.

Mr Pearce said the channel was powerful, particularly on the outgoing tide.

“It’s creating a major pulling vortex, which is quite dangerous,” he said.

The Coast Guard has already been called to an emergency after reports a 3m boat with two people aboard was getting sucked through the new bar. With the aid of local boaties, it was towed to safety.

Kerrie and Craig Chandler, owners of Bill’s Boat and Bike Hire, which has been operating since 1956, said the conditions were too dangerous for them to hire out their motorboats.

“There’s an inherent risk in sending novice boaties out there.

“So, we’ve had to cancel our hires and we’re losing money in our peak season.”

Kerrie said they had been hurt by the impacts of Covid, and the breakthrough had delivered a “devastating” blow.

“It’s created a lot of debris in the water … so we’ve had to close and now it’s wait and see,” she said.

However, there is “light at the end of the tunnel” and the captivating environmental change may give the business a surprise gift.

“We’re now looking to pivot and do guided tours to the breakthrough,” Kerrie said.

She said she hoped the passage would be clear for the next holiday season at Easter.

“That’s what we’re working towards. It could take months for it to settle.”

Kerrie said they will need to alter their operations, after markers were moved.

“That will change our safety management system and our maps and charts.”

“We’ll get on our feet again and provide locals and visitors with opportunities to explore this magnificent and unique waterway.”

Mr Pearce said those who used the passage would need to take extra care in coming months.

“A substantial section of the island has disappeared, and the debris (including trees) is now in the water,” he said.

“All of the sand that’s eroded from the island is now sitting in the passage.

“That means people will have to be extremely careful until they know where all the sand bars are.”

The area will be scoured during coming weeks, largely with the use of drones, to locate the bars.

Maritime Safety Queensland has been called into action to shift one of the navigation markers that was dragged way off course.

“It became very dangerous with boaties seeing the green marker … in the wrong place. It could have dragged people out to sea,” Mr Pearce said.

“In the next month or two, they will do a full survey and relocate many of the beacons.”

Help keep independent and fair Sunshine Coast news and opinion coming by subscribing to our free daily news feed. All it requires is your name and email. See SUBSCRIBE at the top of this article .