Bright statement: mystery and buzz as $250m project makes a splash at the top of town 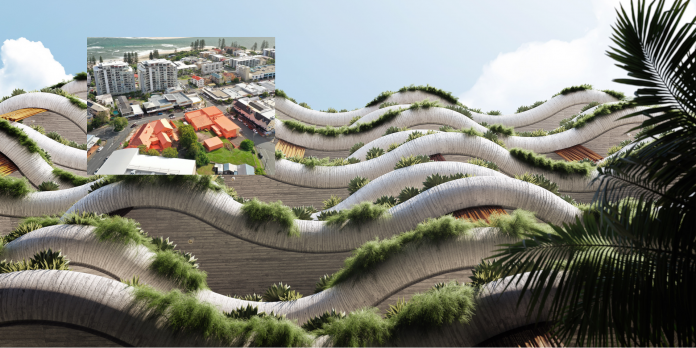 The mystery of an entire block of buildings freshly painted in bright orange at the top of Caloundra’s main street has been solved.

The startling colour scheme on Bulcock Street has been stopping people in their tracks and sparking conversation and debate.

Sunshine Coast News can reveal that it is in fact a marketing tactic to herald a $250 million “world-class” hotel and apartments development called Paloma Paloma.

The upmarket project is touted as being “unlike anything before on the Sunshine Coast” and will “set a new benchmark”.

It will encompass several adjoining buildings, including one that formerly housed the old Caloundra post office (pictured below). 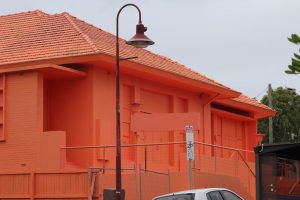 The entire site was recently painted in what its creators describe as a shade of “pink fire”, but others might call it orange, tangerine or salmon.

The flamboyant move was apparently designed to ignite interest and intrigue in the upcoming boutique hotel and 84-apartment complex (including four penthouses).

The site will then be demolished before the Paloma Paloma project breaks ground in mid-2022 and is expected to take three to four years to complete.

The project website, which has begun taking registrations of interest, says it will “invigorate and re-define the top of Bulcock Street”.

Caloundra has long been considered the more affordable alternative to other beach destinations on the Coast, with a laidback and family friendly vibe.

However, the developer says this luxurious new project will set “new benchmarks across hotel, hospitality and residential resort living” in the region.

“Our site has been a place of contention and speculation for years,” says the Paloma Paloma website.

“Now…we have brought a fresh and generous perspective to healing the land, to creating a brilliant and intriguing new energy, and to shaping this place’s future as a new benchmark of excellence.”

The corner block on the northern side of the street previously housed the Caloundra Post Office, but in later years was a restaurant and, most recently, a gym.

The neighbouring shops include the Caloundra Book Exchange, a barber, surf shop and masseuse.

The developer, understood to be Melbourne based, has not yet been publicly named, but the project has brought together architecture firm deciBel, town planners Project Urban, advisory firm Axsia and real estate agents Colliers.

Decibel Architecture’s Dylan Brady said Paloma Paloma would be “the best residential and lifestyle offering on the market — the pinnacle of brilliant international design, exceptionally curated experiences and the best in Australian hospitality”.

He said the curved and flowing architecture was inspired by Caloundra’s rocky headlands, the tidal ledges and weathered stones and dunes.

Inside would be a selection of “individually crafted sky homes with personal balcony pools”.

The complex would also include two, three and four-bedroom dwellings, “each of which is the best room in the house”.

“Paloma Paloma is woven from unexpected delights. From the outdoor bathing gardens through to the brilliant sky home kitchens filled with life, Paloma Paloma is built from careful attention to moments that bring joy every day,” said the press release.

“Presenting a collection of curated materials, unique fixtures and fittings crafted for the Paloma lifestyle: a collage of raw and robust white concrete paired with the finest of linens and layers, cool solids, warm textures and designer fabrics.”

However, some locals have expressed their shock at the marketing ploy which they described as an “eyesore” and questioned why the developer was allowed to bathe the site in paint.

Long-time locals on the Caloundra the Good Old’ Days Facebook page shared memories of the days of the old post office as they expressed sadness at the impending progress.

“Many will never understand the memories of some places that we, who have lived here longer, are losing. I’m happy to embrace change but please leave some of the old Caloundra behind for us,” wrote one Caloundra resident.

Said another: “Not a good start to a marketing campaign to create such an horrific eyesore in our town, even if it’s only for a few months.”