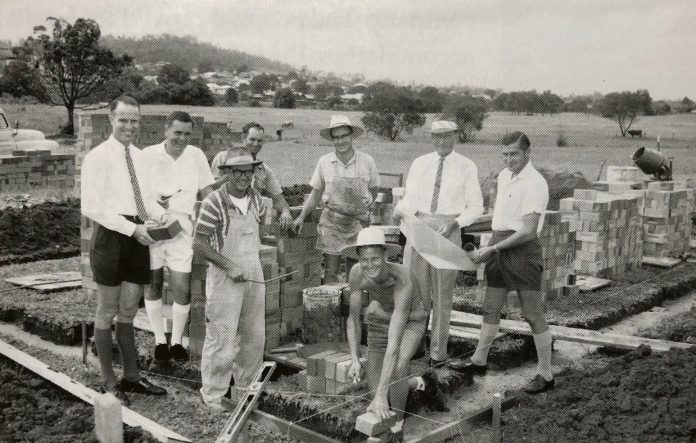 Retirement homes and villages are now a flourishing business on the Sunshine Coast, but until 1960, aged care facilities were unknown. It took some innovative fundraising to get the first community off the ground.

The first move towards aged care on the Sunshine Coast came from a group of Nambour businessmen and an active and ambitious Apex Club.

Apexian and Nambour Chronicle editor Peter Richardson, wrote of “an aged care facility that would end the need for frail aged residents of Nambour and district to leave their familiar surroundings and move to Brisbane and elsewhere when in need of residential care”.

The “Sundale project” officially got off the ground at a meeting on May 27, 1960, “for the purpose of considering the establishment of a Senior Citizens’ Centre in the Nambour area”.

Grimes, the chairman, pointed out that raising the necessary funds was one aspect and “the continued operation of the undertaking another, which must receive the attention of those interested to ensure the successful operation of the scheme in perpetuity”.

The meeting discussed the types of units to be built and the ongoing method of operation.

Grimes and his associates Charlton and Renouf, were keen to give something back to the community where they had built their success and between them, they put up the money that allowed the debt-free purchase of the site in Doolan St, Nambour.

Local pharmacist Ian Hayne (who later built the Fairytale Castle at Bli Bli) had youthful enthusiasm and a vision; Parry donated his time and considerable skills to the design and construction of a “new look aged people’s village with a minimum of financial backing”; and Richardson mustered support for the project through the pages of his newspaper.

There is a another name associated with the success of Sundale, and that’s Ernie Stollznow, who after selling his cane farm, was prepared to work part-time at Sundale as a part-time janitor before becoming its administrator in 1977.

A survey was carried out which confirmed the need and public support for the project and the Apex Club of Nambour set out on one of the most ambitious projects ever undertaken by a service club.

Fundraising remained the big challenge and the Apexians came up with a novel and unprecedented idea that won the imagination of the people in 1962.

The seeds were sown by young Chronicle printer Wilf Briggs who, in November 1961, perched on a small platform in the middle of Nambour for 24 hours to draw attention to the project. 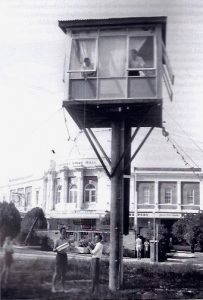 Stollznow wrote: “They virtually took to the air and their unique idea of erecting a room on top of a pole proved a winner” at the Pole Sit-In of 1962.

SEQEB provided and erected a sturdy pole which supported a small 9ft sq (2.73sq m) room 6m above the ground at Station Square near the Nambour Civic Hall.  Local businesses chipped in with construction and plumbing and Telecom installed two telephones.

Its four window walls were later used in stage one of Nicklin Lodge.

“When all was ready, like Noah entering the ark, Ian Hayne and Tommy Carter armed with telephone directories entered the room at 8am on a Saturday morning in February 1962, and came down exactly seven days later,” wrote Stollznow.

“There had been 21 meals hoisted up in a basket, each prepared by a different cook. Cold drinks, fruit and cold oysters were provided in lavish quantities. Only midnight revellers provide to be spoil sports. They rocked the stay wires of the pole and the resultant rattle and vibrations in the room caused the pair to first think there was an early cyclone.”

During the week, Hayne and Carter phoned 5000 people seeking donations and reported there had been “not one sour note or rebuff”.  The Sundale Appeal was $13,440 richer.

The first building of the Sundale project, Nicklin Lodge, was opened by Premier Sir Francis Nicklin on November 30, 1963. There were three cottages, 20 hostel units, a dining area, kitchen and a supervisor’s flat.

More than half a century later, Sundale has become a key player in the retirement business on the Sunshine Coast.

The last word belongs with Richardson, who wrote “Today, Sundale stands as proof that when young citizens of goodwill ‘make the ideal of service the basis of all worthy enterprise’ great and good things happen.”