'A place to do business': Coast gets more global recognition with cable landing station sale 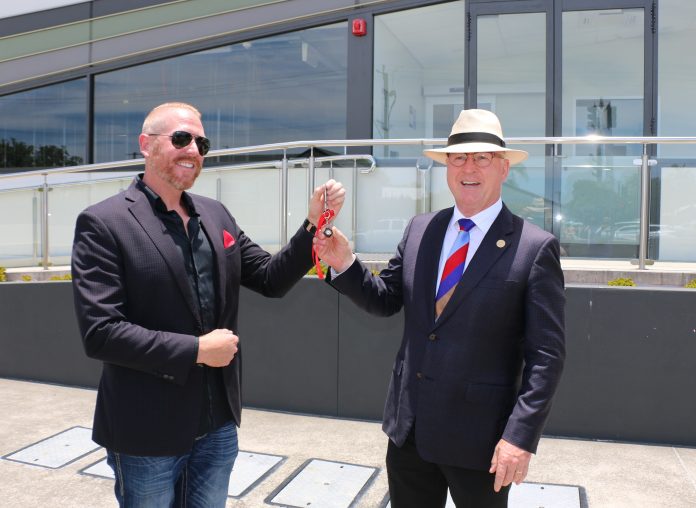 A globally-respected data centre operator has been handed the keys to the International Broadband Submarine Cable landing station at Maroochydore.

ASX-listed NEXTDC has purchased the station from council and will own and operate it, with an $8 million deal set to create jobs and stimulate more investment in the region.

In layman’s terms, the facility brings “the cloud” closer to Sunshine Coast companies. It is the only site of its type outside of a major capital in Australia and is expected to attract interest from major corporations.

“Data centres are becoming an essential part of the business, economic and social landscape and a core element of the digital architecture that underpins connectivity, accessibility, security and information storage,” Mayor Jamieson said.

“They house and manage computer infrastructure for large and small businesses, which rent space and provide high-capacity, high-speed connectivity.

“NEXTDC’s global linkages will deliver the Sunshine Coast unprecedented expertise and significant quality assurance for their customers who store their data at the data centre.

“Leveraging off NEXTDC’s expertise in this field will give Council the ability to attract new businesses which would not ordinarily be found in a regional city.

“More jobs and a wider range of occupations, particularly in IT, will be created.

“For a data centre operator, the likes of NEXTDC, to establish a presence on the Sunshine Coast — outside of a capital city — demonstrates confidence in our region.”

Sunshine Coast Tech Industry Alliance inaugural chair and ENTAG Group CEO Kris Carver described the sale as another critical piece of the puzzle, taking the region further towards national and international recognition as a place to do business.

“The NEXTDC data centre maximises the investment in the submarine cable and is another foundational brick for organisations on the Sunshine Coast to compete nationally and internationally,” Mr Carver said.

“It provides further support for the tech industry and joins other game-changing projects — from advanced manufacturing through to the Sunshine Coast Airport FAN announcement.

“When you place all those pieces together, you attract other business and help those large, tech-savvy organisations already here, such as the insurance industry, grow.

“We now have a data centre and a direct link from the Sunshine Coast, which increases speed and reduces latency and that really sets us up, especially in the area of gaming and e-sports, one of the fastest growing industries in the world.”

“The acquisition of SC1 and the Sunshine Coast International Broadband Network Cable Landing Station leverages several years of research into the growth of edge computing and the current and future requirements of digitally enabled regional communities.”

Mayor Jamieson said the cable landing station was not core local government infrastructure and it had always been a council ambition to use it to attract a major data centre operator to the Sunshine Coast.

“Building the cable landing station was a first for an Australian local government and this deal once again shows this council’s future focus and ability to continually deliver innovative solutions for our community,” he said.

The cable, which is laid on or buried under the sea floor, connects to the station adjacent to the new Maroochydore City Centre project.

The cable project includes the installation of a 550km undersea fibre optic cable which connects the Sunshine Coast to the 7000km Japan-Guam-Australia (JGA) submarine cable.

The cable network has provided our region, and beyond, extraordinary capacity to accommodate fast, reliable transfer of data across the world and Queensland’s first direct connection to global markets.