Man infectious on the Coast for five days as border opens

Man infectious on the Coast for five days as border opens

Sunshine Coast tourism operators and accommodation providers have been been given an early Christmas present with the Queensland borders opening up four days earlier than expected.

Border restrictions have been eased with the state at 80 per cent double dose COVID-19 vaccination, and thousands of people from interstate are flowing in by air and car.

A massive police operation is underway at the Queensland-NSW border on the Gold Coast where hundreds of vehicles have been waiting to get across.

It comes as Queensland recorded one new community acquired case — a man on the Sunshine Coast who was infectious in the community for five days between December 8 and 12.

A public health alert has been issued for new exposure sites in Eumundi and Coolum Beach and people are being urged to get tested and remain vigilant.

The exposure sites are:

“Now more than ever, it is essential to get vaccinated and to continue to use the Check In Qld app at every location you visit,” warned the public alert.

The state’s new chief health officer Dr John Gerrard said moving forward there would be less focus on individual infections and more on broader trends and exponential cases in the community.

Meanwhile a huge flight sale also has been launched by Virgin Australia, with fares available between the Sunshine Coast and Sydney for $65. Scroll down for more details.

Tourism businesses are expecting their best summer season since the pandemic began after losing about $20 billion in revenue statewide since March 2020.

This is the first time in months that travellers from the southern states who meet Queensland Health requirements will be able to enter the state without being subject to hotel or home quarantine restrictions.

Emotions are likely to run high at Sunshine Coast Airport, as friends and families reunite — the first time in many months for some.

A Sunshine Coast Airport spokesperson confirmed all Jetstar, Qantas and Virgin Australia flights from Sydney and Melbourne on Monday were fully booked, and this equated to about 1100 seats.

This is on top of the services already running to Cairns and Emerald with Alliance Airlines operating on the day.

With flights into Maroochy having a seat capacity of more than 1000 a day and with airlines expected to ramp up schedules, businesses reliant on tourism are likely to have a much merrier festive season than at first thought.

As a celebration of the easing of restrictions on travel, the passengers inside the arrivals hall would be receiving gift bags showcasing Sunshine Coast and Noosa products and experiences to enjoy in the lead-up to the holiday season, the spokesperson said.

The border reopening will bring a new era for Queensland.

For the first time in 229 days people won’t need to quarantine on arrival, as long as they’re fully vaccinated and test negative.

Premier Annastacia Palaszczuk said with more than 80 per cent of residents having had two jabs, it was safe to move on and reunite families and friends. 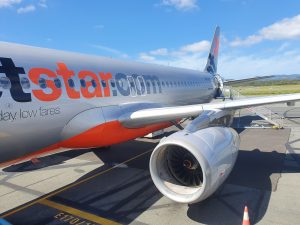 “We will live with COVID but on our terms.”

Queensland Tourism Industry Council chief executive Daniel Gschwind has witnessed a surge in bookings since the reopening date was set.

“We have a lot of ground to make up. Tourism is a perishable good, you can’t store it then sell it later,” he says.

“But we’re certainly hoping we’ll have a strong harvest for this summer season.”

While authorities have concerns over community transmission of the virus in the last week, police are confident their operations and border patrols are sufficient to deal with an influx of travellers.

“The current situation for COVID on the Gold Coast is one that we’ve been preparing for, for two years,” District Acting Chief Superintendent Rhys Wildman said.

“We are prepared and we are ready to deal with this and keep our community safe as we’ve done over the last nearly two years.”

Queensland Police will keep the same operations at five checkpoints on the NSW border, doing 100 per cent of compliance and border pass checks in quieter periods on the roads.

To coincide with the Queensland border re-opening today, Virgin Australia has launched a jaw-dropping sale on over a million seats from as low as $59 one-way in time for the summer holidays. 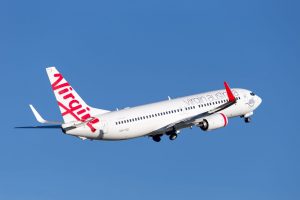 Virgin Australia’s ‘Queensland is Good to Go’ sale has begun and will run until midnight Friday, 17 December, or until sold out.

In one of the largest state-wide sales offered by Virgin Australia, travellers can enjoy discounted airfares to destinations such as Brisbane, Cairns, Gold Coast, Hamilton Island, Sunshine Coast and Townsville.

The ‘Queensland is Good to Go’ sale fares can be booked at virginaustralia.com.