‘Intelligence and Tourist Bureau’ advice from 1923

‘Intelligence and Tourist Bureau’ advice from 1923

'Memories will cling': what the 'Intelligence and Tourist Bureau' advised holidaymakers in 1923 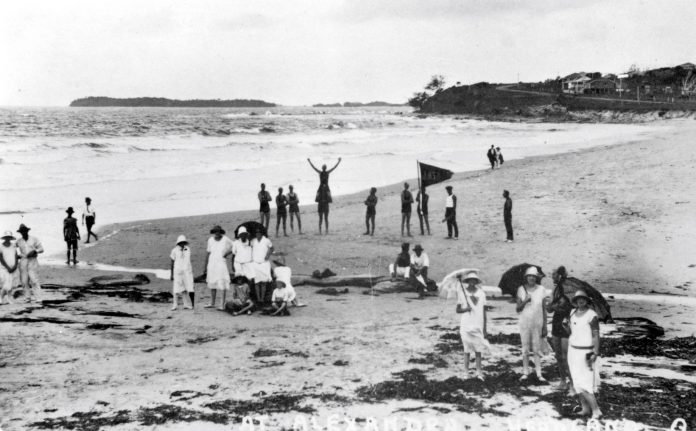 As thousands of holidaymakers claim their patch of the Sunshine Coast for the summer holidays, let’s take a trip back almost a century to 1923.

Rather than the Bruce Highway – which was more track than highway – becoming one long parking lot, holiday hordes arrived by train.

Local roads were dirt or sand tracks and access to the beach settlements meant coordinating rail, horse and cart, bus, car, motorboat and even steamer.

But this didn’t stop the Queensland Government Intelligence and Tourist Bureau waxing lyrical in its “tourist guide affording concise information and direction where brief of extended holidays may be spent” in 1923.

Covering “mountain and seaside resorts from Noosa to the Tweed”, the picture it paints of the North Coast is in stark contrast to the Sunshine Coast we know today.

For a start, the hinterland towns – Glass House Mountains, Cooroy, Tewantin, Nambour (“the Metropolis of the North Coast District”), Mapleton, Buderim, Palmwoods, Montville, Landsborough and even Bald Knob, took precedence over the beaches.

Riverfront locations were more popular, as swimming in the surf was still relatively new and somewhat risqué. There had been modesty concerns about swimming in the ocean, which was banned during daylight hours until 1900.

Mooloolaba, which this year celebrates a century since being re-named from Mooloolah Heads, failed to make a mention in 1923, although there were local reports that “in the 1923 New Year, campers were making the most of the Mooloolaba facilities, and enjoyed favourable weather and good fishing.”

A year later, Brisbane’s Daily Mail reported it as being one of the best seaside resorts in Queensland, “with ideal positions for campers”.

The 1923 holiday suggestions start at in the north at Lake Cootharaba, where “once visited, its charming aspect will cling to memory, so magnificent is the scenery”.

Among the charms of Tewantin was that it was free from insect pests, no sand dunes or sandflies, no swamps or mosquitoes.

Passengers for Noosa Beach or boarding houses were easily landed from the motorboats.

“A short walk through a shady scrub of typical sea-shore character brings them to very comfortable quarters or the most charming of wave washed sands. The beach itself, washed by the clean brisk breakers of Laguna Bay, is an ideal spot for safe surf bathing.”

Coolum was listed as being a walk away: “Not far away is another beach, which has more thrilling acquaintance with gales, especially those which from the south-east. This beach, Coolum, may be reached by walking from Noosa Beach round boulder-strewn Noosa Heads if it is proposed to follow the sealine or it may interestingly be approached by a climb and descent of the wooded hills which hide it from view.”

Maroochydore was listed as having “an extensive beach, close to a tea-tree reserve which is famous as a camp colony in summer and holiday-time. Accommodation less picnic-like in character, also is provided at Maroochydore by an excellent hotel and boarding house; also by a system of furnished cottages.”

“Dressing rooms, sheds and a lifesaving reel” were also attractions.

“An almost constant charm of waters as they broaden out into a quiet lake-like sea at the mouth of a tidal river is the way in which they play a painter’s part by their reflection of the sky, by night and day. At Maroochydore such reflections make a fascinating study.”

At Alexandra Headland, “where many building sites have lately been sold with a view to the formation of a holiday town”, there is “no finer view of beach, river, bay and mountains”.

“Already some pretty red-roofed houses have been built and the soil quickly responds to the cultivation of picturesque garden plots.

“From the higher points of vantage some beautiful coastal scenes are noted – Point Cartwright and the entrance to the Mooloolah River forming a very fine picture indeed”.

While its renown for picturesque garden plots has long since disappeared, so too has the favoured access to Alexandra Headland. Situated between the Buderim tram terminus and Maroochydore it was “best reached by rail to Palmwoods, thence tram to Buderim and thence by conveyance to the Headland (arrangements to be made at Buderim).”

Intending visitors to Caloundra would leave the railway at Landsborough, the first refreshment station, 51 miles from Brisbane.  Here they were met by a mail motorcar and conveyed “through interesting palm scrub and forest country which continues for a considerable distance towards their destination.”

Caloundra could also be reached by steamer and motor launch via Bribie “through the scenic Pumice Stone Channel”.

The guide noted that “the area to which the designation North Coast more particularly applies is entered at Caboolture”.  A century later, that’s just where the 110kmh stretch of highway out of the city begins.