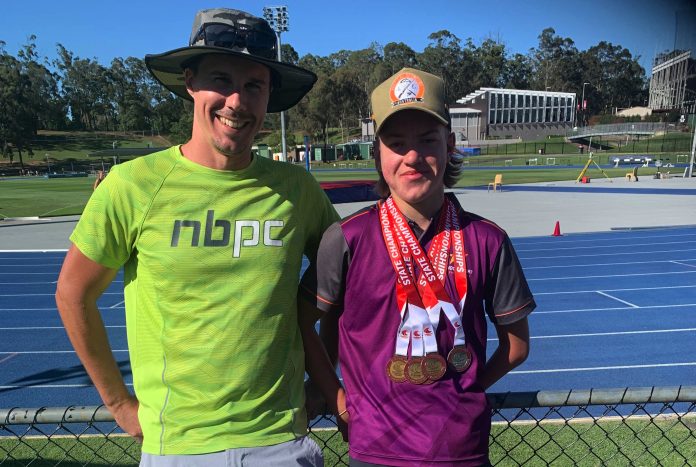 Ryan Engle’s mum knows he’s made of tough stuff — with a determined and spirited approach to life.

The 15-year-old almost died when he developed a serious infection and meningitis in 2019. But he’s bounced back in amazing fashion, even winning state titles in his return to track and field competition.

“If you think of the word ‘resilient’, you think of Ryan, because he’s built on resilience,” said mum Sallyann Stewart.

The obstacles arrived early for Ryan, who was born without a left hand.

That never stopped him.

“He came into this world with a different ability, but he’s just one of those young people who has overcome the odds,” Sallyann said.

“He’s one of those young people who wants to do everything.”

Ryan excelled at track and field from a young age, breaking national records and leading the Queensland team, as a multi-class athlete.

But he was confronted with the battle of his life two years ago, when he was diagnosed with invasive streptococcus, a sinusitis infection, which ultimately led to meningitis (inflammation of the brain).

He was put into an induced coma to try and stabilise his condition and there was uncertainty over whether he would live and, if he did, how he would function.

Family and friends stayed by his side and talked about motorbikes and fishing, and, after a week, he awoke.

“We’re lucky to have him here today,” Sallyann said.

He was paralysed down the right side, and a long rehabilitation followed, while he battled fatigue, headaches, infections and a leaking heart valve.

Ryan essentially learned how to walk again and was in and out of hospital, while Sallyann used her experience and expertise as a naturopath to help nurture and rehabilitate him.

He made steady progress in all aspects of his life, even returning to Maleny State High School for half days of work.

“Two-and-a-half-years down the track and we feel like we’re managing life and doing better,” Sallyann said.

A return to track and field training was a huge stride forward.

“When I could see he was managing his energy a bit better and we weren’t living in survival mode as much, I booked him with Nick Bennett’s performance squad,” Sallyann said.

Ryan worked with Nick on sprints and with Maleny’s ex-Paralympic thrower Panayiotis Negropontis on discus.

A session or two per week provided Ryan with some momentum and he capped his remarkable return by competing in a state meet this month.

“That was a huge deal, getting that lad back out there again,” Sallyann said.

Ryan won four gold medals at the Queensland All Schools Track and Field Championships at Brisbane, qualifying for the national championships next year.

“That was a big moment … it’s been a long process to get Ryano there,” Sallyann said.

“He was born with a different ability and has had to manage and manoeuvre his way through life.

“When he was a baby, the doctors said to never hold him back.

“We took that literally and have let Ryan have a go at everything.

“He’s very strong and determined and has got those fine qualities of an athlete, with mental endurance and focus.

“His goal is the Paralympics and he’s on that journey to get there … it’s onwards and upwards.”

Ryan relished his return to competition.

“Just to be back on the track, competing with all my mates.

“I love competing, it’s great, and you make so many friends.”

He said he wanted to take his athletics “as far as possible,” and he was feeling “much better and healthier” now, compared to the past year or two.

“I don’t get as tired and I’m more energetic. I just want to be out.”

He’s employed by Maleny Dairies, after asking for a role there.

Ryan has already done a variety of jobs on the farm, including driving the mulching tractor and milking the cows.

“When he hits the big time with his athletics, I know it (his story) will be a big one to draw (inspiration) from.”

“His journey to get there is massive.”