Judge backs luxury beachfront apartments at Buddina, but blinds will have to close 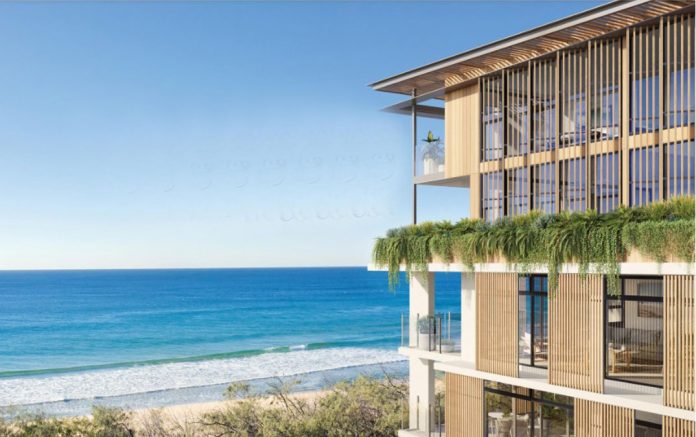 Residents have failed in their legal bid to stop a multimillion-dollar apartment complex going up on the beachfront at Buddina after a judge dismissed their case.

But the Friends of Buddina group is claiming a small victory that the luxury units overlooking the Pacific Ocean must contain automated blinds that close at 8pm to stop light affecting turtles during nesting season.

The controversial development, The Beachfront, is almost sold out and is one of the closest residential beach frontages on the coastline.

The 73-units, corner store, cafe and private pool sit behind the dunes on Buddina Beach and will be contained in three buildings on six lots of land that can “never be built out”.

The project by developer Robert Scott was approved by Sunshine Coast Council in April 2019 because it met the requirements of the Planning Scheme and was considered code assessible.

However, locals strongly objected to the complex going up in their neighbourhood and lodged an application in the Planning and Environment Court in November 2019, claiming the council had made “errors of law” in its approval.

The Friends of Buddina argued the council’s errors related to the potential impact on loggerhead turtles, the effect on the beach landscape and that the multi-storey housing might ruin other people’s views.

The group’s concerns specified the “environmental impacts to the adjacent Buddina Beach, which is a known turtle nesting beach …. from increased human disturbance, including light spill which may deter turtles or impact on turtle nesting”.

Friends of Buddina feared the units were not “located and designed to protect the character of the beachfront when viewed from the beach” nor did they integrate with the surrounding natural landscape and skyline vegetation.

They said the council had also failed to require that there was “no unreasonable loss of amenity for surrounding premises having regard to impacts upon views and vistas”.

However, in a decision published on Friday, Judge Long dismissed Friends of Buddina’s application and found in favour of Sunshine Coast Council and the developer.

Developer Rob Scott said he was pleased with the court decision which would enable construction to start in January/February 2022, with completion around August 2023.

“During the past 12 months we’ve been obtaining building approvals and finalising sales which is almost complete,” he said.

“The Sunshine Coast Community has been very supportive with residents making up the majority of our $80m in sales, with nine apartments remaining.

“We look forward to raising the bar in luxury apartment living on the Sunshine Coast.”

Friends of Buddina said it would consider its options after analysing the judgement.

“The proposed development remains an intensive high-density development beachside, within metres of the nesting habitat of endangered loggerhead turtles and on land located in the State declared erosion prone area; land which had previously been recommended for resumption,” said Friends of Buddina in a statement.

These included that “future unit owners could be penalised for not complying to conditions such as not over-riding the automated light controls that will ensure blinds are closed at 8pm during turtle nesting season”.

All windows and doors must also be tinted and the developer is required to complete surveys to monitor artificial light before and after the apartments are built.

“That’s the power of community action and standing up where council decision-making does not reflect community expectations and where that decision-making appears to preference developers, threatening our lifestyle and our amenity together with disregard for the protection the environment and its biodiversity,” the group said.