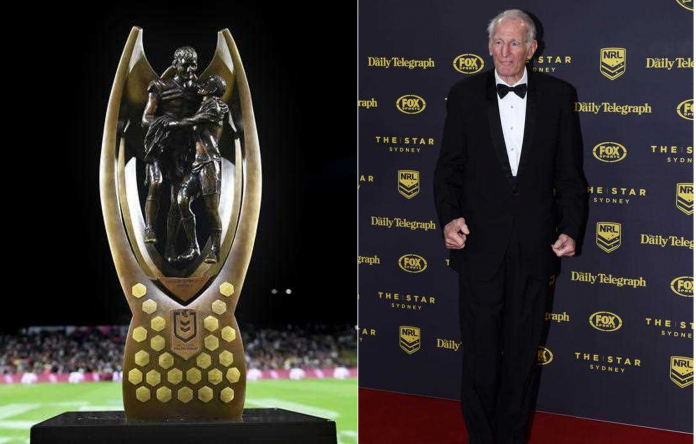 Norm Provan was the ultimate rugby league gladiator, in every sense of the word.

A rangy 193cm second-rower who won 10 premierships at St George, he was immortalised as one half of rugby league’s most iconic image.

Provan was living in a nursing home in Caloundra before his death, aged 89. He was the developer behind the Oasis Resort which he started building in the late 80s and sold in 2014.

For younger fans, Provan was one half of a comedic duo that appeared on Dally M night alongside his sidekick Arthur Summons from that memorable photo, and the NRL trophy.

As Provan claimed in one of the pair’s last public appearances together in 2016, it felt like he would “be around forever”.

For older fans an rugby league lovers, he was revered as one of the finest players ever.

After debuting for the Dragons in 1951, Provan scored 63 tries in 256 games for the club and represented Australia in 18 Tests and NSW on 20 occasions.

His perfect record in 10 deciders between 1956 and 1965, as part of the Dragons’ 11 straight, is matched only by teammate Brian Clay.

The last four of Provan’s titles came as captain-coach, confirming his status as one of the game’s greats.

Born in the Riverina and knocked back by Eastern Suburbs in 1949, Provan will forever remain the most capped player in St George’s history.

His career was noted as “the most remarkable of all” by historians David Middleton and Ian Heads, in the 2008 Centenary of Rugby League book.

“‘Sticks’, as he is known, is a giant of the St George story,” the pair wrote.

“The firm, fair leader of a legendary team, it is right and proper that a fine oil painting of his gazes down from a position of high prominence in Saints’ Leagues club.

“A timeless image of leadership and inspiration.”

Provan was made the game’s 13th Immortal in 2018, decades too late in the eyes of many given his towering status on the field.

“We’ve always looked up to dad. He’s always been immortal to us,” his daughter Sue McLeod said accepting his induction on his behalf.

“To have him receive this, especially now, means an awful lot to all of us – and to him.”

In reality though, Provan was immortalised into the fabric of the game 55 years earlier and in the moments after the 1963 grand final.

Sun-Herald photographer John O’Gready’s image of he and Arthur Summons bathed in mud remains the image that defines the game to this day.

Spotted by former Wallabies player and Winfield marketing man Gary Pearse in 1981, it was picked as the design to go on the Winfield Cup as part of the game’s rebranding the following year.

Provan, who had been involved in anti-tobacco campaigns, agreed, on the proviso he would not be associated with smoking and the trophy would not be linked to cigarettes.

“In many ways (the image) encapsulated the deep culture of the sport,” Pearse told AAP last year.

“It says a lot of things. It says resolution of conflict. It says big man, small man, it says rich clubs and poor clubs.

“But most of all, we had two blokes who were not only great players but great Australians.”

Summons died last year aged 84, but the league will ensure the pair’s legacy and story is known for generations to come.

“We have lost one of the genuine legends of our game,” ARL Commission chairman Peter V’landys said.

“Norm was revered for his leadership and his courage as a player – but also his incredibly humble, kind and genuine nature as a person.

“Sadly, the game has now lost both of our ‘gladiators’.

“But our Provan-Summons Trophy will live on as an acknowledgement of Norm and his good mate Arthur.

“They will be missed, but always remembered.”

Provan’s death on Wednesday night comes after a tragic year for the sport, following the deaths of fellow Immortal Bob Fulton and league legend Tommy Raudonikis.

“Norm was instrumental in St George’s great run of 11 premierships, a feat we will never see occur again.”