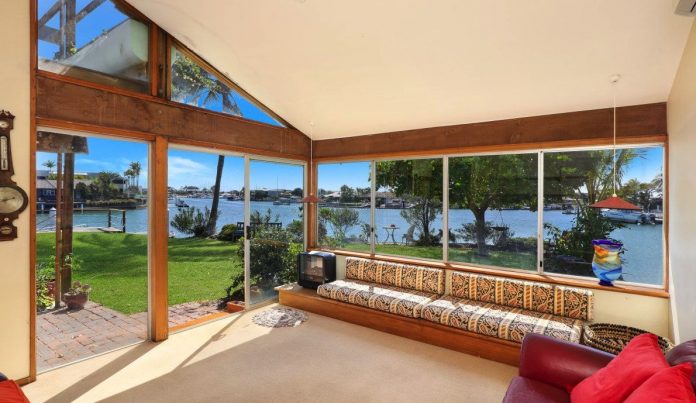 While long distance runners were using Saturday to warm up for Sunday’s marathon, buyers were running just as hard chasing top properties in this tight market.

Investors were in the mix of house and apartment buyers, with interstate buyers from Canberra, Melbourne and Sydney bidding against keen Sunshine Coast residents.

Saturday’s sale of 20 Kumbada Court has set a new record for Minyama.

“This truly is a record price for the deep-water canals,” the vendor’s agent, Trevor Martin of Waterfront Agents, said.

The main canal waterfront property is an expansive four-bedroom home with a north-east aspect and 41.3m frontage.

It is certainly ripe for a major renovation or knockdown by the new owner.

After 53 groups inspected the property, it came down to eight registered bidders.

The bidding opened at $3.5m and finally sold under the hammer to a Melbourne buyer for $4.8m.

“Are you sitting down?” asked Ross Cattle of Define Properties.

It was a long auction with numerous bids, Mr Cattle said.

“The owners wanted to take an offer prior to auction that was around the $1.85m,” he said.

“They wanted to stop the auction about a week ago. We said that if you do that, you may leave a bit of money on the table.

“We didn’t think it was going to be about $560,000 on the table. But we did think with the volume of interest that selling before auction could be risky. Sometimes you need to hold firm and keep everyone for auction day.”

“I think there is a lot of money that is being left on the table around the Coast because people are selling off market, or selling before auction,” he said.  “I think it’s so risky for people and you never know unless you go all the way.”

He said the three-bedroom house at 47 Jones Road in Buderim, which last sold in 2016 for $387,500 and was then partially renovated, isn’t a massive home but opened the opportunity to someone wanting to join the very popular community, which recently was reported as the second most searched suburb in Australia.

The eventual buyer plans to rent out the home to his family.

While Sunshine Beach may be known for its high prices, Friday’s auction of the three-bedroom house at 34 Elanda Street delivered a relatively affordable gem for the lucky buyer, who secured the prime property for $2.515m.

“It’s a renovator’s dream, really a blank canvas or a duplex site or knockdown with good access to the beach and shops.”

Get more properties news sent direct to your inbox by subscribing to our free daily news feed. All it requires is your name and email. See SUBSCRIBE at the top of this article.

The large home with acreage and multiple living spaces at 23 Gleneagle Court in Buderim is now in the hands of an owner/occupier.

Listed by Richard Scrivener and Loren Wimhurst of Next Property Group, seven registered bidders eyed off the expansive property.

Bidding opened at $1.8m. With the contest down to three active bidders, it finally sold over the reserve and under the hammer for $2.035m.

“A beautiful, young family from Buderim,” were the lucky buyers, Mr Scrivener said.