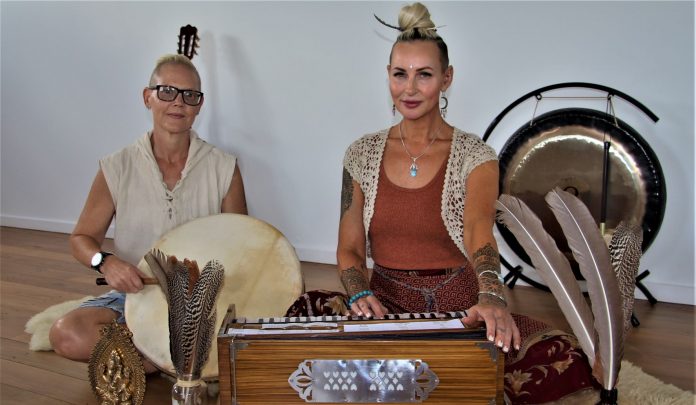 Nirvair Devi has tried to block out the pain of hunger and a fractured elbow as she battled enforced lockdowns during the growing COVID-19 crisis in India.

Survival mode kicked in for the Sunshine Coast Kundalini yoga facilitator in those final few months on the subcontinent last year when she desperately tried to secure a flight back home and was forced to seek help from the Australian Consulate.

She believes the proximity of the beach for tranquil walks with the stray dogs she calls her “angels” and the peace offered by her Kundalini yogic practice that focuses on breath work, mantra and meditation were her sanity saviours during that time.

Sitting comfortably on cushions on the floor of The North Shore Yoga Studio based in Pacific Paradise, Nirvair (formerly known as Kim Miller) is filled with joy for how the universe has delivered her safely in the arms of her new Sunshine Coast community.

“Not a day goes past that I don’t feel so much gratitude here,” she said.

She answered the call of her Amritsar-based yoga teacher to return to India to help him teach in November 2019, and then ran a group in February 2020, based in India.

With Parvinder Singh, she led the group of Australian and French yoga enthusiasts in an 18-day journey where they went deep into Kundalini yogic practices at sacred locations around India.

“We were meant to see the Dalai Lama but he ended up cancelling because Covid was starting,” Nirvair said.

“There was this talk of what was happening … but you’re sort of in this bubble.

“It must have been around the end of February 2020. We got the French home, got the Australians home, and I asked myself: ‘What do you want to do?’ and I’m like: ‘No, this is fine. It will pass. It’s no big deal’. So, I stayed on in India.

“I moved from Amritsar in the north and I went down to Goa in the south which is kind of like the Queensland of India – a beautiful place.

“The next thing I know, once I arrived in Goa, things started shutting down.”

Staying with a friend in tight accommodation in an area known as Arambol, Nirvair breezed through the three-day snap lockdown because some stores  remained open. But she knew she might be in trouble in the small village if a longer lockdown resulted.

“We arranged for a cab driver to go down to a place called Candolim which is still in Goa but it’s bigger.

“It just came to me: ‘It is very important that we have access to food’.

“It’s funny because in these situations, you get very much into that survival mode. It was super-surreal. The cab driver was so scared because no cars were meant to be on the road.

“So, he was ‘OK, I’ll meet you at this time. I’ll pick you up’. It was like this stealth mission to get to this next Point B.”

Three days after arriving in Candolim, the area went into a snap 21-day lockdown.

Everything remained closed for the duration including the large grocery store nearby and local cafes. Staying in an apartment, she did not have the luxury of hotel room service.

The streets became deserted with the closures, adding to the panic and confusion fanned by online news feeds and social media.

“Then you had people roaming around on the street, looking at each other and looking for food,” Nirvair said.

“You’ve got this fear of COVID and then you’ve got the fear of ‘how am I going to feed myself?’.

“So, we would wake up very early in the morning, at 5am,  and would go and walk around the streets and occasionally you might see someone with a little plastic bag and I’d be like ‘what have you go there? Where did you get that?’.

“Most of the locals there speak English because Goa is a fairly  touristy place.

“And they’d say, ‘Go down the laneway, past the Brahman cows and there’s a little old lady selling some tomatoes out of her backyard’.

“It did become a mission, and what would happen is, a lot of people would hear about this place to get some food and then people just swamped the little house, scrambling around trying to buy things.

“There was no social distancing so it was like, ‘OK, who is going to get in amongst it and try to get a couple of things so we can eat?’.

“It was pure survival. It was scary because at that time you didn’t know whether (COVID) picked up on your skin. I remember we would go back (to the apartment) and wash bags and we would wash because nobody knew (if COVID had been transmitted).”

Nirvair’s life really turned upside down in April last year when she slipped over in her kitchen in India, fell backwards and awkwardly landed on her elbow. The elbow was fractured yet, in a state of denial, Nirvair ignored the pain and growing swelling.

“At that stage, no cars were allowed on the roads. I walked around for five days with my arm kind of like that (dangling in a broken looking way). I was apprehensive to go to hospital with COVID fears and basically in denial about what was happening with my arm. No cars were allowed on the roads at that time so we were just walking in 40-degree heat.

“I went up to one hospital and asked for help but they had also closed to general (patients).”

The Australian Consulate, that had come to her rescue with beans and rice earlier, again came to Nirvair’s aid, organising transport to a medical college where her operation took place.

But the hospitals and medical colleges in India are no comparison to the surgically clean, antiseptic-smelling facilities in Australia.

“When I had my operation, I prayed. I called out to spirit,” Nirvair confessed.

“I walked in there and I looked at the mould and the dirt and I was ‘oh sh*t’.

“I was terrified. It was just so extraordinary and so surreal. I was in complete denial.

“I was like ‘no, my arm’s OK, honestly – everything’s fine” and the doctor at the medical college was like, ‘No, you’ve got to have that operated on now’.”

“I kind of blocked it out, during those intense times in India,” Nirvair said.

“I remember waking up in so much pain. And the girl I was living with at the time, the hospital staff actually asked her to help them take me off  the operating table. I was so grateful she was there.

“My friend was playing mantras in my ears, trying to get me to relax back down, because I was trying to fight up off the table. It was just crazy.

“If you need antibiotics, you have to send someone down to buy the antibiotics to bring back to the (medical college) for them to give it to you. The hospitals weren’t meant to be open.”

Nirvair kept the worst of her food and hospital troubles from her parents in Sydney to prevent them worrying further.

It was only during a Zoom call that her mother spotted the elbow cast and Nirvair was forced to explain, if not downplay, the operation.

During the next six weeks, a physiotherapist proved to be a godsend, assisting her with ayurvedic remedies and spiritual support.

But Nirvair knew she had to get out of India as the monsoonal rains approached.

Feeling vulnerable, yet still hopeful while her elbow recovered, Nirvair began searching for a flight home.

She joined Facebook groups of Australians around the world attempting to return home.

“I booked so many flights and they fell through. They’d just cancel.

“You’d be all ready, all packed and it just fell through. Your hopes went from (up there to down there).”

In the end, she found a Singapore Airlines repatriation flight organised by an Australian entrepreneur, putting her faith in instructions that a $3000 eftpos transfer would result in a ticket 24 hours before departure.

That was in June last year.

“Landing back here, in  Brisbane, I went straight into the Marriott into this 5-star luxury and they’re bringing in food parcels,” Nirvair said of her good fortune.

“I was just like ‘whoa, white clean sheets’. I had baths every day.

Forever grateful to be back on home soil, the former Sydney corporate finance high-flyer and hairdresser now looks back on her experiences in India as a time of deep awakening and reflection in which the tools of meditation and yoga became more important to her than ever.

It was in 2013 that her spiritual journey began in Bali, perhaps a little like an Eat, Pray. Love-style epiphany. While sitting with eyes closed, holding hands as part of a Kundalini Yoga Breath of Fire circle of 100 people in Ubud, Nirvair realised “living the dream” wasn’t all about high-paying jobs, property portfolios and stressful mortgages.

From that moment onwards, she felt guided to leave corporate life and complete her Kundalini yoga teacher training.

Nirvair now lives a simple, yogic life. She practises yoga daily and believes her “soul purpose” is to guide others through her Kundalini Yoga and Sound Healing classes, helping them cope with stresses and anxiety that can arise, particularly in these uncertain times.

In October last year, Nirvair met her partner Kavalya, a fellow sound healing practitioner, and together they hold 90-minute weekly classes and monthly two-hour workshops in the North Shore Yoga Studio in Pacific Paradise and throughout the region.

They have a Kundalini yoga retreat coming up in February next year in Verrierdale (see below). 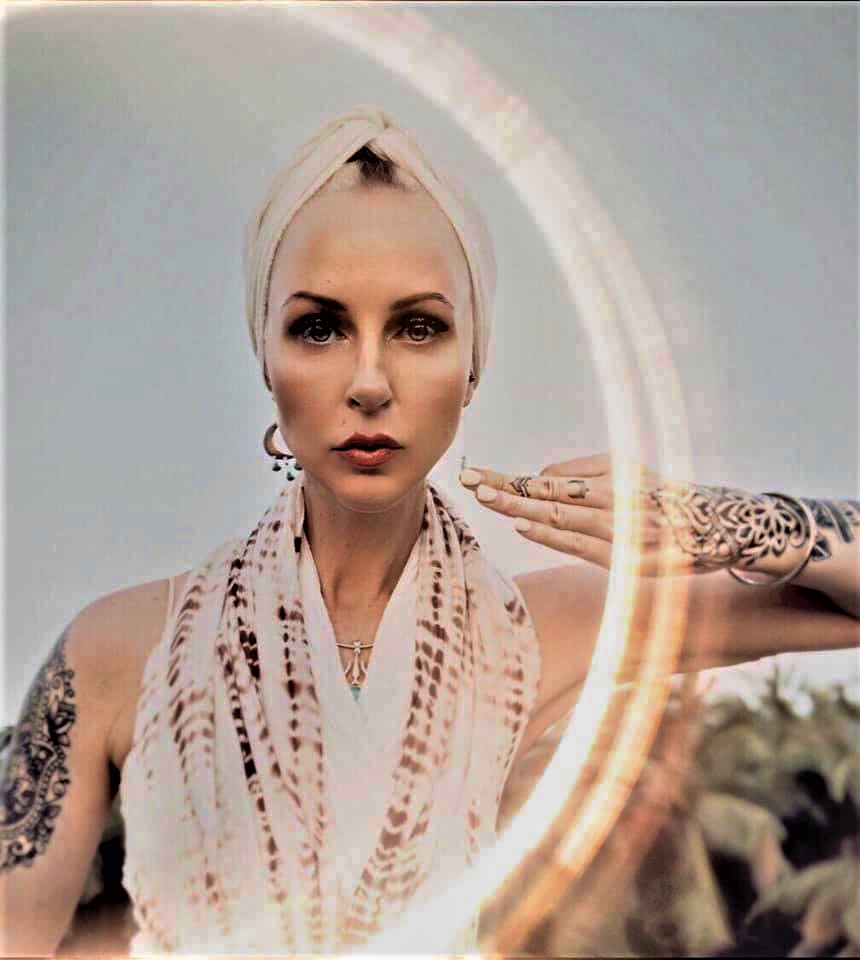 Now Nirvair sees pockets of her new Sunshine Coast community slowly but surely returning to a simpler life, living more sustainably and concentrating on the people and things that really matter in life.

“That is basically what we want to create: that type of conscious community,” Nirvair said.

“Until we can do that, we come here to the yoga studio, we share these yogic teachings, we help people connect, we help them feel like there’s something greater going on out there in the universe – that we’re guided, that whatever is happening, no matter how rough it may feel at times, we are actually all going to come through this.”