Bananas, bullocks and a trail that shaped region’s future

Bananas, bullocks and a trail that shaped region’s future

Rise of Tanawha: bananas, bullocks and a humble trail that shaped the region's future

In the days when Mountain Creek was a clear little stream running through bushland at Tanawha, a bullock trail was carved out of the bush uphill to Buderim. It’s now called Crosby Hill Road.

Robert Sly and his son Allan, lived in a slab hut at Sandy Gully, and needed to get their valuable logs from one of the finest stands of red stringybark on the north coast, to the Buderim sawmill.

Sly bought a 100ha property from the Buderim pioneer Bert Guy in June 1919, and subdivided it into 8ha and 10ha blocks. He then began clearing the bush and planting bananas. When one block was bearing fruit, he would start on the next.

The Queensland sleeper-cutting industry for railway lines had been growing rapidly since the turn of the century and the Tanawha hardwood he cleared had a ready market.

Sly sold his allotments mainly to soldiers returning from World War I who found the idea of farm life appealing. Bananas were fetching a lucrative £1 pound a case in Melbourne which was big money in 1919.

Blocks were sold for £400-£500 which included a two-room weatherboard cottage with a stove and a 4000-litre tank. Purchasers had only to make a £100 deposit.

The trouble was that many of these soldiers had little bush or farm experience and after taking the first crop of bananas, they walked off the land, signing it back to Sly who then cleaned it up and sold it again.

Some of the land was sold four times, although it never made him rich. He earned more from his bananas and timber than his land sales.

The timber was being hauled to a mill at Mooloolah by bullock teams as the road to Buderim went only as far as Crosby’s farm.

(William Crosby and his wife Mary Ann had arrived in Australia in 1910 with their five children and moved to Buderim in 1918. He became the president of the Buderim Fruit Growers and Local Producers Association in 1923).

Mr Nonmus, the Buderim sawmiller, was anxious to get at the Sly timber and helped them complete the link to Tanawha.

Even when they had finished, it was ambitious to call it a road, but it did allow the teams to haul the timber out.

The council of the day honoured its promise to build the two bridges needed over Mountain Creek and the roadbuilders sold the timber they cleared.

At times, five bullockies were needed to pull the timber out of Sandy Gully and up the hill. 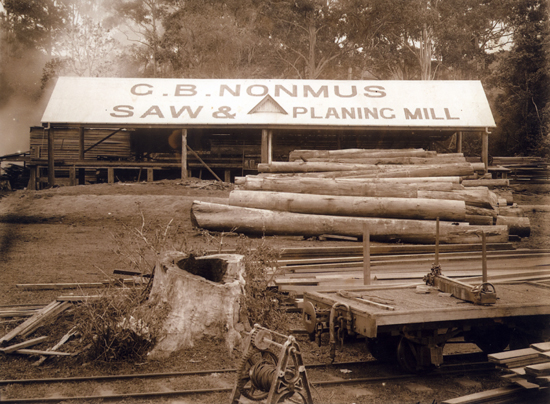 The Sly family remained living in their slab hut with a shingle roof until their first cottage was built in the 1920s. It was called Leahy’s Hut after a landowner in the area and had only one nail.

Luckily, Mountain Creek was clear forest water as they drank it and washed in it.

The sawmilling business was hit hard by the Great Depression, workers were laid off and mills closed.

It was Sly Senior who later moved to have the name of Sandy Gully changed to the commonly misspelt, Tanawha, the name of a legendary New Zealand monster.

Although he didn’t live to see the name change, he did play a part in Tanawha’s early development.