Council’s ‘most aggressive step’ against quarry

Council’s ‘most aggressive step’ against quarry

'Fight 'til the end': Noosa Mayor pledges support for hinterland residents against quarry

Noosa Mayor Clare Stewart says “enough is enough” and the council will “fight ’til the end” to reduce the impact of Kin Kin Quarry on hinterland residents.

The council has formally filed proceedings in the Planning and Environment Court at Maroochydore in the case against Kin Kin Quarry operator Cordwell Resources.

The council is seeking interim enforcement orders specifically for all quarry truck movements to cease during school bus hours.

Final enforcement orders will also be sought, requiring the operators to limit the number of quarry trucks per day, avoid convoying and ensure movements are within the operating hours, with all truck loads covered.

The case was filed last Friday 17 September, and the matter will first be mentioned in court on Friday 24 September.

Cr Stewart said the directions hearing at the court would provide both parties and their legal representatives with a timetable of events going forward.

“Once that has happened, we will know more, but we have certainly put our money where our mouth is, so to speak,” she said.

“Noosa Council has said they would stand with and behind the hinterland community and this is exactly what we are doing.

“We have seen and we have heard the impact that the quarry has had on our residents and enough is enough.

“This is the best and most progressive step and the most aggressive step that we can take and we’re taking it. 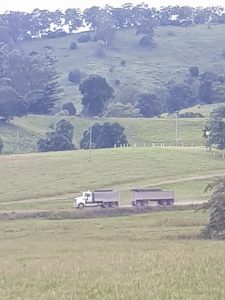 The council then approved the current Quarry Management Plan in 2016.

It says the operation of the Kin Kin Quarry is strictly regulated and supervised by the Council, the Department of Resources and the Department of Environment and Science and that Cordwell Resources is aware of some community concern regarding the presence of quarry trucks on the road in certain areas and at certain times.

Cr Stewart said more than 20 residents had provided statements which would form a critical part of the legal case.

Signed affidavits from hinterland residents, who are impacted first-hand by the quarry, include their personal activity logs of truck movements, as well as video and photographic evidence.

Many of those residents indicated they were concerned for the safety of their community, especially children and other road users when confronted by the quarry trucks on the narrow Pomona Kin Kin Rd, as well as the noise of trucks disrupting the ambience of what was once a quiet rural area.

Moffat Road resident Anita Karen Poteri, 51, wrote that she had moved to the town 20 years ago from London to give her children a rural upbringing.

But from May 2020, she had noticed “a significant increase in number of quarry trucks on Pomona Kin Kin Rd”.

“Three of my four children catch the school bus and I am worried about the school bus driving on Pomona Kin Kin Rd and having to pass by quarry trucks on blind corners and narrow or damaged sections of the road.

“One of my children is a P-plate driver and another has begun learning to drive and I am scared for their safety driving on Pomona Kin Kin Road as they are so inexperienced.

“I recall being woken up numerous times at 5.30am by convoys of at least 20 quarry trucks travelling on Pomona Kin Kin Rd,” she wrote.

“The noise from the quarry trucks can be frustrating and loud at times.”

She said her husband Allan had become angry and depressed at the disturbance to his life caused  by the quarry trucks and that upset her to see him impacted.

Mrs Bonsall is awaiting the outcome of the proceedings to make a decision on whether to stay or leave.

“I love living in Kin Kin and am not ready to leave my community.”

Cordwell Resources has stated on its website that it is aware of support from other members of the community for the quarry and the essential service provided.

“What Cordwell’s Resources seeks to achieve is an acceptance that truck movements are an inescapable and legitimate part of the business and provided the QMP and other aspects of the development approval are complied with, then the roads need to be shared to enable this essential resource to be supplied to the community from within the community – otherwise there will be more trucks on the road travelling longer distances from quarry materials sourced from further afield,” the website says.

“The request by the council in an open letter to the media to stop trucks during school bus times and significantly reduce truck movements to a more manageable level is not in accordance with the development approval and is an unreasonable request to make of Cordwell’s Resources.

“The council has not made such a request to any other business, nor to the construction and essential roadwork projects which utilise the resource.”

Cr Stewart said a community meeting was scheduled for Thursday, September 23, at the Majestic Hall in Pomona, to update residents on the next steps in the legal fight.