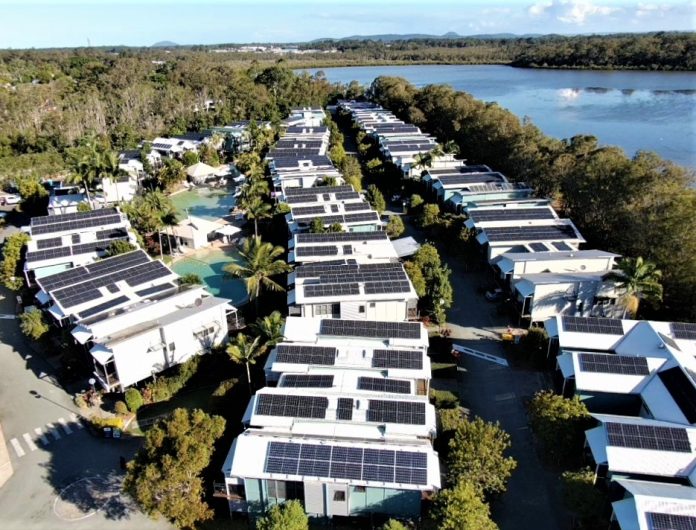 When the sun shines, you can see the smiles on owners at Noosa Lakes Resort Body Corporate.

They’ve just installed Noosa’s largest solar array, believed to be the biggest solar system in a strata titled development in Australia and the first project of its kind in Queensland.

Two years in the planning, the 550kW system will produce 125% of the resort’s energy needs making it carbon positive.

The project has already been heralded as an industry game changer. Rather than costing money, it’s actually making money for the Body Corporate.

The innovative system, owned by all lot owners and funded by a strata loan, creates a revenue stream of 108% of the resort’s historical electricity spend.

“Considering the short payback period and long life of the high-quality components, the investment in sustainable solar energy really is a no-brainer,” he said.

“On the back of the success of this solar revenue project, I have already been approached by other Body Corporate Committees to advise them on a possible solution for their properties.”

Cr Brian Stockwell, who until recently was the Chair of the Body Corporate Committee, believes the model is widely applicable across not just the tourism accommodation sector but many other strata titled properties in Noosa.

“We provided our lot owners with a 10-year financial forecast for the sinking fund and consulted with them throughout the development of the concept,” Cr Stockwell said.

“At the end of the day the project received 94% support.

“It is projects like this that show how we can achieve the target of being a carbon neutral community by 2026.”

Designed by local solar specialists Home and Energy, the system tracks how much solar energy is used by individual lots and how much is exported to the grid.

Each of these flows provide a revenue stream for the Body Corporate projected to achieve a return of more than 20% in the first year.

Clean Energy Council Accredited Solar Designer Gareth Duggan said: “this was a complex site with many different roof orientations and shading issues, but using 3D modelling software to test varying technologies against each other we determined the optimal system”.

Mr Wright acknowledged the success was in no small part a result of “working with a local company with the expertise, that not only aligned with our sustainability goals but with the resources and knowledge to go above and beyond your run-of-the-mill solar offering to provide a solution that exceeded all others.”

The project is part of the resort’s overall commitment to sustainability.

Resort Manager Ryan Rae and his team have been working tirelessly to increase the resort’s sustainability credentials.

Nestled between the shores of Lake Doonella and the Noosa River, the resort is installing timers and LEDs to reduce energy consumption, has a water harvesting scheme for its three large lagoon pools, and is embarking on a progressive landscaping refurbishment to replace exotics with local native species.

According to Cr Stockwell: “the recent IPCC 6 Report and the declaration of a ‘Code Red’ for the planet highlight how important it is to transition rapidly to a renewable energy economy.”

“This project proves that you can be both environmentally responsible and economically rational on the path to reducing our impact on the climate.”