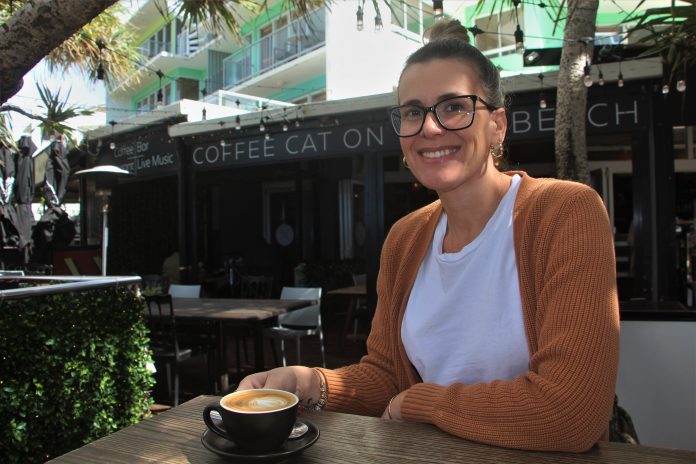 A Sunshine Coast café has been game enough to answer the big COVID question: how do you overcome loneliness, isolation, depression and sheer boredom during lockdowns?

And there’s nothing trivial in how Coffee Cat on Kings Beach Café is pursuing a fun-packed initiative that’s connecting supporters across the world, one social-media event at a time.

Owners Pierre and Haley Mortenson have taken their popular Trivia Night, which has run fortnightly in the Caloundra café on Thursdays for two years, and created a free online version that has become a wide-reaching community service.

Livestreamed on Facebook and Instagram from the Mortensons’ home dining room, the quirky events draw registered teams and interested onlookers Australia-wide, as well as those from the United Kingdom, United States and New Zealand.

After the latest Sunshine Coast lockdown was extended, a snap decision was made to host the café’s first online Trivia Night for 2021, drawing 26 teams.

“We had people watching us from over in the UK and playing along.”

Lockdowns – especially snap closures –aren’t fun and games and haven’t been easy on the small absolute beachfront café in Levuka Ave. They hit the Mortensons hard financially and caused a flow-on effect to staff and suppliers.

The recent extended lockdown thrust upon the region was particularly “horrible”.

“That weekend that we went into lockdown (Saturday, July 31) was a 27 to 28-degree day, so our chef had ordered in big, prepping up for the weekend,” Haley said.

“And then when we got locked down further on the Wednesday (August 4), we were stuck with all this food.

“So, (the kitchen) got really creative and turned it into specials for takeaways. We said to all the staff: ‘If you’re struggling and you want some food, take some food’.”

The Mortensons realised that others were doing it tough and wanted to connect their customers by offering some light-hearted fun amid all the doom and gloom.

Haley said they had no idea at first what impact such a simple idea as an online Trivia Night was having on their community.

That only became apparent when customers returned to the café once the first lockdowns ended.

“They were genuinely and sincerely grateful,” Haley said.

“They’d say, ‘You don’t understand how much we looked forward to that one night all week: all our family would get together online’.

“When you could have 10 people in your house, neighbours would get together.

“Friends would get together on Facetime and all make a team to have better odds of winning.

“When you’re in isolation, you don’t realise how hard people are doing it.

“Then they all come back out and they start talking about how rough it was and how alone they were.

“We had people we’ve never met before coming up to us and saying, ‘Thank you so much for doing that. We just don’t know what we would have done during isolation if we didn’t have you guys’.”

The 1600 views of their recent event’s video and comments on the café’s Facebook page attest to the greater good.

Among them was James Agius: “Tuning in from Sydney! Keen for a night of trivia.”

And Vicki Bauer later added: “It was a great night! Thanks for putting it on for us and both of your efforts x.”

The online Trivia Nights follow the same winning formula: Pierre asks two rounds of 15 general knowledge questions and Haley does the music round where she plays part of a song, then pauses it and contestants have to guess the next line, or the title and artist. The talented family, including two daughters, also has been known to learn songs on guitar and piano to turn 10 music questions into a mini-concert.

Registered teams listen to the questions and text in the answers. Everyone interacts through the comments section as  Pierre and Haley take centre stage for two hours.

The challenge is all in pursuit of fun and isn’t super-serious. How can it be when “Scissors, paper, rock” is used to decide a tie at the end of a night?

The Mortensons have had to work out the internet logistics on the fly, but now have it down pat.

“We have about five devices set up,” Haley said.

“Then Pierre’s got his phone for  fact-checking and whatnot. I have my iPad for my questions’ texts to come through and my daughter has got my phone.

“We have to have all the iMessages connected. It’s pretty hectic.

With teams texting non-stop, messages beeping helter-skelter and scores being collated – not to mention the preparation time – it all adds up to a big personal commitment.

Because “we’re all in this together”, the Mortensons are keen to spread the love: they spend between $100 and $150 each event on prizes from local businesses, and they eat takeaway around the dining table to boost other restaurant profiles during the trivia banter.

When businesses donate prizes, the captive trivia audience hears about those goods and services as a way of encouraging more local support.

The next out-of-lockdown Trivia Night will be held at the café on Thursday, August 19.

But the good news is that our current and future COVID freedoms may not spell the end of online Trivia Nights.

“We have talked about potentially doing it once a month online,” Haley said.

“People just love it. They love not having to leave the house. They wear their pyjamas.

“It gives families interstate a chance to do something together as well.

“We have friends who don’t have social media.  So, they were on WhatsApp with another family who were watching us on livestream.

“They were communicating through phones and another third person was the person texting in. It’s crazy.”