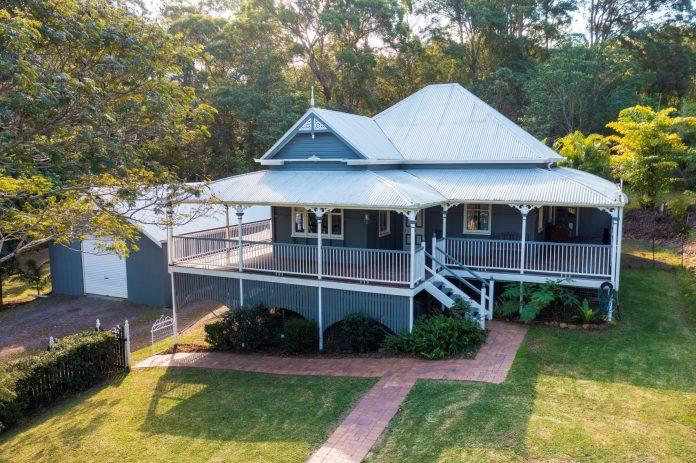 A Sunshine Coast couple has turned an $80,000 investment in an unwanted farmhouse into a lovingly restored family home that is now selling for almost a million dollars.

If only the walls could talk in this sprawling Queenslander – one of the region’s oldest homes.

They could describe the pioneering history of a fledgling state and tell tales of two very different families across three centuries and separate locations.

Built about 1898, the classic residence served the Verrall family well on a farm at Limestone Ridges near Boonah for more than a 100 years.

Then 20 years ago, Russell and Vicky Williamson were looking for an old house with good bones to move to their 4719 square-metre block at 14 Rosemary Ave, Glenview.

The stars aligned for them when they drove through a farm gate, across a paddock and saw the beautifully cared-for home atop a hill with a commanding view across the Scenic Rim.

The house was reborn at a cost of $80,000 to buy and delivered to the 0.5 hectare property in the Coast hinterland, welcoming the Williamsons with their then two teenage sons and 12-year-old daughter.

Now, as empty-nesters, their new life beckons in Tasmania once they find a buyer for the historic property, for sale “in the high $900,000s”.

Agent Paul Blackledge, of Image Property, is selling the Rosemary Avenue retreat.  The Williamson family members hope to attract someone who also adores the Glenview home’s history and the sense of nostalgia and childhood memories it evokes.

“It’s got an emotional attachment (to us),” Vicky said.

“The character. The feel of it. It’s just a feelgood house. It sort of hasn’t hit us properly yet.”

And Russell admits “it will be hard to drive away when we leave”, but “we’ve been there 20 years and we feel it’s time to move on”.

The home’s unique aroma, however, is perhaps what they will miss the most.

“You can smell the pine,” Russell said.

“If we go away for a holiday for couple of weeks, or even a week, and we come back, as soon as you walk in you can smell it.”

The Williamsons admit they’re walking away from something special.

“We do actually love the house. It’s got a lot of character,” Russell said.

“Every single person that comes around … they can’t believe it. They walk through the house and go ‘Oh, look at this!’.

“It’s not a big house but it’s not a bad size for an old house.

“I’d say they must have had a bit of money back then to build a house like that. A lot of the houses around the turn of the (20th) century were little square boxes like miners’ cottages: a four-roomed house with a corridor down the middle.

“Nowadays, these houses are really hard to find.”

Vicky and Russell still vividly remember the first time they saw the unique hand-sawn home and the serendipity that followed.

They previously had moved a 1920s house and flipped it in Mooloolah. But as suburbia began encroaching on their paradise, they decided to take on a similar project again “down the road”.

Russell said they had looked all over South-East Queensland, including Toowoomba, with their limited funds.

One real estate agent showed them a house out of their price range that they could use as a comparison.

“We went out there and had a look at it and just fell in love with it,” Russell said.

“The funny thing was, we didn’t have the money at the time to buy it.

“It sold. And we were a bit upset.

“The guy about two weeks later rang back and said (the sale) fell through because where they had to move it to, (the council) wouldn’t  allow it on the land. So he said, ‘Look, Make me an offer’.

“We ended up getting it cheaper which was really good.”

The original homestead, built using materials from the surrounding area, was on a farm owned by the Verrall family on Verralls Road.

“It sat on top of the hill – unbelievable views of the Scenic Rim all around,” Russell said.

“The house was in amazing condition: all original timbers.

“It’s got the wide hoop pine boards on the floors, ceilings and walls, and the windows and doors are cedar.

“All the fretwork on the verandas is original.

“All the outside of the house, all the timber work, all the veranda posts, even the decking on the veranda was all really good.”

Russell and Vicky consider themselves custodians of the house and have been privileged to learn some of the history associated with it.

“After we moved the house up here, we did a bit of digging,” Russell said.

“There was an old granny that lived in a house just down the road with her kids and she was a descendant. She grew up in the house.

“She was a Verrall. She might have been one of the daughters from back in the day.”

Vicky said once the home was established at Glenview, some of the Verrall relatives “came up and did a bit of an inspection” and told stories of how it looked in the old days.

“In the front room where the leadlight windows are, they had a lot of stuffed birds and animals on the walls,” Russell said.

“In one of the other bedrooms, apparently the lady had a shoe fetish.

“She had a big rack in corner with all these shoes.”

Vicky added: “The kids weren’t allowed to go into any of these rooms.”

Russell said verandas initially wrapped around the whole house at Limestone Ridges, including where the kitchen, dining area and bathroom now stand at the back.

“The original kitchen and laundry was a detached building out the back and they had a walkway from the back veranda.

“They used to do that so if the kitchen burned down, the house didn’t burn down.

“In the ’30s, they enclosed the back area and changed that. Luckily, they didn’t enclose the whole verandas like a lot of them did.”

Over the years, the Williamsons added “a few of our touches”, as well as antique and vintage furniture in keeping with the look of the home.

They’ve had to sell much of that to prepare for the move. But although they have not yet secured a property, Russell, a Sunshine Coast Antique Car Club member, is certain of one thing: he will be taking his 1926 Studebaker Roadster, his 1950 Chevrolet ute and his collection of vintage bikes with him.

“I’m going to take them all. I know it’s going to be hard and costly. But I just have to do it.”

To see the listing visit: imageproperty.com.au/homes-for-sale/14-rosemary-avenue-glenview-qld-4553/