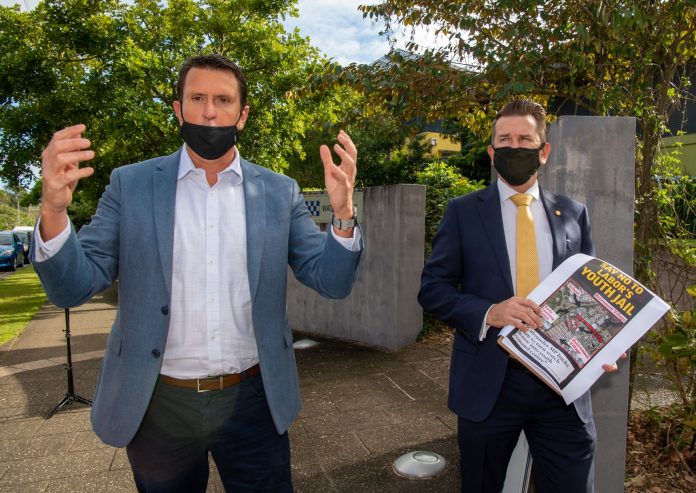 Community anger is ramping up against the proposed youth remand centre in a repurposed Caloundra Watchhouse as thousands of residents and businesses join the fight.

Cr Landsberg will submit a notice of motion asking councillors not to support the State Government’s proposal because it lacked clarity on the extent and nature of the facility and appropriate engagement with the community.

Member for Kawana Jarrod Bleijie said in addition to the online petition, which already had attracted 2000 signatures, almost 500 people had signed paper versions in Caloundra businesses to “say no to Labor’s youth jail”.

About 7000 flyers with a QR code taking people to the youth remand centre petition will be distributed in letterbox drops around Caloundra, Kawana and Caloundra South (Aura) next week.

An extra 7000 flyers were printed and ready to go into other areas of Caloundra after that.

The petition was launched on Monday, July 12, with a press conference attended by Mr Bleijie, Member for Ninderry Dan Purdie and Cr Landsberg, along with more than a dozen community group representatives, outside the watchhouse on Gregson Place, off Caloundra Road, next to the Caloundra Police Station.

The proposed 28 to 30-bed facility — set to cost $16.4million over four years — has been labelled a “youth jail”. The 16-year-old facility at the gateway to the CBD would house young people on remand but also act as an overflow for other similar centres in Townsville and Brisbane.

Mr Bleijie said the 2000 signatures had been passed as of Tuesday, following a Facebook campaign and word-of-mouth support from community groups, businesses and residents.

“I’m pretty happy with that at the moment — 2000 online signatures and more circulating in the public domain,” he said.

“I’m confident we’ll be able to get this position changed from the government.”

Mr Bleijie, a former Corrections minister, Attorney-General and minister for Youth Justice, said the youth remand centre proposal had received more than 500 comments on his Facebook post and “by far the majority are supportive of the petition”.

“They’re very angry to the location and I think they’re angry because the story keeps changing from the government,” he said.

While parliament does not sit again until September 1, Mr Bleijie said an opportunity may exist to table the petition during the youth justice section of the upcoming Budget Estimates process.

He expected to write to the government about the number of signatures to the petition in the next few weeks.