Barty our first female in Wimbledon final in 41 years

Barty our first female in Wimbledon final in 41 years

Ash Barty has roared into the Wimbledon final, the first female Aussie to do so in 41 years 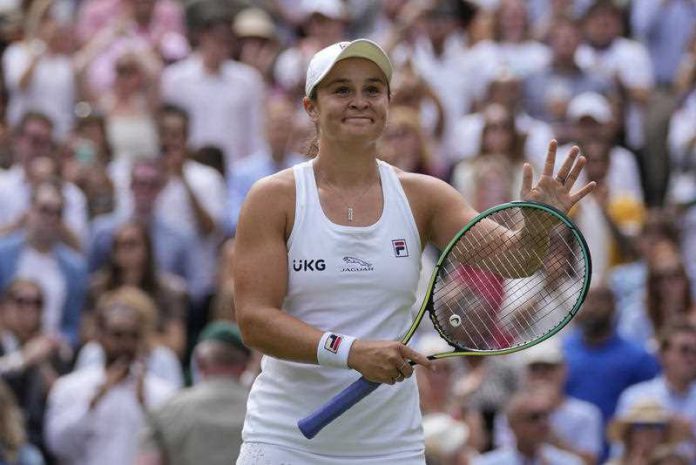 A selection of teams from around the region are celebrating in earnest, after claiming this season's silverware. The Kawana Dolphins are savouring their tough win More
More
News

Roos improve in leaps and bounds to reach State final

The Maroochydore Roos are poised to cap a remarkable rise through the ranks on Saturday, when they compete in the Queensland grand final. The men More
More
News

When Allen Gotts “lost” his left leg after a bunion operation 11 years ago, he could have been forgiven thinking his football days were More
More

Ash Barty has become Australia’s first woman finalist at Wimbledon in 41 years after beating Angelique Kerber in the semi-final.

Barty produced the performance of her life to defeat former champion Kerber.

Living up to her world No.1 billing, the Queenslander reckoned she’d never played such a fine match after prevailing 6-3 7-6 (7-3) in what she had called her “ultimate test” on Thursday against the rejuvenated three-time grand slam winner on Centre Court.

In truth, that ultimate test is yet to come on Saturday when Barty will tackle Karolina Pliskova, the tall, big-serving Czech who blitzed 14 aces as she tamed Aryna Sabalenka 5-7 6-4 6-4 in the other power-packed semi-final.

Barty, the first Australian women’s finalist since her idol and mentor, Evonne Goolagong, who won the title in 1971 and 1980, simply smiled: “Being able to play on the final Saturday here at Wimbledon is gonna be just the best experience ever!”

This can’t have been far behind, though, for the popular figure from Ipswich as she became Australia’s first singles finalist – man or woman – at the All England Club since Mark Philippoussis lost to Roger Federer in 2003.

And if she produces this quality in the final, having crashed down eight aces and 38 winners, including 18 whipped from her glorious forehand, the 25-year-old is in good shape to become the nation’s third champion in the Open era after Margaret Court and Goolagong.

It was the highest quality women’s match in the tournament, with Barty declaring to Centre Court: “This is incredible. This is as good as a tennis match as I’ll ever play.

“I’m incredibly proud of myself and my team and now we get a chance on Saturday to live out a childhood dream.

Back on Centre Court where she’s bloomed, first slowly and then majestically, into the tournament, Barty played her sharpest set of the fortnight in the opener before withstanding the sort of inspirational form from Kerber that took the German to the 2018 title.

Kerber’s 33 now and has been on a downward spiral this past year with her ranking having plummeted to No.28.

But she won a pre-Wimbledon tournament in Bad Homburg and has been completely re-energised back at her happy Wimbledon hunting ground.

So Barty really did have to produce some supreme tennis to fight back from 5-2 down in the second set and prevail after playing an immaculate tiebreak to move into her second grand slam final after one hour 27 minutes.

The only time she’d looked nervous was at the very start, opening up with a double fault, but once she’d saved a couple of break points, she was quickly into a rhythmic stride.

Having dictated in the opening set, Barty suddenly found herself on the retreat at the start of the second as Kerber reprised some of the glorious tennis that had blown Serena Williams away in the final three years ago as she broke to race to a 3-0 lead.

“Angie is an incredible competitor. She brought out the best in me,” reckoned Barty, who produced three exceptional games when 5-2 down.

“Being able to challenge myself against a champion like her, it was just nice to play a really good level throughout the whole match.

“I fought and scrapped when I had to, controlled the ball when I had to. That match was a great level, the best level I’ve played in quite some time.”

Serving for the set, Kerber faltered, with Barty cashing in to earn a break to love with a scintillating cross-court forehand.

Then she took control, winning 10 straight points as she powered into a 6-0 lead in the tiebreak, with the help of two more killer forehands and an ace.

Kerber could only delay the inevitable, courageously saving three match points before finally netting a backhand as Barty celebrated becoming only the fourth Aussie women’s finalist in the Open era after Court, Judy Tegart and Goolagong.

I thought I would mention a few things that I find quite ridiculous in the NRL. Firstly, crusher tackles and high tackles that are put More
More
News

A new Indigenous rugby league carnival is set to attract almost 30 teams from around South-East Queensland. The Sunshine Coast Bunyas Knockout will be held More
More