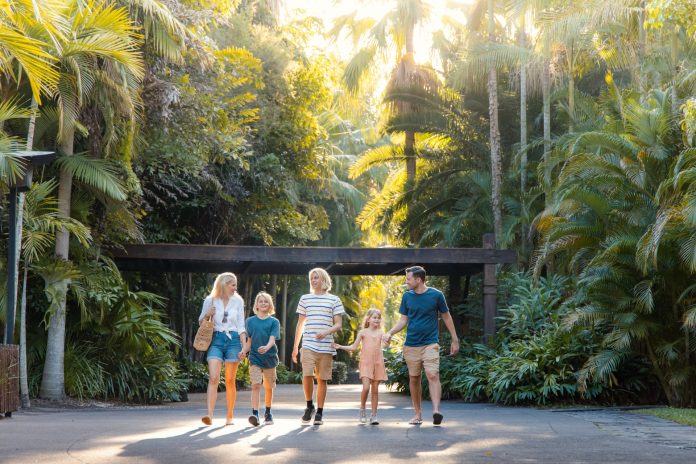 Prime Minister Scott Morrison has outlined a four-phase plan to end lockdowns and get Australia through the pandemic — but the strategy is linked to vaccination rates.

Australia will also halve international arrival caps until at least next year over fears of the Delta strain which plunged numerous states into lockdown.

It comes as the Sunshine Coast’s lockdown will end as scheduled at 6pm Friday along with Noosa and most other local government areas, but Brisbane and Moreton Bay will endure another 24 hours.

Masks will remain mandatory for the next two weeks as a measure to contain any further spread even after lockdown is lifted.

Keep up-to-date with local stories by subscribing to our free news bulletin, direct to your inbox once daily: Go to SUBSCRIBE at top of this article to register.

Following Friday’s National Cabinet meeting, Mr Morrison said states and territories had agreed on moving from a strategy of suppression to one of managing the virus.

In the first stage, which Australia is now in, premiers and chief ministers agreed lockdowns would be used as a last resort.

Home quarantine is also expected to be trialled for fully vaccinated overseas arrivals, along with capped entry of students and economic visa holders.

The second phase will start when an undetermined percentage of Australians are fully vaccinated against coronavirus.

The government is still hopeful of offering all people over 16 a jab by the end of the year, despite just eight per cent of people being fully vaccinated.

That threshold would pave the way for eased domestic restrictions for vaccinated people, with lockdowns only expected in extreme circumstances.

More vaccinated people would be allowed to enter Australia and arrival caps for unvaccinated travellers would be returned to previous levels.

Mr Morrison said stage three would involve treating coronavirus like other infectious disease including the flu with phase four the “back to normal” mark.

Hotel quarantine is also facing another review after 26 virus breaches since the start of the pandemic.

Mr Morrison has pledged a percentage of the eligible population being vaccinated  would lead to major changes in restrictions.

That figure would be determined through scientific modelling expected to be completed within a month.

The number of people allowed to enter the country each week will fall from 6070 to 3035 after premiers sounded the alarm over the Delta variant.

During the reduction, which starts on July 14, there will be more government-facilitated flights to bring Australians to the Northern Territory’s Howard Springs quarantine centre.
Demand for the flights is expected to rise under smaller caps.

“A new deal for Australians today to get us to the other side,” he told reporters.

The Sunshine Coast’s lockdown will end as scheduled at 6pm Friday along with Noosa and most other local government areas, but Brisbane and Moreton Bay will endure another 24 hours.

Masks will remain mandatory for the next two weeks as a measure to contain any further spread even after lockdown is lifted.

Premier Annastacia Palaszczuk said there were three new locally acquired cases, two of which popped up on Friday morning and prompted the city lockdown extension.

One of the cases was the partner of the woman who worked at the Qatar Airlines check-in counter. It turns out he was the source case and passed it on to his partner.

The man works as a baggage handler and is believed to have picked up the virus from overseas cabin crew.

The two worrying cases were a mother and daughter from Carindale who had “been out extensively around Brisbane”, including West End and the city, while they were infected.

Their vast movements prompted authorities to seek an extra 24 hours’ lockdown for Brisbane City and also for Moreton because of links there to the airport case.

Chief Health Officer Dr Jeannette said the extra 24 hours would give contact tracers time to get on top of the latest cases and track down close contacts.

Southeast Queensland and Townsville have been in lockdown for three days to help authorities trace and contain seven separate virus clusters.

The state government is confident all but one outbreak in Brisbane is under control, so lockdown will end in Noosa, Sunshine Coast, Ipswich, Logan, Redlands, Gold Coast, the Scenic Rim, Lockyer Valley, Somerset and Townsville at 6pm on Friday.

Residents of those areas will still have to wear face masks outside of their homes, unless they’re exercising, for the next two weeks.

The state is dealing with another four separate outbreaks, believed be the Delta strain of COVID-19, in two miners who arrived from the NT, a Virgin crew member and a Brisbane hospital worker.

A case in the Alpha variant outbreak at a Brisbane Portuguese club has also been admitted to ICU overnight, but they’re not on a ventilator.

Deputy Premier Steven Miles has also repeated a call for quarantine caps to be cut warning the state’s system will hit capacity on Friday.

He said there there 285 rooms left with 259 international arrivals and an unknown number of domestic arrivals due.

“It will take seven days for our police and hotel quarantine coordinators to get a new hotel up and running and so it’s absolutely critical that we see that cut in the number of international visitors,” Mr Miles said.

Meanwhile, Ms Palaszczuk said every eligible Australian should be offered a vaccine of their choice before the international borders are reopened.

“You think about it, if for example members of your family had not had that offer of the vaccine, and the virus came in, and they ended up on ventilator, you wouldn’t forgive yourself,” she said.

“So I think every eligible Australian should have the opportunity to have been offered a vaccine and then I think we then need to look at (that).”