Passion and inspiration behind burger dream

Passion and inspiration behind burger dream

Couple reveals the passion and inspiration behind their burger business dream 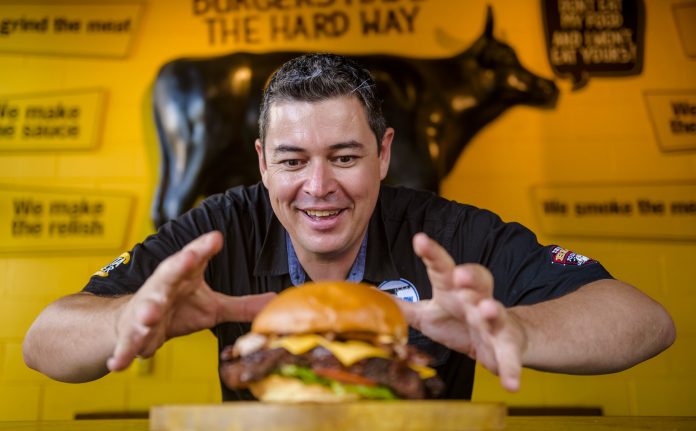 After a year-long trip to America in 2008 and returning home with a love of burgers and less than $1000 between them, a Queensland couple has turned their food passion into a reality.

Some 13 years and 17 stores later Brent and Amy Poulter’s company Getta Burger continues to grow, and locals can now get their hands on a mouth-watering feed at the new Warana store.

Getta Burger Warana opened in May and Mr Poulter said it was already proving popular with the locals.

Something that sets Getta Burger apart from others is the company’s approach to make all their patties and sauces themselves, producing more than a tonne of barbecue sauce every week.

“We manufacture all our own products – we grind and press out patties every day,” Mr Poulter said.

“We smoke large quantities of beef brisket and pulled pork.

“We make barbecue sauce and the relish, so everything is done fresh and by us.”

Mr Poulter, who also owns the recently opened Cách Song in Noosa, and Low N Slow Meat Co in Brisbane, said Getta Burger came about after an idea to start a food truck eight years ago.

“When we got back from America, we had $1000 between us. We went back into our careers; Amy was in HR and I was a concreter.

“It took us about three or four years to do something about our passion that we found in America.”

Eventually that passion led to Mr Poulter spending 18 months building his food truck, That Barbecue Joint, in his backyard.

“We started going to the markets on the weekend about seven years ago.

“It got quite busy so I leased a run-down ex-fish and chip shop in Carina (Brisbane) so I could prepare and do a lot more out of the food truck.”

“About six months into that we thought we would develop into another brand and see if we could sell a few burgers to pay the rent. So, that’s where we started Getta Burger.”

Do you have a business success story you want to share? Let us know about it via news@sunshinecoastnews.com.au

Mr Poulter said the most popular menu item was the Getta burger, a traditional patty with salad and cheese, but he personally had two favourites.

“The other favourite is the cheesy brisket.”

When choosing destinations for a store, Mr Poulter said he liked the idea of giving customers who live in the suburbs the chance to enjoy something usually found in the city and he hoped to open more Sunshine Coast stores in the future.

“We like to operate in areas such as Warana where great people live and giving an experience you’d traditionally have to go to the city for. We tend to fill that burger gap in that space.

“With Warana looking the way it is, has definitely spiked some interest in me to continue to master plan the Sunshine Coast and get a few more up and running.”