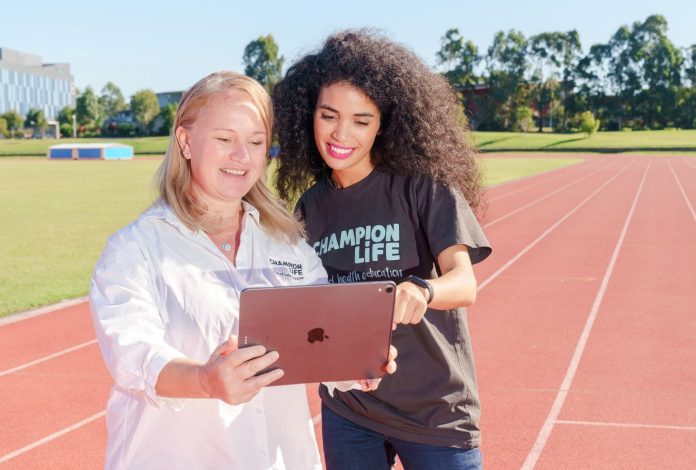 You probably have never heard of them, but this unique Sunshine Coast team enriches the lives of 40,000 young people.

Champion Life is a unique, web-based platform that helps schools strengthen the mental and physical wellbeing of their students through movement, mentoring and monitoring.

As Australia faces its greatest challenge to get kids moving and nurture life-long physical activity, its expertise has never been more vital.

Champion Life was launched in mid-2018. Using videos featuring a wide range of role models, it now reaches students in more than 70 schools in every state and territory.

More than 75% of those schools are in low socio-economic or remote areas.

The platform has been a godsend for small schools without full-time physical education teachers, and also has played its part in motivating students in remote learning situations during COVID-19.

It acknowledges that not every child is inspired by an athlete. Not every child can see themselves competing at an elite level. They need more relatable role models – ones who look like them, have similar interests and backgrounds or share their problems and dreams.

Among the Champion Life mentors is a Downs Syndrome ambassador, magician, Indigenous ophthalmology student and part-time dancer, as well as a Moroccan PhD candidate who can speak English, French and Arabic.

In the Body Sets, children join in the 350-plus fitness, health and wellbeing videos presented by more than 100 role models from diverse backgrounds, cultures and physical abilities.

The role models give a short talk about themselves and offer healthy life tips to engage the students.

Founder and managing director Kym Hunter readily acknowledges that her Champion Life online children’s wellbeing platform is a nod to her own upbringing.

The Peregian resident grew up in Canberra in the 1970s with good habits instilled by her single mother: a primary school physical education teacher.

“My dad died when I was six, so it was just mum and I,” Kym said over coffee in the sunshine.

“She was an early adopter of health trends and always used physical activity to help us feel better.

“Every morning, we went for a walk up the mountain (Mt Majura).

“It was sort of non-negotiable. I didn’t even think to whinge about it. It was just what you did.

“If I was bored/tired/hungry, she would say, ‘Go jump on the trampoline. Go play outside’.

“So, it was this really different upbringing to what a lot of parents have to deal with now. And I was really lucky to be able to pass that on to my own kids.”

This simple philosophy – that movement not only helps physically but also wholistically to improve mental health, attitude and motivation to tackle anything life throws up at you – is something that has allowed Kym to bounce back from Ross River Virus and other life-changing events in recent years.

It’s something she instilled in her four children, now aged from 16 to 24.

And although Kym’s mother died 14 years ago, her legacy lives on in the foundations of Champion Life.

As part of the program, each child rates how they are feeling by a simple emoji scale before and after the three to five-minute exercises (generally showing them that their mood is better after physical activity).

Then teachers can daily monitor each child’s wellbeing at a glance through a dashboard working on a traffic light system.

With Challenges, the students watch an activity, practise it and upload their version to the platform as proof of completion, for their teachers’ feedback.

The Body Sets (or what Kym calls “brain breaks”) are designed to get children moving regularly through simple actions, such as star jumps and knee lifts or yoga poses, that also help make them more focused later in class.

Kym has a background in sport science, with a degree from the University of Canberra.

After a five-year stint as a massage therapist with the Australian Institute of Sport, she turned her focus to helping people with disabilities become more physically active and participate in sport and other physical activity before realising she wanted to ensure the average person developed healthy fitness habits for life.

Kym lamented the loss of natural play, the over-emphasis on competitive sport for children and the undervaluing of fun, inclusive physical activity such as walking.

Instead, she applauded the move towards physical literacy: giving children the motivation, confidence and competence to embrace exercise as second nature.

“Some schools focus too much on competitive sport and don’t provide enough focus on just being active for the sake of it,” she says.

“My classroom teacher in Grade 6 in Canberra used to encourage us to run around the oval three times before we started at 8.30am. Things like that were really great and were lost.

“Australian sport and physical activity need to do a complete reset.

“How do we get more Olympians? Well, in order to do that, you need to go way, way back to little kids with this physical literacy for life.

“There’s always been such a competitive sport culture in Australia that we focus a little too much on that. Get them to move first and that can then lead into sport for enjoyment.”

She is adamant physical activity in primary school should be considered as important as NAPLAN testing and other core subjects … and as an outlet for the tests’ associated stress.

“Part of the reason Champion Life evolved (was asking) ‘How do we get the average child to understand what I knew, what I was taught, if their family doesn’t teach that to them or if somehow that part in school is missed,” Kym said.

“If you’re not moving enough and making healthy choices, it makes it really hard to do anything else well.

“If you start with a physically healthy school population, you are going to have better results overall.

“Many great teachers are making up their own movement breaks and they’re also keeping an eye on their kids’ wellbeing. We’re just making it way easier to do that.” 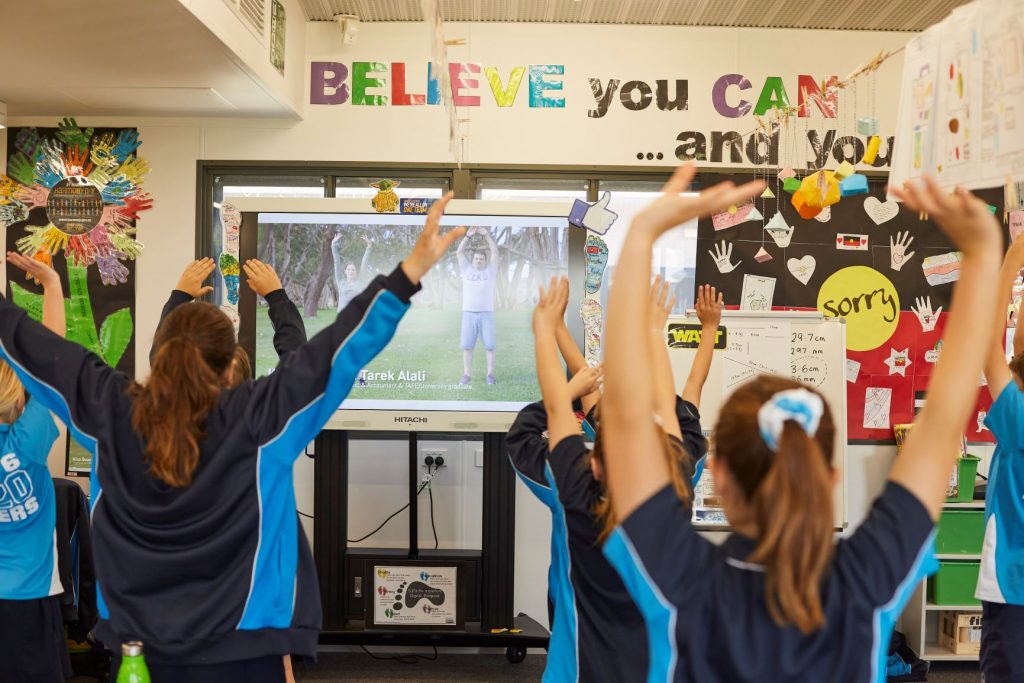 “Probably the best reaction we get when we go to schools is when kids (who typically would not see themselves as being good at sport) just go “You don’t even have to be good at sport to do this’,” Kym said.

“It’s such a revelation for them.”

Through a University of the Sunshine Coast Engage Research Lab project, she found her development team that built the platform and continues its evolution, notably through teacher requests.

“We’ve adapted and grown the program as we get more schools and find out how they work and adjust it so each school can use it in a way that suits them,” she said.

After a steep learning curve in starting her business model, Kym realised that just asking elite athletes to become ambassadors and give one-off talks in schools was never going to be enough.

That’s why she engages a broad range of role models.

“The thing they all have in common is that they just like to be active,” Kym said.

“They’re not all the famous athletic-type person because I just wanted every child to be sitting in class and being able to connect with someone in that way.

“So, whether it’s a kid who is really interested in physics and sees (someone) talking about biomechanics, that’s a connection; or someone who has autism and sees the presenter is also autistic.

“It’s basically saying, ‘You don’t have to be an elite athlete to be active or to do sport, but you can just have a go’.”

With 60% of parents of the student population born overseas at one of the Champion Life schools in Mt Druitt in Sydney, Kym told the story of one of the role models: a refugee who had been an insurance actuary in Syria.

“He talked about how, after he came to Australia and was looking for work, the thing that kept him feeling okay and kept his mental health together was that he walked a lot,” she said.

“He found he liked walking and he could meet people in his new neighbourhood and he could practise his English.

“We had a teacher from one of our schools in Sydney who said that this little girl came up to her and she was a Syrian refugee as well. It was the first time she had ever seen herself positively represented.”

Kym’s long-term plan is to create a global physical activity movement in schools, and that dream is already under way as the Champion Life platform is being trialled in two international schools in Singapore.