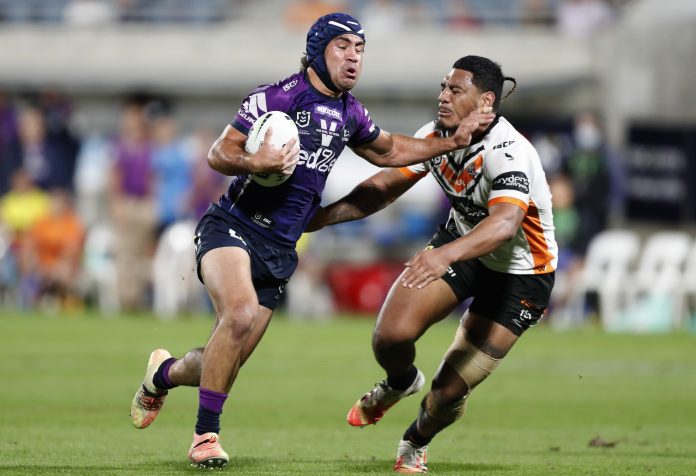 Melbourne Storm will try to add to their eight-match unbeaten run at Sunshine Coast Stadium, when they collide with Wests Tigers on June 19.

The team, which has made the region their home away from home in recent seasons, was due to play the Tigers in Melbourne, but the match was relocated to Bokarina due to the on-going COVID-19 situation in Melbourne.

The decision to move the game was made following continued consultation with the NRL, Victorian Government representatives and Melbourne and Olympic Parks.

It follows on from their Round 13 match against the Gold Coast Titans being played at Sunshine Coast Stadium in front of almost 8000 fans earlier this month.

The Storm also won all seven of their games at the venue last season, when they relocated to the Sunshine Coast because of the pandemic. They beat the Tigers there 50-22 in September.

Tickets for the Tigers game are on sale via Ticketek.

The work of Storm’s major charity partner, the Starlight Children’s Foundation, will be highlighted in the lead-up to the Tigers clash, as well as at the stadium on gameday.

For the past five years, Storm has worked with Starlight who are dedicated to brightening the lives of seriously ill children, adolescents and their families through a range of programs, including wish granting and a Starlight Express Rooms in every major children’s hospital in Australia.

To kick off the build-up to Round 15, NRL squad members Cooper Johns and Nicho Hynes had a special online Starlight TV catch-up with some children currently in care during the week.

Storm CEO Justin Rodski said it was unavoidable for the Tigers game to be played away from Melbourne.

“I can understand the disappointment our members are feeling about missing out on seeing Storm at home over this current lockdown period,” Rodski said.

“It is shared by our players and staff who love our games at AAMI Park and playing in front of the Purple Army.

“It’s a situation none of us wish to be in but moving next week’s game is the only option we have to allow our team to keep playing in the competition.

“This week is also very special to our club as it gives us a chance to highlight the outstanding work the Starlight Children’s Foundation does for our community.”

Storm will continue to monitor the COVID situation in Victoria and will take advice from the NRL and governments before making any decision on future games.