Coast will have to 'rethink traditional housing' as population explodes, expert warns 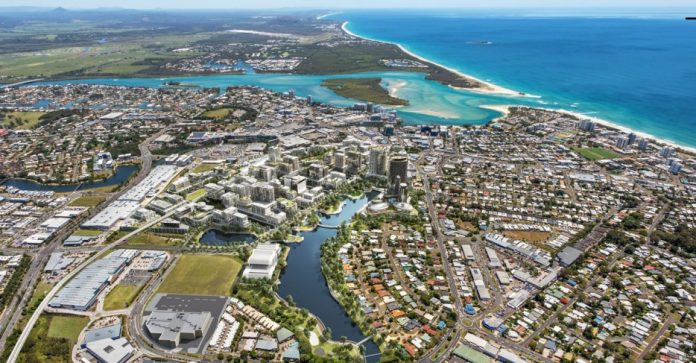 The Sunshine Coast must rethink ‘traditional’ housing and consider more medium-density living to accommodate the population equivalent of ‘two to three Auras’, a leading property analyst has warned.

Direct Collective’s latest market report, Sunshine Coast The Future 2021, takes a ‘deep dive’ into growth and housing data as the region faces the most significant “protracted property upswing” of its type in Australia.

Unless more medium-density homes are built for the exploding incoming population, chief operating officer Mal Cayley says locals would be squeezed out and forced to move away.

Medium-density housing can range from about 25 to 80 dwellings per hectare, although most commonly sit around 30 and 40 dwellings/hectare, typically consisting of semi-attached and multi-unit housing and low-rise apartments.

The report reveals a dramatic undersupply in all types of housing on the Coast now and in coming years that it says will not be solved by building more and more ‘traditional’ detached houses on the suburban fringes.

Of the next 200,000 residents, only 70,000 are catered for with detached housing in ‘greenfield’ estates under the council’s current planning scheme, the report states.

That leaves a stark deficit for 130,000 people, who would instead need to live in in-fill development, which usually takes the form of duplexes, units and apartments or smaller land subdivisions in hinterland areas.

This is the population equivalent of ‘two-to-three Auras’ who would need to live in medium-density housing, explains Mr Cayley.

Mr Cayley said the Sunshine Coast would have to start “having a conversation” and thinking laterally about different types of medium-density homes while still protecting lifestyle and the region’s liveability.

“The real challenge for the Sunshine Coast is the changing face of the type of property needed,” the report states.

“In short, we’re not building enough and what we are building is too much of the wrong product. Instead we need to build more where the highest demand exists.”

The research paper shows that currently 70 per cent of current housing stock on the Coast is traditional ‘detached dwellings’ and most of these are larger three-to-four bedroom homes.

But the vast majority of these houses — 62 per cent — are occupied by only one or two people, predominantly older singles and couples.

He said the future housing breakdown would need to be around 20 per cent traditional detached dwellings, 20 dual living such as granny flats and studio apartments, 30 per cent townhouses and 30 per cent apartments.

Mr Cayley said the huge predicted population growth of 182,000 extra residents by 2041 could not be stopped as people moved to the Coast to take up the increasing number of jobs and to fulfil their lifestyle dreams.

But unless we found ways of fitting everyone in, he warned that local people would be the ones squeezed out and forced to move away, as was already starting to happen.

“If we’re creating jobs and creating opportunities to live here and earn, it doesn’t stop people from coming, especially if they’re coming from somewhere else where prices are higher,” said Mr Cayley.

“But what would happen is, they move here and squeeze out the people who are here.”

Mr Cayley said rather than succumbing to misconceptions and fears about medium-density living, it was time to have an informed discussion about how to ensure residents had a roof over their heads that was also affordable.

“The way we live over the next 20 years is going to change more than the last 50 years,” he said.

“People will come, they are coming, and we need a solid plan for managing that demand in a way that protects the culture and lifestyle of this region.”

Leading demographer Bernard Salt said that as Baby Boomers aged into their 70s and 80s, there would be greater need for more ‘compact’ living like townhouses rather than the “large rambling houses” and the McMansions of the 90s and 2000s.

Mr Salt said medium-density housing was not the same as high-rise and did not mean the Sunshine Coast would end up like the Gold Coast if it embraced in-fill development.

“There is a happy medium between low-density like you have on the Sunshine Coast and the high-rise on the Gold Coast,” Mr Salt said.

“Medium density does not mean high-rise towers as is often sighted in dramatic ways to try and prevent any sort of development.

“There are 20 stages between low density and the kind of high-rise seen at Main Beach on the Gold Coast. There are all sorts of gradations in between.”