The giant Caloundra shed that will build mateship and pride 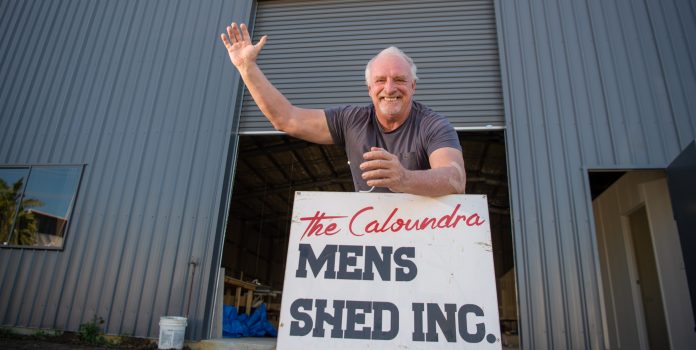 A massive steel shed rising from its foundations in the Moffat Beach Business Park has the capacity to do much more than house trade tools and workbenches.

The 360sqm building in Grigor Street will be the new home of the Caloundra Men’s Shed.

And when construction and fit-out are completed in June, this much-needed meeting place – with its open-plan design on a double block ­– will be able to welcome twice the number of its current group of 60 members.

Those members are in good company as part of a movement that is more than 150,000 strong in almost 1000 locations around Australia.

Men’s Sheds not only keep idle hands busy, they also give men a greater sense of purpose than they may have been feeling, create friendships, foster conversations and discussions, offer valuable information about men’s health issues and develop newfound skills among members while giving back to the community.

The new Caloundra base will boast work stations for three lathes, metalwork and welding, small engines for pulling apart mowers and the like, a craft room for toymaking and larger timber household items and furniture, benches for drills and other tool work, plus a kitchen, office and pergola where members can chat over a cuppa.

President Phil Ashby is relieved the final phase is in sight, after multiple delays and hurdles including the weather, access to power and COVID-19 restrictions since planning work began 18 months ago.

“We probably didn’t get really stuck into it until towards the end of last year – October.

“The building may be finished probably mid-June and we’re looking at a couple of weeks to move over (from the current shed on the corner of Allen and Queen Sts).”

The Caloundra Men’s Shed’s future was assured when Sunshine Coast Council found members a more suitable and permanent block to lease and Federal Member for Fisher Andrew Wallace was instrumental in helping them secure a federal grant of $239,000.

Phil also acknowledged the efforts of “Harry the shed manager” who designed the building, committee secretary Ray Sanderson for his grant applications and letter writing, former president Jim Lombard – one of the Caloundra Men’s Shed founders, and council officers in the Property Department for their roles in bringing the new headquarters to fruition.

The security and peace of mind members now will enjoy follow several years of upheaval and changes of location since 2014.

Phil, himself, became a member about 2016, joining the diverse mix of members ­– from doctors and electrical engineers to tradies such as cabinetmakers and painters, as well as teachers.

He said whatever men are going through in their personal lives and no matter what health crisis they are facing, members are sympathetic and can offer practical advice because, chances are, they’ve been there themselves.

“I was in real estate and I got a bit of depression and anxiety and heard about the Men’s Shed and thought it would be a good thing,” he said.

“It’s mainly to keep the guys active, to give them a sense of worth. Some of the guys are quite happy just to come for a cup of tea ­­­– they’re on their own.

“They have a chat, hang around for an hour and then go home.

“We’ve had three blokes who said: ‘If it wasn’t for the Men’s Shed, we wouldn’t be here today’.”

While the majority of members are aged from age through to retirement, Phil says younger men are encouraged to attend and undertake personal projects or join in others such as making native bee hives, garden benches, doll’s cots and toy trucks for commercial and community use.

“Mental or physical health is not age-restrictive,” he said.

“At the end of the day, if someone can come in and they don’t know how to use the machinery, the guys are able to show them.

“We like to try to make sure we show them how to do things or instruct them while they’re doing it.

He agrees that making the initial contact to join the Men’s Shed is the hardest step. That’s why so many women are the instigators.

“Wives, daughters and granddaughters are always bringing their fathers, grandfathers or husbands to the shed,” Phil says.

“They (the men) may have just moved to the area and don’t know anyone.

“It’s normally 50/50 that it’s the women who make the first initial inquiry.

“We say a thick skin and sense of humour are only requirements for members.”