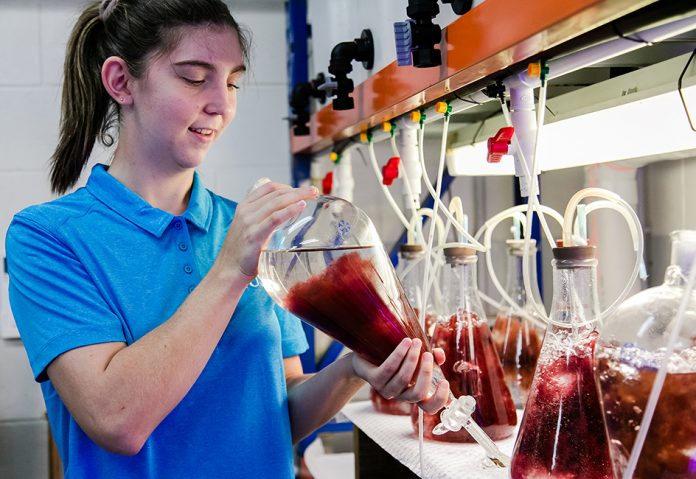 Scientists at the University of the Sunshine Coast in Australia have discovered how to quadruple the immune response of farmed fish.

The findings from a study, led by PhD candidate Valentin Thépot and supervised by Professor Nick Paul, Dr Alexandra Campbell and Dr Michael Rimmer from the USC Seaweed Research Group, were this week published in the scientific journal Fish and Shellfish Immunology.

The study found that a small amount of a pink seaweed called Asparagopsis, when added to the diet of rabbitfish, resulted in a four-fold improvement on their innate immune response. The same seaweed has been found to reduce methane emissions in cows.

“The seaweed quadrupled the immunity of the rabbitfish, meaning they were more likely to be resistant to pathogens down the track. We also showed that this seaweed is stronger than four immuno-stimulants currently used in aquaculture,” Mr Thépot said.

This means that a seaweed-based feed additive could one day replace the use of veterinary drugs or antibiotics in aquaculture that can be detrimental to the environment, to animals and even to us as consumers.”

Mr Thépot said disease costs the global aquaculture sector more than $US6 billion each year, with some industries entirely wiped out by outbreaks.

Of the 11 seaweeds that the team tested, two others proved promising: Dictyota, which doubled the fishes’ immune response, and Ulva, which almost did the same.

“There is no reason that this immuno-stimulant effect would be limited to just fish,” he said.

“It may be applicable to other agricultural industries, and different species of seaweed may offer other immune or production benefits. There is definitely scope for further research.”

Professor Paul said USC had patented the process for commercial use, confident in the enormous market potential for natural seaweed additives in Australia and across the world.

“While there is an abundant supply of Asparagopsis in the wild in Australia, the Pacific Islands and parts of Europe which has helped kickstart research and development, the wild harvest of seaweed for commercial purposes has its limitations,” Professor Paul said.

“There are already several companies in Australia interested in farming Asparagopsis commercially because it has been found to greatly reduce the methane emissions of cows and other ruminants when they eat it. This new discovery gives all the start-up aquaculture companies another market opportunity for the seaweed they produce.”

“It’s really exciting for USC to be leading this work on nature-based innovations for food production.

“The challenge now is to pinpoint the culture strategies that improve seaweed production so we can accelerate industry growth in Australia. We are doing this part of the work with genomics, funded by the Australian Research Council Discovery Program, to better understand the genes involved and select the best strains.”

USC’s Seaweed Research Group has previously helped establish seaweed industries in developing countries such as Indonesia and Samoa and expects the successes there could be replicated at scale in Australia and contribute to the country’s post-COVID economic recovery.

“Likewise, neighbouring countries are interested in evaluating whether Asparagopsis seaweed can be grown in their own waters,” Professor Paul said.

The project was partly supported by the Australian Centre for International Agricultural Research project on accelerating development of finfish mariculture.