'My determination has just grown': how netball has given Samina the focus to succeed 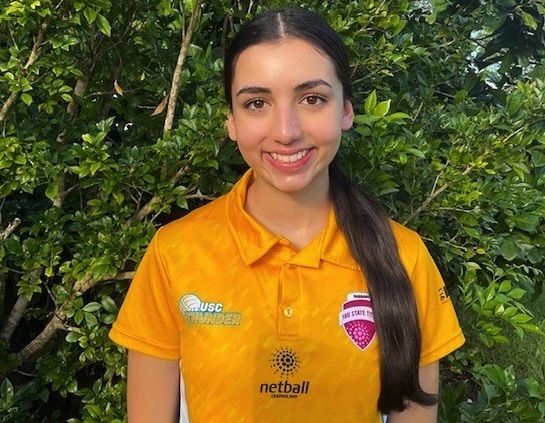 At the age of 17, Samina Reynolds may be just another first-year university student on the surface, but dig a little deeper, and she is revealed as a brainy, budding athlete and medical professional who has an admirable ability to juggle.

Completing Year 12 during a pandemic and getting an ATAR of 99.05 while playing her heart out in the USC Netball Academy is not for the half-hearted.

How has she developed these skills? Through a little game called netball.

“[I’ve played] since I was seven, so 10 years,” she said of the game she loves. “It’s definitely developed my personal skills I feel like I’ve become a more resilient person, and my determination has just grown.”

But not only has netball helped develop her personal attributes, but it’s also a healthy coping mechanism to release any pent-up stress she may have from whatever is going on in her life.

“It’s a good release,” Reynolds said. “You can kind of put all your energy and your focus into the game rather than your outside problems, other stressors, everything else, other distractions and just put your mind to this game.”

Reynolds has also achieved some great things in the decade she has played, from rep netball with Coolum to moving to the Sunshine Coast Netball Association in 2019.

“I was involved in the emerging talent program and I was selected into the USC Thunder under 16s team,” she said. “So, we competed at Nissan State titles, October of that year, and we got to play all the Brisbane teams and some of the regional teams that came down for that. And then I was selected to be part of USC Netball academy in 2020. And then I was reselected in 2021.”

Reynolds said the many progression and development pathways in netball give multiple shots at playing at elite levels. She said it’s motivating to see the development of a local pathway including the HART Sapphire series which can eventually feed into the Lightning team, which competes in the Suncorp Super Netball League – the stellar, pinnacle national competition.

No athlete finds success without support and guidance, and mentors often help a player to bridge the divide between raw talent and on-court success. It is said sport is played as much in the head and heart as on the field of play.

Reynolds said the guidance of mentors brought in via the USC Netball Academy had helped her immeasurably.

“They all bring their wealth of knowledge as well and shape you through this program,” she said.

The guidance and support truly comes from above, with long-time Diamonds team member and Lightning goal attack Steph Wood and former Firebird and new Lightning centre Mahalia Cassidy among those who guide and shape.

Netball’s rigorous structure and rules relies on teamwork. Players must rely on each other, must share the workload and a team can only find success when all players execute components of a game plan cohesively. But Reynolds said the best mentor’s advice she’d received encouraged individuality.

“We’re not all going to play the same,” she said. “Everyone has their own skill set they bring and shouldn’t be shaped to fit one mould. We can all utilise our own skills to bring out the best in our team.”

Netball is not Reynolds’s only love. She has begun a biomedical science degree at USC and hopes to become a doctor one day. Both her mother and grandmother were gynaecologists, so a passion for medicine and patient care is in her DNA. But it is also influenced by matters of the heart – specifically the health of her grandmother, who lives with her.

“She’s deteriorated over a while and my mum is a full time carer for her,” she said. “So seeing that and the challenges we’ve faced as a family drive my empathy and my passion to helping other people, and putting my skills and challenging myself to be my best so that I can help other people as well.”