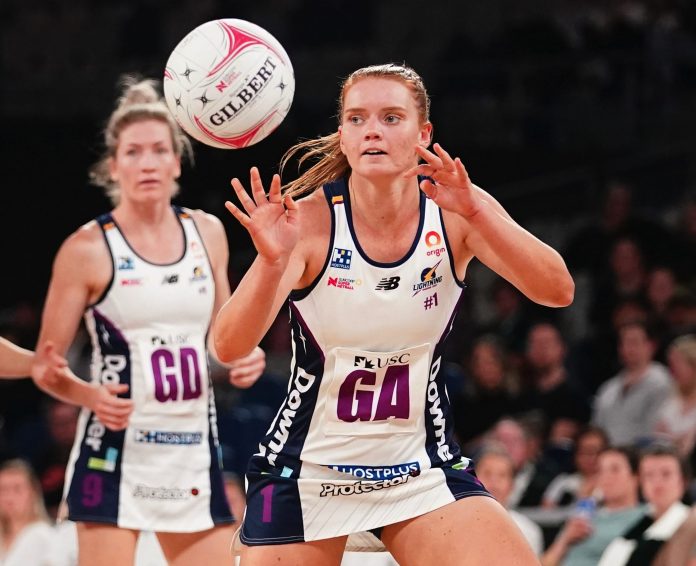 Sunshine Coast Lightning started their 2021 Super Netball campaign with an imposing victory, but still have plenty of room for improvement.

The two-time champions toppled Collingwood Magpies 67-56 in their season-opening clash in Melbourne on Saturday night.

Goal attack Steph Wood and wing attack Laura Scherian were in the thick of the action as the Lightning won all quarters and dominated possession (57%).

Vice-captain Wood hit 20 goals from 24 attempts, including 2 of 3 super shot efforts. She also had 20 assists and 29 feeds.

The club’s first foundation player said her team showed some promising signs but they can get significantly better.

“You don’t really know where you’re at until you come up against opposition once the season starts,” she told the Nine Network.

“It’s a great start for us but I think there plenty to work on and we’ll go away and hit (Melbourne) Vixens next week.”

Scherian was almost as busy with 22 assists, 29 feeds and in intercept.

Off-season recruits Mahalia Cassidy and Kate Shimmin looked good in their first games for the Lightning.

The latter celebrated her 100th national league game, after a lengthy career at the Adelaide Thunderbirds.

Cara Koenen, who was called up to the Australian Diamonds for the Constellation Cup during summer, completed 38 of 48 goal attempts.

The Lightning held a 17-16 quarter time lead and expanded their lead to 33-30 by half-time. They skipped clear by 11 goals in the third quarter and held a 54-46 lead after the third quarter, before going on with the job.

The Lightning have not missed the four-team finals of the eight-team competition in their short but successful history.

Their Round 2 clash against the Vixens is on May 9, 1pm.

Their first home game is in Round 3, against West Coast Fever on May 15, 7pm.