Your say: light rail, better connections and whatever happened to the CAMCOS proposal? 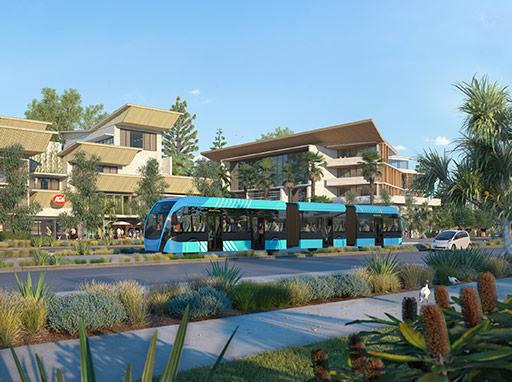 As a child, Jon Coghill wanted to grow up to be either music legend Michael Jackson or Star Wars character Luke Skywalker. He then fell More
More
Sport

One of the state's top horse racing venues is expected to bolster the industry for years to come, after an $8.9 million redevelopment. An all-weather More
More

The whole Coast needs to be connected

Thank you for keeping us informed of happenings on the Sunshine Coast, it’s vital that we have an independent news source especially with the “consultation” on mass transport and high density living.

It would seem our big lumbering and smelly buses are under-utilised and over time need to be replaced with a viable alternative.

I would suggest that smaller buses run on a more frequent schedule would probably attract more passengers.

Having a mass transport route along the Coast will not solve our congestion problems, we need to be able to connect people from all over the Coast with a viable alternative to a car and that would only happen if it was easy and frequent enough to be attractive.

I can envisage a scenario in the not-too-distant future where autonomous electric vehicles will be shuttling people to where they want to go.

A light rail system would become a very expensive white elephant and the high density hubs totally out of keeping with the lifestyle of the Sunny Coast.

We are told by the Council that our area will grow in population by 200,000. Why does that have to happen, surely we are reaching capacity now, or is this to appease the big developers with no thought to the existing population.

Better buses for the Coast

It would be good to have a better transport system as I have to catch three different buses to get to either rail station and I’m on Kawana Island, not in the country. This is hopeless if you need an early train and don’t want to leave a car there overnight.

I have used Sydney light rail often. It is easy, quiet and regular, which is why it is very popular.

The imperative for the Sunshine Coast is to get a system that people use. This involves spending money. The existing noisy, filthy buses must be taken off the road and replaced with a quiet, eco-friendly regular electric option.

Looking at the dollars involved in the options, wireless light rail would appear to be the obvious choice.

Let’s not go ‘Clive Palmer’ on this

Any Sunnycoaster who has been here longer than a minute will tell you that it no longer holds the magic it once had.

Like any beautiful place along the coastline of Australia, people just want to live here. This is fine but putting a cap on the population is the only way we can take a step back and see what all this development is doing to the area’s natural beauty.

We certainly don’t need a rail transport system like the Gold Coast. We just need to improve the bus and rail system that already exists and maybe go electric to pave the way for the future.

Please leave our nature strips and trees alone. It’s what gives us our unique natural landscape.

If we keep doing a ‘Clive Palmer’ on everything we will end up extinct … just like his dinosaurs!

What happened to the promised rail network?

“The train arriving at Maroochydore station on platform 2 is the express service to Brisbane. First stop Mooloolaba, then Kawana, Caloundra, Caloundra South, Beerwah then all stations to Caboolture.”

It’s a phrase that I hope to hear in my lifetime, but I’m afraid will not happen, due to inept successive governments failing to deliver on countless proposals, studies and announcements about a Sunshine Coast Rail network since the mid-1990s.

The original Caboolture to Maroochydore Corridor Study (CAMCOS) was a proposal in 1999 for a passenger train service for the Sunshine Coast, which would also provide travellers with a fast link to Brisbane.  It included an upgrade of the North Coast rail line from Caboolture to Landsborough and a new line from Beerwah to Maroochydore. Over 25 years later we are still talking about it without a single sleeper being layed towards Caloundra and Maroochydore.

In 2005, a $480 million project was announced by the Queensland Government, to boost northern rail services and provide the vital first link in the CAMCOS high speed service to the Sunshine Coast. It was launched by Transport and Main Roads Minister, Paul Lucas. He said the project would give the green light to the Beattie Government’s commitment of a high speed rail service between Brisbane, Caloundra and Maroochydore. He also said, “We will establish the line from Beerwah to Caloundra by 2015, and up the coast to Maroochydore by 2020, bringing rail to the Sunshine Coast.”

Light rail needs higher-density development along the transport corridor to be sustainable. No people, no passengers. Simple mathematics. If light rail goes ahead, of course there will be high-rise developments around it. This is not what we need on the Coast and it is not what the community wants. With the disruption to residents and business, light rail will cost too much and severely impact on our way of life for little benefit.

What we do need is heavy rail connecting us to Brisbane, with train stations at Maroochydore, Kawana, Caloundra and Caloundra South, then on to Brisbane. The CAMCOS corridor exists, and studies been done which suggest this is the best way forward. CAMCOS has been talked about by successive governments for decades and little has been done. Now is the time to get it done and do it properly!

Light rail is an absolute waste of money. Look at the proposed routes, the cost will be billions and interrupt the lifestyle for many residents and businesses on the coast, for many years. We simply cannot afford such a proposal. Our local council, state or federal government, just don’t have the money. It’s pie in the sky stuff, to appease developers, architects and urban planners.

Heavy Rail is a real solution to ease Bruce Highway traffic also. Light rail may be okay for the Gold Coast and Sydney where there are greater population numbers in high-rise developments, but not the Sunshine Coast.

Here’s another option. Extend the North Coast Rail Network and connect heavy rail from Landsborough, Caloundra South, Caloundra, Kawana, Maroochydore, and back out to Woombye. With the new Maroochydore CBD, the perfect time is now to develop a Maroochydore train station. Then increase train services between Gympie and Caboolture for real change.

Plan for the future, not just help tourists get around while they are here in pretty trams. We already have a bus network that works fine. Light rail is basically reinventing the wheel, trying to replace bus services which are already in place.

The fact that Heavy Rail is not one of five key mass transit options in the Sunshine Council’s Mass Transit Options Analysis Paper shows the bias.