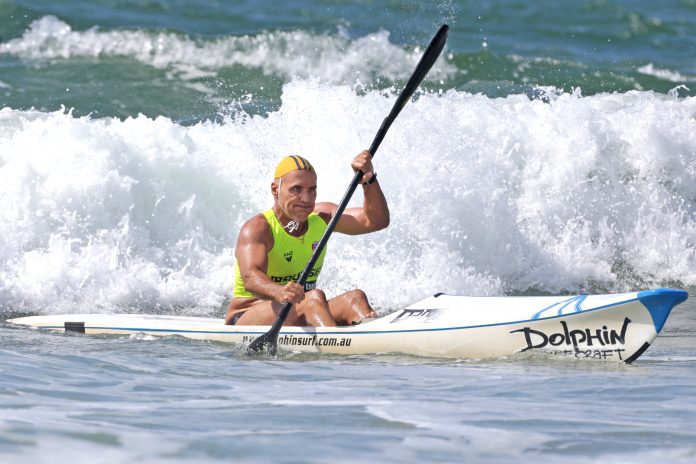 There was a blast from the past on Sunday when some of Australia’s lifesaving legends took to the sand and surf for the national masters championships.

Hometown icon Grant Kenny returned to Maroochydore beach – the scene of his famous double ironman victory of 1980 – to compete in the 55-59 years division.

He placed fifth in the ski race, behind Alexandra Headland club-mate Jeff Lemarseny, before combining with his good friend to win the board rescue.

His attendance alone at this week’s carnival is great for the sport, according to Alex Surf Club general manager Ashley Robinson.

“He’s got a presence about him,” he said.

“When the masters ironman race was on, there was an Alex surf cap leading and a lot of people said ‘that will be Grant Kenny’.

Kenny won open ironman crown while competing as a 16-year-old, moments after winning the junior final.

His efforts helped put the sport in the spotlight and he essentially became the best known surf lifesaver, winning the ironman title from 1980-1983 and the ski title from 1981-1989.

He also won the Molokai to Oahu ski race five times and an Olympic bronze medal in kayaking at the 1984 Los Angeles Games.

“That was a pretty big day in 1980, because it changed the landscape of surf sports,” Mr Robinson said.

“He put lifesaving on the map and continued on.

“He was basically the one who got the sport started on a professional basis (as a co-founder of summer ironman circuit).

Robinson said Kenny was modest, down to earth and provided a friendly face around the club.

“If someone needs to unload a trailer or fix a ski or a cable and Grant is there, he’ll be the first one to do it.”

And the 57-year-old is still a quick paddler.

“He turned up to training with a Hayden ski from the 70s – he bought it from someone who got it from the dump shop – and he was beating some of the 18-year-olds,” Robinson said.

“On his ski he holds his own with most of the young blokes.”

Kenny wasn’t the only big name in the sport to compete at the Australian Masters Surf Life Saving Championships.

Guy Andrews, Kristy Munroe and Darren Mercer were just some of the former champions in action.

Noosa Heads’ Mercer finished second in the 50-54 years board race.

“It’s so good to have a local Aussies, they’re few and far between,” he said.

“I really enjoy it (competing), even after going around all those years ago.

“My mum and dad John and Maureen are here to watch and they love it. It’s a great atmosphere and a great venue.

“We’ve got a good bunch of masters (from Noosa Heads) who all train together to have fun and keep fit.”

Mercer, a successful coach at Noosa Heads, is set to compete with his daughter, 2016 Ironwoman Series winner Jordan, in the open mixed double ski during the week.

The masters were scheduled to compete on Sunday and Monday.

The oldest competitor is William Ryan, 86, of Coolangatta.

Selected results from the masters championships, Ironman and Ironwoman