Beaches pounded after copping low blow, but ‘the Aussies’ are good to go

Beaches pounded after copping low blow, but ‘the Aussies’ are good to go 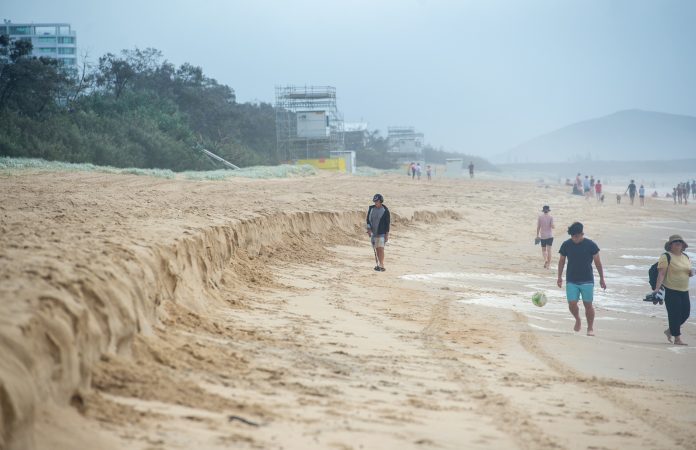 All bar one apartment within the Market Lane residential project at the new Maroochydore CBD are sold, and one purchaser has the chance to More
More

The Sunshine Coast is all set to host one of the nation’s most prized – and spectacular events – after “dodging a bullet” in recent days.

The nine-day Australian Surf Life Saving Championships, expected to attract about 6000 competitors and inject millions of dollars into the economy, will be held from April 16-24.

It faced a serious, last-minute threat, however, when a powerful low swept past the coastline, generating strong winds and big seas that have torn away at the host beaches of Maroochydore, Alexandra Headland and Mooloolaba.

“But generally speaking, I think we’ve dodged a bullet.

“I’m optimistic that, with a bit of re-scheduling, The Aussies will be held here and will be a success.”

Maroochydore is set to host the surf events.

Devlin said the club was prepared to make alterations to the schedule if necessary.

Events which required transition zones, like ironman, ironwoman, board and ski relays, could be held when convenient with regard to tides.

“I would expect once everything calms down, some of the sand will have time to move back in,” he said.

“(But) where they need a wider beach, they will schedule for low tide.

“In low tide, it’s wide and good for four or five hours a day.

He said event installations, including a two-storey tower, are well clear of the tide and in “good shape”.

Devlin said the beach had been “benched a bit” by the conditions.

However, he said the damage was not as great as he would have expected.

“When you go back to the grass sand hills they’re all in really good shape. I think there’s a level of confidence that we will be all right.”

He said there would be some sections of the beach between Maroochydore and Alexandra Headland that could need some work, if necessary.

“There will inevitably be one or two pockets where rocks will be exposed. In those places they’ve made provisions for sand, at the right moment, to be graded in to cover those areas,” Mr Devlin said.

Alexandra Headland will host the surfboat and rescue events.

“They will need some beach to compete on, for the champion lifesaver and patrol competitions, but they’ll be able to do it.”

The surfboats will compete slightly north of the clubhouse.

The stretch of sand from Maroochydore towards Alexandra Headland has been fortified in recent months with sand dredged from the Maroochy River.

But Mr Robinson said events could be much better at Alexandra Headland, if they had more sand.

“It would be lovely if we could get some sand like Maroochydore,” he said.

“We would love to host (big) water events at some stage, but we never seem to be able to get them.

“And it would be nice if we could get the surfboats closer to the clubhouse, but we’re prevented by coffee rock.”

“Ideally, the surfboats would be in front of the clubhouse, where it would be great for spectators who have elevation.”

Mooloolaba, with its relatively protected bay, will host the beach events.

A Sunshine Coast Council spokesperson said beaches have fared well after the weekend weather, with “very limited erosion at Maroochydore and Mooloolaba beaches”.

“Council crews inspected the beaches on Sunday and determined that there will need to be a small amount of re-profiling work required during the week.”

Council also said there are no plans to renourish the section of beach in front of the Alexandra Headland Surf Club and the existing seawall, “due to the speed at which the sand would erode”.

“The section of beach to the south of the surf club is already able to hold large scale events, such as the SCX 2020 Jet Sport and Boating Association event in February this year and the Interstate SLS Championships in January 2020.”

The Aussies was scheduled for the Gold Coast last year, but it was cancelled due to COVID-19.

Participants from 314 clubs will compete in more than 480 events at this year’s edition, which has a COVID safe plan.

There will be open, youth and masters surf sports events as well as board riding, lifesaving, surfboats and ocean swim races.

The week-long festival of surf sports will commence with the youth competition on April 16-17, followed by Masters on April 18-19.

Opens events will run from April 20-24, with boardriding, surfboats and lifesaving disciplines to be held over the duration of the competition.

The Aussie Ocean Swim will be held over two days this year with the masters on April 16 and youth and opens on April 17 and is an opportunity for the general public to be a part of the largest surf lifesaving event in the world.

The beach events at Mooloolaba are set to be held under lights, enabling people at the other day events to watch the action at night.

Some beach events were held under lights at Mooloolaba last time the Australian championships were on the Sunshine Coast in 2016, with much success.

April 16, Time TBC: U14 and U115 ironman and ironwoman finals at Maroochydore

April 17, 8am: Ocean swim at Mooloolaba

April 20, 8am: Open ironwoman and ironman heats at Maroochydore