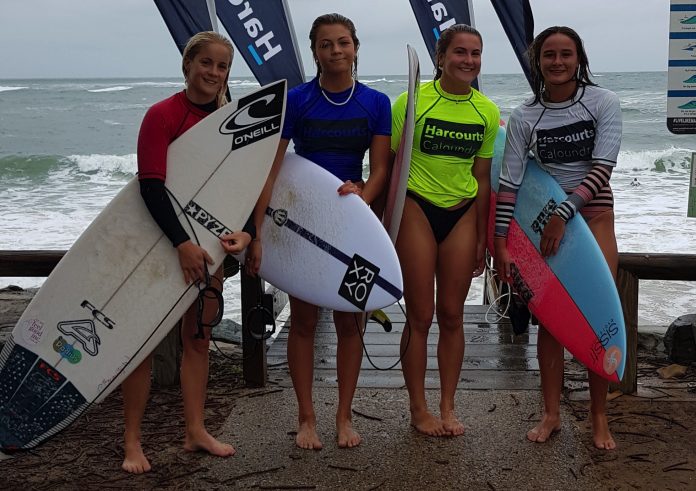 Powerful waves and bold boardriding were the highlights of the long-standing Pa and Ma Bendall Memorial Contest over the Easter weekend.

The event’s 47th edition was held in testing conditions, including wind, rain and 1.5m plus  surf.

About 75 competitors took to the waves across several divisions at Moffat Beach.

It’s believed to be the second-longest running surfing competition in Australia, behind the Bells Beach Classic (60 years).

Club president Terry Landsberg said: “it was a great weekend.”

“We had the jet-ski assist us on Sunday because the conditions were quite difficult for the finalists, but it was wonderful.

“The performance level of the divisions was awesome in the conditions.”

The surf was whipped up by a trough up the coast.

“It was really quite chunky, and we had the wind and rain squalls coming through,” Landsberg said.

“It was really tough on our judges, especially from the tower, when the conditions were changing a lot during the day.

“Moffat changes a lot in the tidal conditions, so it was very testing.”

It made for some great competition and thrilling surfing.

“There was always something happening, a lot of action,” Landsberg said.

And as the open age competitors battled each other and the elements on the larger waves ‘out the back’, the grommets and free surfers carved up on the shore break.

“He’s been coming to Pa and Ma Bendall for so long and it’s great to see him get that success,” Landsberg said.

“Just about every year he gets knocked out in the heats and this year he’s brought it home.”

Ewing’s ability in bigger waves was on show.

“He’s an extremely powerful surfer and that’s a lot of the basis of the Stradbroke Island boys,” Landsberg said.

“The island boys have a lot of experience in much heavier conditions at Straddy, where the surf break picks up much more swell than we see here on the coast.

“It was her commitment so some of the bigger sections of the waves,” Landsberg said.

“The open women, and Sophie in particular, really attacked the waves with a lot of aggression.

“It was a really good proving ground for the girls and I’m sure we’ll see a lot more of Sophie in the future.”

McCulloch is an emerging talent on the Australian surfing scene.

She has claimed two runner-up results and a fifth placing in three world Qualifying Series events this year, and was ninth in the Sydney Surf Pro last year.

There were also legends, masters, cadets and juniors divisions at Moffat Beach.

The club celebrated another successful running of the event with a presentation night.

It’s hoped WindanSea will have a clubhouse this time next year.

They were approved to build at the end of Buderim St after a protracted court battle with nearby residents, who opposed construction.

We’re good to go and hopefully we’ll be building by the end of the year.”