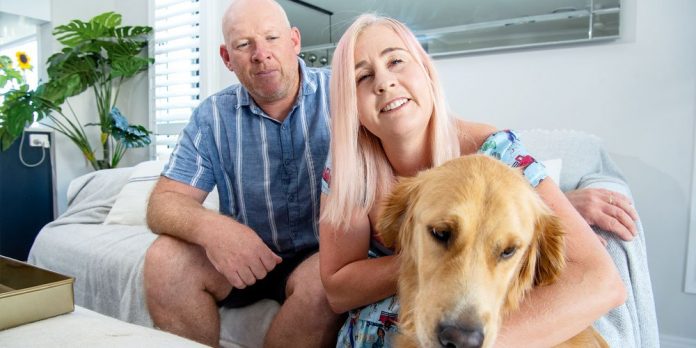 Nicole Forbes-Hood has never let a vision impairment stop her living a “normal” life as she strives to put the ability back into disability daily.

Born with a rare genetic condition known as aniridia, Ms Forbes-Hood grew up challenging the perceptions of her limited vision, something she now advocates for her two teenage children.

“I was the first one in my family to have aniridia and my parents always brought me up to be as independent as possible and not let it stop me,” she says.

“I’ve led a pretty normal life. I haven’t been able to drive but have always got around on public transport or with the help of family and friends.”

“I want to set a good example for them to get out there and give anything a go.

“My daughter pushes those perception boundaries. She is an air cadet and she is a life saver at Kings Beach.”

Ms Forbes-Hood describes her vision like “looking through a foggy window” and says her condition has deteriorated in the past five years.

Forced to take a redundancy after unsuccessful eye surgery two years ago, Ms Forbes-Hood says ending a career in finance and superannuation left her feeling like she lost a part of her identity.

“Having to give up work was really tough on me. It was always like having to find my own identity again in some ways.

“We were building our house here in Aura so there were some positive things to focus on but there were times it was really tough.”

In 2020 her focus soon shifted to training for a charity hike up Mount Kilimanjaro for Guide Dogs.

With that event cancelled, she is now training for a seven-day charity trek through the rugged Larapinta Trail near Alice Springs this May.

“Larapinta is known as one of Australia’s premier walking trails and is quite renowned for its ruggedness and its very rocky and steep conditions,” she says.

“Also being in the Northern Territory you are exposed to extreme weather conditions and the sun.”

Ms Forbes-Hood says the 63.3-kilomtere trek will be physically and mentally challenging.

“It’s a pretty tough trek for anyone but someone who is legally blind with only a small amount of functional vision and pretty much no depth perception, I know that it is going to be a really tough challenge for me and I’m going to have to dig deep and use all of my senses.”

Ms Forbes-Hood’s husband, Manaia, will act as a guide.

“I wouldn’t be able to do this trek without a support person,” she says. “He hasn’t done anything quite like this either so he will definitely be out of his comfort zone as well.

To prepare, Ms Forbes-Hood is working with a personal trainer, doing Pilates and walking Noosa National Park or Mount Ngungun to familiarise herself with a rocky underfoot.

She says her confidence is also improving since receiving her own sight dog, Oskar, nine months ago.

“He has given me that independence and confidence back.”

Ms Forbes-Hood’s fundraising goal is $3500 but she says to breed, raise and train one guide dog alone can cost up to $50,000. To help her cause visit guide-dogs-qld-kili-2021.raisely.com/nicole-forbes-hood.