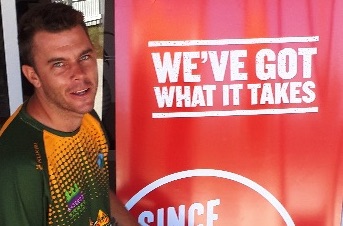 The 38-year-old, who has been involved with the club for the past two decades, believes the Rangers are in a great position to win this year’s title after finishing the eight-team regular season on top of the ladder.

The last time they were minor premiers they went on to win their only premiership in 1984/1985, so there is plenty of hype within the camp.

“We’re excited we finished on top of the ladder. It’s a good achievement for our club but we want to win the premiership, that’s our main focus,” Schultz said.

“We’ve been building for this for a few seasons.”

“This is what we’ve been aiming for, for a little while and we’re playing good cricket.”

Glasshouse won six games and had a draw in their seven two-day matches the home-and-away schedule, while also faring well in the shorter formats.

While the Rangers have been threats in recent seasons, their rise to the top of the ladder this time around is largely due to an improvement in their batting.

“It had been our achilles heel for a while (in previous seasons) … but we seem to be batting better now,” Schultz said.

“And our bowling unit has been excellent for a number of years and they continue to be excellent.”

Steve Heise has claimed 26 wickets at an average of just 13 while Heath Fisher has 18 scalps at 16.

“We’re very confident of bowling sides out and our batsmen are finally starting to score some runs to back them up,” Schultz said.

A commitment to player development has helped the Brent Lunt-coached side.

“We’ve trained hard and we put plans in place three or four years ago to try and get better and we’re starting to see the rewards.”

Such is their depth, their Division 2 side is also a title threat this season.

“The hard work is paying off,” Schultz said.

The Rangers will collide with fourth-placed Caboolture Snakes this weekend, on Saturday and Sunday. A draw will suffice for the Rangers to progress to the three-day decider.

Unlike the Rangers, the Snakes have won plenty of silverware during the past couple of decades.

Second-placed Maroochydore will host third-placed Noosa-Tewantin in the other semi-final.