'You have to believe': how Wendy Barnes tackled cancer by treating it like a triathlon 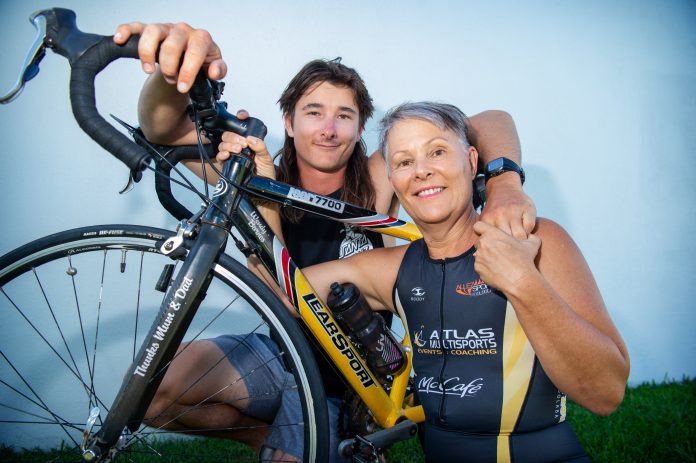 As far as lucky numbers go, it seems 13 is the winner for Mooloolaba’s Wendy Barnes as she prepares to fulfill a dream met with its fair share of battles.

Fearing breast cancer would rob her of life and the chance to compete in the Mooloolaba triathlon, the inspirational 55-year-old is in her final stage of preparation to chase her own personal victory.

Wendy moved to the Coast from Adelaide 13 years ago with her husband Trevor and three children Hayley, Tayla and Riley before she received a devastating diagnosis.

“We arrived in the January and I started training,” Wendy said.

“I did a few tris for the masters in South Australia, I had always kept fit.

“In the June I got diagnosed with breast cancer. We were really gobsmacked.

Wendy underwent a lumpectomy, 12 rounds of chemotherapy and radiation and had all 24 lymph nodes removed from her left arm.

“I treated all of my chemo like a triathlon,” she said.

“I thought right, that’s one leg down, I’ve done that swim leg and now I’ve got the bike leg.”

Wendy said the treatment was just as difficult on her young family as it was on her.

“That was hard for my husband and three kids. They were only 15, 13 and seven at the time.”

After treatment, Wendy began training and participating in charity triathlons and raised money for breast cancer.

“In 2011 I did the breast cancer tri with my two daughters and a girlfriend; I did the bike leg.

That same year she raised $10,000 and took part in the Rio Tinto Ride To Conquer Cancer, a 260-kilometre return trip from Brisbane to Wivenhoe.

It was then at her five-year check-up in 2013 Wendy received the news no one wanted to hear.

“I got diagnosed again. That was really hard,” she said.

“I went straight in and I had a double mastectomy and had to have chemo again.

“It was very hard going through that the second time; you know what to expect.” 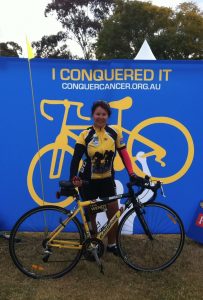 Wendy said during that second diagnosis she feared she would lose her battle and wrote a letter to each of her children, something she told sunshinecoastnew.com.au was a very traumatic experience.

Thirteen years since her first diagnosis, and with a newfound passion for life, Wendy began training for the 2021 Mooloolaba Triathlon in December last year.

“For 13 years it’s always been in the back of my head that I’d always wanted to do [the Mooloolaba Triathlon],” Wendy said.

“Now I’ve got my third chance at life so I’m living it.”

Wendy has been part of the Mooloolaba Beach Bums swim club for four years and swims every day, rain, winter or shine.

She has also been incorporating running to and from swim training throughout the week but admitted the high impact was difficult on her joints after chemotherapy.

However, she has a very special connection to her bike.

“When I turned 39, I decided to do a triathlon. It was at Port Pirie and I actually won that one,” Wendy said.

“Mum and dad helped me pay half for my beautiful bike, which I’ve got my name on and it says, ‘Love mum and dad’, which is very special because my dad recently passed away.”

This time round, Wendy’s now 21-year-old son Riley will also take part in the March 13 event to support his mother.

“I told Riley I was going to do the triathlon and he said: ‘Mum, I love you, I want to do it with you and for you and I am so grateful I’ve got a mum’.

Post triathlon, Wendy hopes to help others on their cancer journey.

“I would like to, down the track, do some speaking and help other people,” she said.

“I help with Cancer Council Connect and do phone calls for people who are wondering about whether to have a double mastectomy and questions that they don’t know to ask their doctors.”

Like stories about inspirational Sunshine Coast people? Help us deliver more by subscribing to our free daily news feed: Go to SUBSCRIBE at top of this article to register

Now in her mid-50s, Wendy said she loved every grey hair and wrinkle because it meant she had lived.

“Age is a beautiful thing because it shows that we’re living and we’re alive.

“I love my body and love my scars because I’m alive.”

The event on March 13 is 13 years after moving to Queensland and 13 years since her first cancer diagnosis. Wendy recovered from her second diagnosis in 2013 and lives at house number 13 in her street.

Wendy is hoping lucky number 13 has finally aligned for her to fulfil her dream but admitted the 750-metre swim, 20-kilometre cycle and five-kilometre run event would be her last triathlon.

“People are telling me I’ll have to come 13th but I just want to finish it.

“I’ll keep up with my swimming and cycling but this is the last triathlon.”

“As I have always said, what the mind believes, the body achieves.”