Almost 30,000 Australians have been vaccinated during the past week 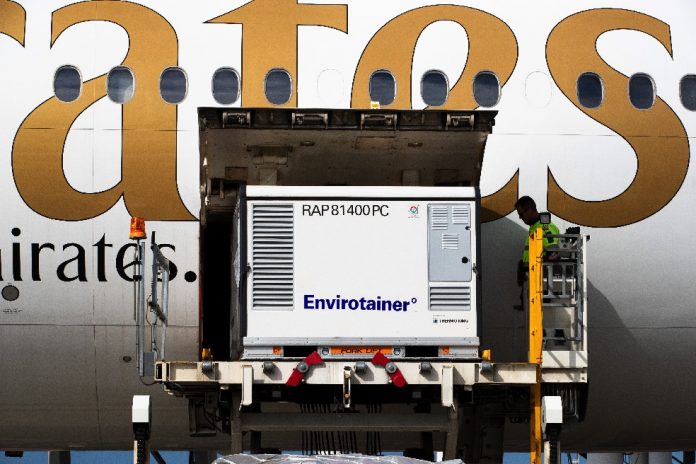 Australians may not receive their first COVID-19 jab by the end of October as initially planned, with the federal government advising those under 50 More
More
News

Leaders from across Australia will meet to draft a national plan to improve women's safety in July, as calls for better funding for frontline More
More
News

Economists expect the Reserve Bank will keep its interest-rate settings steady, although will be keen to hear its views on housing, which is experiencing More
More

The first shipment of the COVID-19 vaccine that most Australians will receive has arrived in Sydney, with Prime Minister Scott Morrison hailing a new milestone in the fight against the virus.

The first 300,000 doses of AstraZeneca coronavirus vaccine landed from overseas on Sunday, but 50 million doses of this type will be manufactured by CSL in Australia.

“This is the next step as we ramp up the vaccine rollout,”Mr Morrison said.

The rollout of the AstraZeneca vaccine is due to commence from March 8, subject to the TGA’s testing process.

“Australia is in a unique position because importantly this vaccine gives us the ability to manufacture onshore’ Mr Morrison said.

“Every Australian who wishes to be vaccinated will be able to receive a vaccine this year.”
Australia started its vaccine program last week with the first injections of the Pfizer vaccine.

Almost 30,000 Australians had been vaccinated since last Monday, including 8110 aged care and disability residents throughout 117 care facilities.

Ms Berejiklian told reporters state leaders are still unsure of how and when the general population will get access to a vaccine.

“I’ve made no secret of the fact… that we would appreciate as much information in a timely way, but we also appreciate that’s not always possible,” she told reporters.

The federal government is rolling out a second $31 million public information campaign on the COVID-19 vaccination program from Sunday.

Health Minister Greg Hunt said both the state and territory teams, alongside the aged care in-reach teams, are ramping up their operations, with more vaccines being distributed across the country in the next week.

“The advertising is important, so people understand how the vaccination program is operating, how they can find out when it will be their turn and answer any questions they have about the vaccines,” Mr Hunt said.

He said a myth busting unit has also been quietly set up within Home Affairs in cooperation with the Health Department to stamp out information that is “plainly ridiculous”, like 5G theories.

“We don’t want to give too much air to some of the silliest ideas but we do want to provide public reassurance to combat in the marketplace on those ideas which would in any way falsely have some impact on public confidence,” Mr Hunt said.

Meanwhile, the Chief Medical Officer Paul Kelly has put in place a so-called a hotspot definition for the Auckland region, which will be reviewed every 72 hours.

The rest of New Zealand can continue to fly to Australia without the need for a 14 day quarantine.

There were no new virus cases reported across Australia on Sunday.

A doctor and the chief executive of the company that hired him were stood aside when two people at a Brisbane aged care facility were given more than the required doses of the Pfizer vaccine earlier this week.

And on Friday, as many as 150 doses of the vaccine had to be disposed of, after problems were discovered with their storage at a Melbourne aged care home.

Contractor Aspen Medical reported the issue to federal authorities after being unable to confirm storage temperatures.

The Pfizer vaccine has six doses per vial and is stored at minus 70 degrees Celsius.

Logistics company DHL is transporting the doses across the country in portable freezers.
Mr Morrison says logistical issues in the early phase of the rollout will be addressed quickly.

“I’m absolutely confident that as we go from day to day, the lessons of each day will only make the system better,” he told reporters in Sydney on Friday.

“At all times, safety is the paramount issue.”

Foreign Minister Marise Payne became among the first to receive the vaccine on Saturday, in a bid to boost public confidence in it.

Australia’s chief medical officer, chief nursing and midwifery officer and personnel from the Australian Defence Force and Australian Border Force have also been vaccinated during the past week.

The government is aiming to vaccinate the nation by October over five phases, starting with quarantine and border workers, frontline healthcare workers, and aged care and disability staff and residents.

The 88-year-old and 94-year-old patients who received too much vaccine in Brisbane have so far shown no signs of adverse reactions.

However, medical contractor Healthcare Australia – which is in charge of the Queensland aged care vaccine rollout – is on notice its contract could be torn up if there are any more major problems.

Mr Morrison flagged that Pfizer was looking at changes to the vaccine’s storage temperature, which is being considered by the TGA.

State health authorities confirmed the two cases are close contacts of pre-existing cases and have been in quarantine during their infectious period.

South Australia and Queensland have now reopened to Melbourne visitors without restriction.

There is a ditch between us, but Australia and New Zealand are bonded and bound. Trade, tourists, a language – kind of – as well More
More
National

Australia has abandoned meeting a fixed timeline for its COVID-19 vaccination rollout. An initial target of October has proven unachievable due partly to dosage import More
More