A plan to transform Mooloolaba's foreshore has hit a rock wall 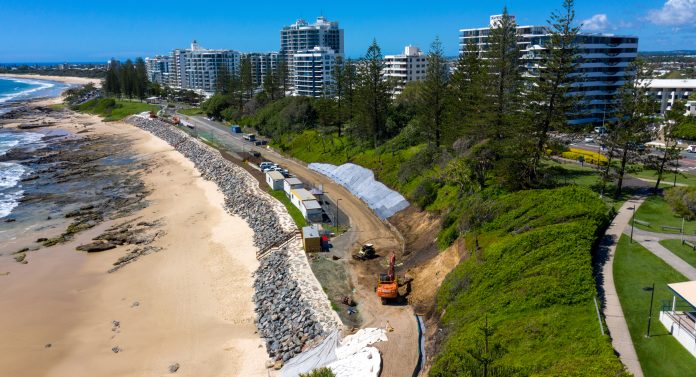 The Sunshine Coast's big day out for tourism operators was held at Twin Waters, with 100 local experiences, tours and attractions setting up information More
More
Local

After a successful campaign at Point Cartwright, a pet education campaign will be expanded to other popular dog locations as officers reveal some owners More
More
Local

As Queenslanders rally and unite to mark Domestic and Family Violence Awareness month, Sunshine Coast residents are invited to join in a march and More
More

The transformation of Mooloolaba’s foreshore with parks, paths and waterfront dining has hit a rock wall, but critics have been urged not to make a final judgement on the project until construction is finished.

The Mooloolaba Foreshore Revitalisation Project aims to make the most of the prized beachfront which for decades has been underutilised as a carpark and caravan park.

It includes revamping a 1km coastal stretch with 40 per cent more parks, extensive pathways and upgraded amenities for enjoying the outdoors.

But as Stage 1 of the project takes shape, many residents are unhappy with a 295m rocky seawall which has been built at the northern end of the precinct.

Stage 1, which is costing $11million and is called the Northern Parkland, is on track for completion within months, in mid-2021.

It includes an expanse of green space for picnics, weddings and entertainment, waterfront footpaths to Alexandra Headland with views over the sea, and a viewing platform.

The parkland will meet the top of the seawall with landscaped gardens and paths.

Construction of the seawall which began late last year has occurred during a period of intense storms which caused major erosion up and down the Coast.

Mooloolaba Chamber of Commerce president Graeme Juniper said the visual look of the rock wall had “created quite a negative reaction in the community”.

“I haven’t found anyone yet who likes it,” he said.

“It was a lovely beach area with palms and now we’ll have to wait and see how it comes up.”

Mr Juniper said council’s original design released to the community did not show that such a large structure would stretch up the beach.

“They didn’t give away any of this on the plans. The devil is in the detail. It is a shock to lose so much beach,” he said.

Mr Juniper said local people had been happy with the existing foreshore and were worried about losing 150 carparks just as more tourists were expected to flock to the area.

However, he said residents should wait to “see how it comes up” before cementing their opinions.

The new seawall replaces a smaller old one which was covered in exotic weed and was meant to protect the former holiday park area.

A Sunshine Coast Council spokesperson said the new seawall would “protect our treasured new northern parklands for generations to come”.

“It has been designed to withstand a 1 in 50-year storm event and allow for the effects of climate change and rising sea levels and has already proved its worth during the January storm event which caused property destruction across the region,” the spokesperson said.

“Landscaping above the seawall will soften the seawall’s appearance as native species establish, along with regeneration occurring naturally in the seawall cavities.”

The spokesperson said the new seawall’s shape and slope would help reduce the loss of beach sand by dissipating wave energy upwards over the rocks, rather than back down into the sand.

“The old seawall was in place for many decades and had collapsed over time. Its structure included old concrete and pipes covered mainly with the declared invasive weed Singapore Daisy which had to be removed for environmental purposes.

“The artist impressions of the foreshore made use of existing aerial images which showed natural sand replenishment over many decades coupled with Singapore Daisy partially disguising the old rock seawall now being replaced.

“Beaches are naturally and typically erode in summer, due to large swells, high water levels and storm events followed by sand replenishment over the winter months which will result in partial coverage of the wall.”

As the sea barrier nears completion, work will soon start on a boardwalk extending to Alexandra Headland Bluff and a viewing platform with seats.

“The new viewing platform at the northern end of the boardwalk will be an ideal spot for whale watching,” council’s latest update said.

“A new stair link from Mooloolaba Esplanade, near the existing outdoor gym, will provide another access down to the parkland and beach.”

Area Councillor Joe Natoli said later stages of the revitalisation project could include a major playground by the beach which would draw more families to the area.

The council was also exploring a dining venue close to the water of a similar vein to Noosa Boathouse on the Noosa River.

Cr Natoli urged people to wait until Stage 1 was completed before casting their final judgement on the project.

“The seawall is not going to go away. The project will go ahead and once it’s completed people can see for themselves,” he said.

“There are issues with the way council has communicated with the public regarding the project because it was not on the original plans.

“I think people have to hold back their judgement until they see it.”

Cr Natoli said it was not the first time the community had been upset with improvements to the area but eventually their views had changed.

“I remember when people complained about bringing in outdoor dining and losing carparks and people were marching in the streets,” he said.

He said destructive storm swells in recent months had exacerbated erosion around the sea wall but the beach would recover.

“That area goes through circumstances all the time and it renews quickly and can be eroded quickly,” Cr Natoli said.

“Sand comes and goes and coffee rock is exposed and no doubt the sand will recover.”

The next phase of Stage 1 will begin with the installation of retaining walls and concrete footings for the new boardwalk and stairs.

Council said to create the boardwalk and stair link, a small amount of vegetation would be removed.

“Offset planting will replace any vegetation removed and additional trees and plants forms a strong part of the landscaping design for the project,” a council update states.

“In fact, the completed project will see extensive new planting and landscaping with almost 50 new trees and more than 1000 plants incorporated as part of the project.”

Stay up-to-date with updates on the Mooloolaba Foreshore Revitalisation page.

Helicopter water bombing, firefighters in action and 'crash scene rescues' will be among the demonstrations at this month's Emergency Services and Disaster Preparedness Expo. The More
More
Local

How to ‘Lift’ your health as popular program extended

A free wellbeing program has been extended for Sunshine Coast residents, due to its popularity. Sunshine Coast Council presents the fourth and final round of More
More