Yandina claims another cricket title in a thriller

Yandina claims another cricket title in a thriller 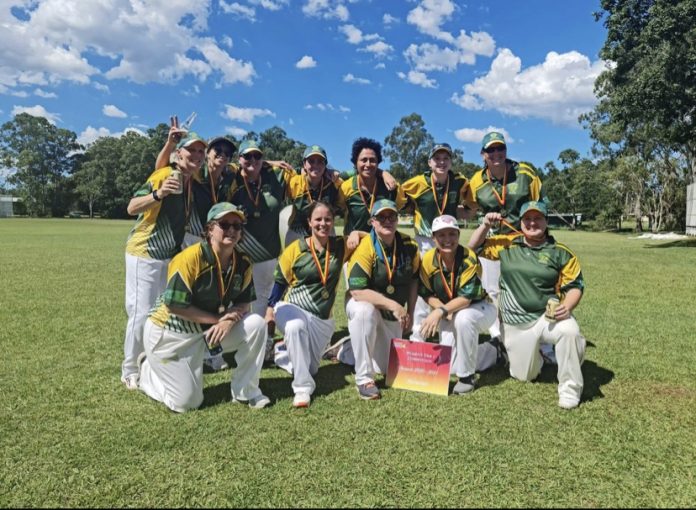 Retiring Yandina captain Kerryn Matthews has praised her team for claiming back-to-back titles in the Sunshine Coast Tier 1 competition, after fearing they would lose the final.

The minor premiers Pioneers defeated Caboolture by just three runs on their home field on Sunday, to cap an impressive campaign.

“It was pretty exciting to finish the season like that,” Matthews said after they clinched the last wicket in the penultimate over of the 30-over-a-side match.

Matthews, who is hanging up the bat after leading the team to consecutive titles, said her team had bonded well this season.

“We all like each other and that helps,” she said.

“We’re all very encouraging to each other, we get along and we’re there for fun.

“Winning is nice but we’re all there to have a good game of cricket.”

The Pioneers’ depth was crucial to winning the six-team Tier 1 competition.

“Everyone contributed to the team,” Matthews said.

“There wasn’t one person who dominated during the season.

“That is probably the biggest reason why we so many games (8 of 10 contested matches).”

The final was hair-raising though and Matthews had feared they were going to lose.

“I didn’t think we had enough and then they started (the chase) well and, although I didn’t say it to my team-mates, I was thinking ‘I don’t think we can do this.”

“But we just kept fighting.

“We (senior players) said to the girls ‘don’t give up’ because it could only take a couple of wickets.

“And that’s exactly what happened.”

The Snakes were 1/55 before Mari Hart claimed the breakthrough wicket of April-Rose Liddell (28) and the Pioneers went on a wicket-taking spree, at one stage claiming 5/15 in the middle order.

Matthews also believed their opponents might could have got caught up in the hype of the decider.

“It always pressure-filled when you chase runs in a grand final and I think the pressure got to them a bit in the end,” she said.

“We just kept putting the ball on the spot and then there was pressure with dot balls.”

The make-up of the Pioneers team was slightly different to last year’s triumphant line-up.

They were without gun player Loiuse Haycock, due to work commitments this season.

Lauren Ford, who starred in the decider with 28 runs and 4 wickets, was absent for chunks of the campaign because of injuries.

“So, we had to dig deep without them through the season and that was pleasing, that other people stood up and we got the job done.”

Matthews believed Yandina could press on during the next couple of years.

“I have faith the girls can keep it up, if most of them stay together, because they have so much fun win or lose.”

Matthews, who made 25 in the final, has decided to call it quits.

“To watch it (local women’s cricket) grow from what it started as is pretty exciting,” the 38-year-old said.

“I’ll be very happy to sit on the sidelines now and watch it continue to grow and see more and more young girls coming up playing cricket, which is awesome.”

The local women’s competition now boasts two tiers of six teams, and there is a Sunshine Coast representative club (the Scorchers) who play in the state’s first and second grade competitions.