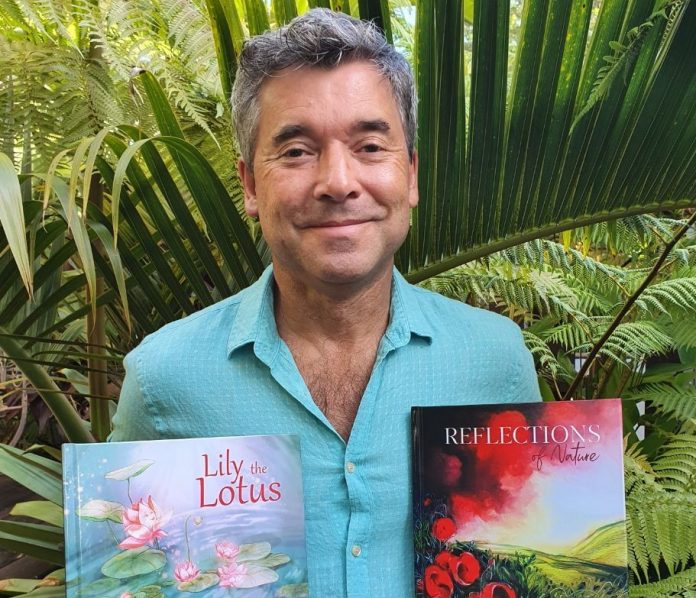 Writing has been a passion of Buderim’s Gerard Traub for more than 30 years and he is now celebrating the release of two books inspired by his passions for eastern culture and nature.

Working in special needs and aged care for the past 35 years, the 58-year-old has continued to explore his creative passion, beginning his publishing journey in early 2020.

“I began writing poetry at the age of 20, and have been writing ever since,” he says.

“I have explored and enjoyed other creative avenues such as drawing, painting and ceramic sculpture, but writing has always been closest to my heart.”

His children’s story Lily the Lotus and poetry book Reflections of Nature were released just before Christmas, with Lily the Lotus already gaining international attention with an endorsement from the Duchess of York, Sarah Ferguson.

“My children’s story Lily the Lotus came to me one morning back in 2003,” Mr Traub says.

“It is a story about young Lily who dreams of a greater world beyond her own, and, from an innocent seed, blossoms into a beautiful lotus flower.”

The symbolism of the lotus flower comes from Mr Traub’s interest in eastern culture and Lily is the name of his late grandmother.

“Since my very early childhood, I have been interested in ancient cultures, and a little later in [life] traditional eastern philosophy and spirituality,” he says.

“I actually travelled to China in the early 90s as a student of Qigong, a traditional practice including exercise and meditation.

“There, I saw huge lotus flowers growing in lakes as far as the eye could see.”

Mr Traub says his poetry book is more like a collection of brief meditations speaking of his love of nature.

“I am hoping that Reflections of Nature will inspire the reader to wander into nature and surrender to its surrounds.”

Mr Traub hopes to continue his journey as a published author, exploring poetry, philosophy and possibly another children’s story.

“I have many other writings still waiting to see the light of day.

“It has been an inspiring journey from my long and predominantly solitary affair with writing, to one of a supportive collaboration within my new world of publishing and authorship.”

Both books are available at gerardtraub.com, Booktopia and Amazon.