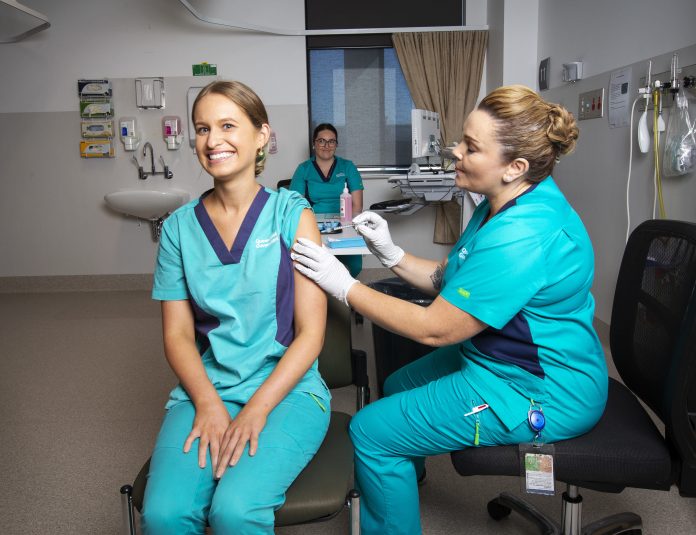 The Sunshine Coast will wait its turn as Australia’s largest-ever vaccine program begins, with Queensland beating its own target and delivering more than 170 jabs on day one.

Gold Coast nurse Zoe Park was the first Queenslander to get the Pfizer vaccine at Gold Coast University Hospital.

The vaccine will be rolled out in north and south Brisbane on Wednesday and then Cairns on Friday.

The plan is to vaccinate at least 1000 people by the end of this week and then rapidly ramp up to 10,000 people next week.

The Sunshine Coast has not been set a date yet but seven suburbs are in line for aged care vaccines which fall under the responsibility of the federal government.

AMA Sunshine Coast branch president Dr Roger Faint said local doctors had still not been given information about when the immunisation program would start.

Ms Park, a COVID-19 ward nurse, said the vaccine would give her much more confidence about keeping the virus away from the public and about going home to her family after shifts.

“It’s really sad what it has done to the patients affected and their families.

“It’s really scary for healthcare workers to be going home and potentially exposing their family to that as well, so (the vaccine is) very exciting.”

Premier Annastacia Palaszczuk said the first phase of the vaccine rollout in Queensland would cover about 125,000 people – about 37,000 in the hotel quarantine system and 88,000 in care settings.

The next phase would include one million Queenslanders including those aged over 70, all healthcare workers, Indigenous Australians aged over 55, Queenslanders with a disability and emergency service teams.

All adult Queenslanders will be vaccinated by the end of October and Ms Palaszczuk implored her state’s residents to remain patient.

“This is to ensure that we get the vaccine out to where it’s needed the most, our frontline hotel quarantine workers and for the Commonwealth, aged care workers and residents,” Ms Palaszczuk told reporters on Sunday.

“We’ll be keeping you updated every step of the way so there’s no need to panic – we don’t have any community transmission in Queensland.”

Health Minister Yvette D’Ath said it was a historic day, coming just more than a year after the first case appeared in the state.

She said the vaccine was the best way to protect the public and return to normalcy.

Gold Coast University Hospital was set to administer 100 jabs on Monday but is now aiming for 180.

Chief Health Officer Jeannette Young said the vaccine was so valuable that clinicians were unable to practise with the real jab.

She was relieved the first vaccine was administered without incident.

“One down, five million minus one to go,” Dr Young said.

Queensland’s first COVID-19 case was reported in a traveller on January 28, 2020.

Dr Young said she had desperately hoped there would be a vaccine but she could not believe the day had come so quickly.

Ms D’Ath said people still needed to remain vigilant, including staying home and getting tested if they had symptoms.

“We understand the importance of national leaders being seen to have the vaccine to instil a sense of confidence to all Australians that the vaccine is safe,” Mr Marles told reporters on Sunday.

“So we understand why that’s taken place and we support that.”

“The vaccines being rolled out have gone through rigorous approval processes by the Therapeutic Goods Administration, which is one of the best regulators of its kind in the world.”

Pfizer’s managing director for Australia and New Zealand, Anne Harris, hailed Sunday as “momentous … for Australians, for science, and a proud day for Pfizer”.

She said Pfizer had already delivered more than 80 million doses of vaccine in 60 countries and had a 99.9 per cent success rate in getting them to their destination within the required temperate of -70 degrees.

Health Minister Greg Hunt confirmed he and the head of the Health Department and former chief medical officer Brendan Murphy would get the alternative AstraZeneca jab when it became available at a later date.

The rollout commences with around 60,000 Pfizer vaccine doses to be administered to priority groups.

The government is committed to offer COVID-19 vaccines to all Australians by the end of October.

The government has set up a simple, multi-language vaccine eligibility checker – australia.gov.au – for people to learn an approximate time frame for when they will be able to get a jab.

There were no locally acquired COVID-19 cases reported across the country on Sunday, but there were three infections in NSW quarantine, two in South Australia and one in Western Australia.